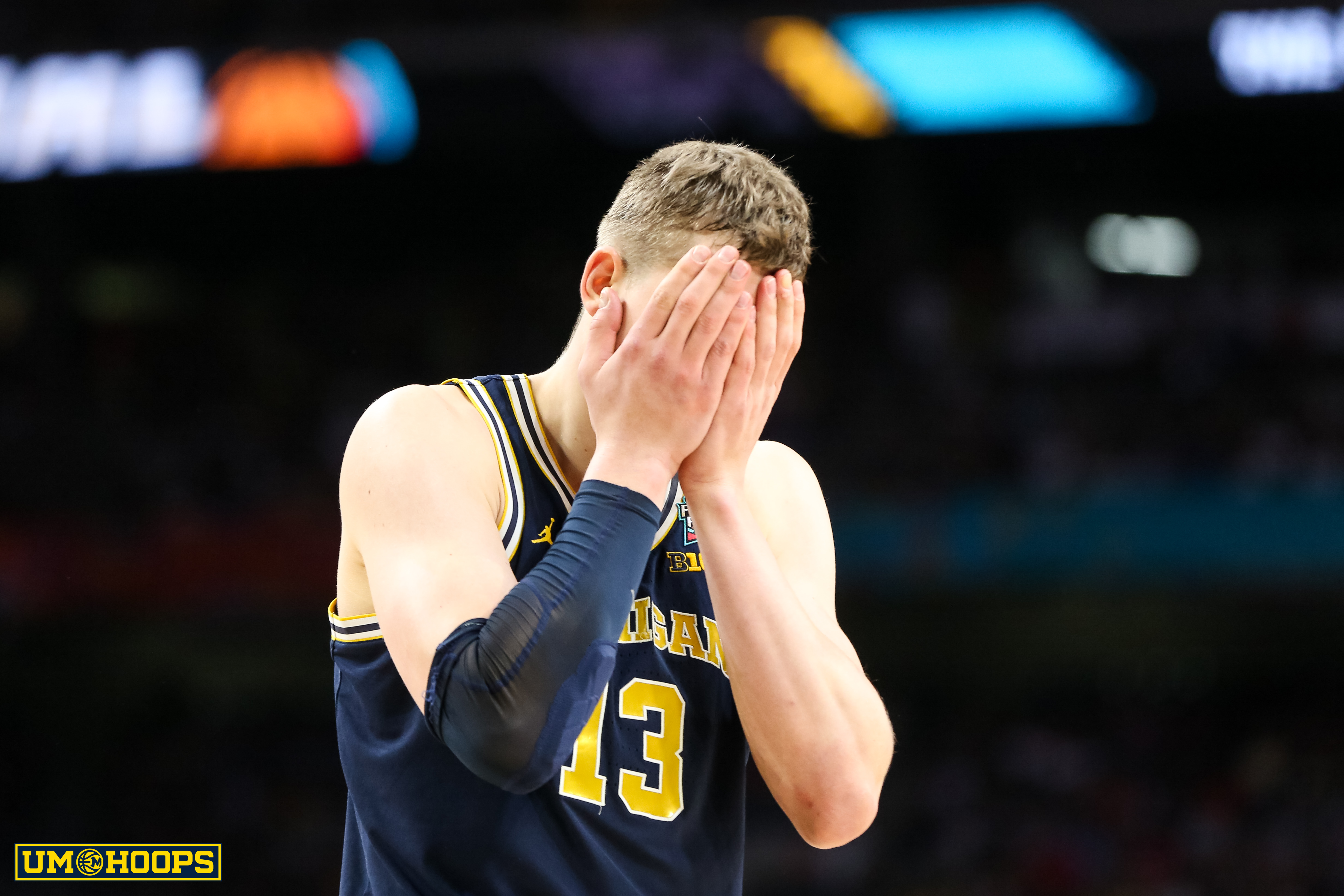 Back in October, I solicited over/under propositions and made my projections. Now that the 41-game season is in the books, here’s a look back at what went as expected and where things deviated.

Back in October, I solicited over/under propositions and made my projections. Now that the 41-game season is in the books, here’s a look back at what went as expected and where things deviated.

Overall, it wasn’t a great year for my projections as I finished with just an 18-12-2 record. Here’s a look back through the projections, both my picks and public voting, as well as what actually happened.

I’m not sure which is more surprising, the fact that no Michigan player managed to reach 40% from 3-point range. Or that Michigan made it to the national championship game without any reliable shooting.

It cost the Wolverines offensively in the NCAA Tournament, but I thought that we’d see at least a couple of 40% 3-point shooters on this roster. Moritz Wagner came close at 39.4% but this turned out to be an easy under.

Over/under: 0.5 freshmen averaging 20 minutes per game or more
My Pick: UNDER
Public: UNDER (60%)
Result: UNDER

Derrick Walton was the last Michigan freshman to average over 20 minutes per game without a slew of injuries affecting the roster. Aubrey Dawkins did hit the mark the following year, but that was induced by Caris LeVert’s injury. Isaiah Livers (15.1) and Jordan Poole (12.2) eventually cracked the rotation, but didn’t come close to 20 minutes per contest.

Over/under: 1.5 players receive All-Big Ten honors (3rd team or better, no honorable mention)
My Pick: OVER
Public: OVER (75%)
Result: UNDER (1)

Moritz Wagner was the only Michigan player to crack an All-Big Ten team with Muhammad-Ali Abdur-Rahkman earning honorable mention honors.

I didn’t hit many projections dead on, but I got this one even though it took a few extra tournament games. Here’s what I wrote before the year:

Playing off the math above, I think I have Matthews pegged right around 3 attempts per game and we’ll say a 33% clip —  say something like 35 of 105 over a 35 game season. Those would put both of these UNDER by a hair.

Matthews finished the year by making 34 3-pointers on 107 attempts.

Poole made 40 3-pointers which means this bet was never very close considering that the Wolverines ended up playing 41 games.

I’m counting this one as a win on the record, but I didn’t have the situation pegged entirely correctly. I hedged in a follow up and said that Simpson wouldn’t play 25 minutes or more in at least 10 top-100 (KenPom A/B games). He ended up playing 25+ minutes in 19 different top-100 games.

I didn’t think Simpson would be this team’s starting point guard. He proved me (and a lot of other people) dead wrong.

Over/under: 3 double-doubles for Moritz Wagner
My Pick: UNDER
Public: OVER (77%)
Result: OVER (8)

Wagner ended the season with eight double-doubles including his monster performance against Loyola in the Final Four. His improvement as a defensive rebounder surpassed any reasonable expectation. He finished the year ranked in the top-50 in defensive rebounding rate after never seeming to be particularly interested in rebounding in his first two seasons.

File this as one of the most surprising misses of the year for me — also one of the most important. The defense overachieved almost every reasonable expectation this year and its 2-point defense improved from 51.9% allowed to 47.7% allowed despite playing a frontcourt of Moritz Wagner and Duncan Robinson.

I think the over/under nomenclature for these adjusted efficiency ranks might have caused some confusion, but by taking the under I intended to say that Michigan’s offense would be in the top 25. It finished at 35th and was the worst offense on a Beilein NCAA Tournament team since 2011.

I wrote that I would take a see it to believe it approach to Michigan’s defense and they ended the season ranked 3rd nationally in adjusted defensive efficiency. Luke Yaklich, Zavier Simpson and Charles Matthews turned me into a believer.

This might be the worst miss of the year for me. I was all-in on Simmons as Michigan’s starting point guard and that never materialized. He recorded 35 assists in the 41-game season.

November and December pushed this bet to an over as Brooks was inserted into the starting lineup in Maui and held the spot until Big Ten play resumed at Iowa. He only played 33 minutes over the final 20 games of the season, but the rest was history.

I said in the preseason post that I have a hard time justifying redshirts in modern college basketball. There’s too high of a chance that fifth-year is spent somewhere else and the off chance that someone can contribute at all makes it worth attempting to play.

I’m calling this a push because Michigan finished tied for fourth. The unbalanced schedule didn’t help, but once again the Wolverines were able to use the league tournament as a proving ground.

I believe the only technical that Wagner was whistled for came in the National Championship game and that was for an altercation with Omari Spellman rather than arguing calls.

Watson checked in at 5.2 minutes per game and reached double digit minutes in four games all year as he fell behind Jordan Poole in the rotation.

I was surprised to see that reader votes pegged this as an over as it felt like an easy under to me. There’s only room for two big men to play significant minutes in Michigan’s rotation and it is hard for the No. 2 and No. 3 guy in the center rotation to come close to 7 and 7 per game.

Michigan’s 3-point gap defense was in full effect in 2017-18 and made this an easy under.

Almost everyone had this pegged as an over, but hitting 13 conference wins exceeded my expectations. On the other hand, I thought the Big Ten might have been marginally better than it ended up last year.

I picked the over because I thought Michigan could make the Sweet 16, instead the Wolverines went on a run to San Antonio and smashed this total.

Not only did I project that at least four Michigan players would average at least 29 minutes per game, I included Jaaron Simmons as one of the four.

In actuality, Charles Matthews and Muhammad-Ali Abdur-Rahkman were the only two Wolverines to make that mark. Simmons averaged 8 minutes per contest.

This was an easy over and Michigan’s win at Texas pushed the Wolverines above my expectations for the non-conference season.

I wrote before the year that Livers had the best path to playing time among the freshmen because Michigan needed something at the four other than Duncan Robinson. I didn’t expect him to crack the starting lineup in league play, but the pick was an easy over.

Muhammad-Ali Abdur-Rahkman, a career 36% 3-point shooter, finished the year at 36.6% from 3-point range. It was hard to peg Abdur-Rahkman above that mark considering that he was always going to end up taking more difficult shots (and using more possessions) as a senior.

0.5, number of national championships
My Pick: UNDER
Public: UNDER (85%)
Result: UNDER

This went under, but painfully only by a game.

Moritz Wagner’s injury pushed this one to an over as it earned Jon Teske a pair of starts in December.

Similar to the number of different starters prop above, Wagner’s injury in December pushed this one over.

Over under 0.5, Big Ten schools directly involved in FBI probe by end of season
My Pick: OVER
Public: OVER (79%)
Result: OVER

We’ll give this one an over because Big Ten schools were mentioned in the Yahoo! report regarding Christian Dawkins’ payments.

An easy under, Michigan wasn’t upset by any mid-majors or low-majors in 2017-18.

Still to be determined

Over/under on players leaving program with eligibility remaining: 2.5
My Pick: UNDER
Public: UNDER (81%)
Result: TBD

Over/under 2.5 future NBA players on the roster
My Pick: UNDER
Public: OVER (53%)
Result: TBD