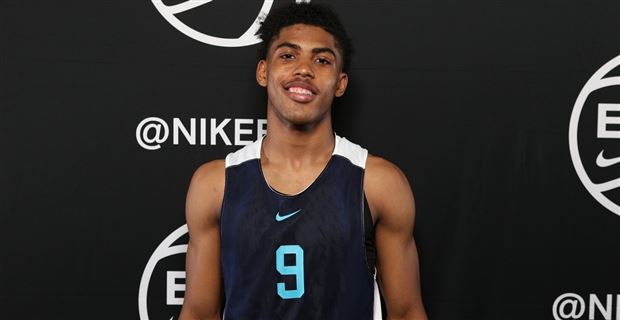 The first thing Juan Rickman noticed about David DeJuilius was his maturity.

When DeJulius walked in the door at East English Village as a junior in high school, he had already cut out fast food. His workouts — boxing and yoga — further cemented the impression onto the coach.

“That’s not common at all,” Rickman said. “… Most guys, they start doing that in the pros or, you know, maybe (later) years in college.”

Dave DeJulius started pushing him as early as elementary school, by David’s recollection. By the time DeJulius was in fifth grade, his dad created a team — though he didn’t coach, worried about the appearance of favoritism — and started pushing his son regularly.

“He was on me about eating healthy and eating right,” DeJulius said. “On me about working out and, ‘Did you work out today?’ Every day he would call and ask me.”

Once DeJulius started playing on the AAU circuit, for The Family, he realized why his dad was pushing so hard. The Family had been an early springboard for NBA careers before, and DeJulius wanted to join that group.

Thus, he took doing so seriously — especially as he barreled through high school, eventually finding East English Village and Rickman.

“As maturity set in, I got to really taking home every aspect of it and understand that hard work is the key to it all,” DeJulius said. “… The game was always real serious, it just, I started realizing what it takes to take it to the next level.”

More importantly than wanting to play at a higher level, DeJulius had the potential to do so. He wasn’t heavily recruited — despite being a four-star, he burst on the scene late — but caught Michigan’s eye the summer going into his junior year, at a team camp.

That was his first contact with the Wolverines. John Beilein told him his jump shot needed more rotation. Still, Michigan liked his game, and had an inside track.

“I told Coach Beilein (that DeJulius) was a kid he needed to recruit,” Rickman said. “And he agreed and he watched him, he liked him.”

Rickman says he told Beilein there would probably be a quick commitment if the Wolverines offered DeJulius. That ended up being more correct than even he realized — DeJulius committed with lightning speed. He says Rickman ended up wanting him to weigh his options for longer.

But Michigan was DeJulius’ dream school, just 45 minutes away from home. He gave a cursory look to other places, but, “I just couldn’t see any other school topping that.”

As recently as last December, as Zavier Simpson was struggling to keep up and Eli Brooks seemed to be starting for lack of a better option, it looked like DeJulius may be thrust into starting at point as soon as he got to campus. Now, Simpson is a cult hero. Brooks fell into obscurity during Michigan’s postseason run, but, a year after Simpson saw massive growth as a sophomore, it would be ignorant to pretend that’s impossible for Brooks.

DeJulius, by all accounts, seems ready to play on Day 1. Anyone who pulls up a highlight can see the kid can score. According to Rickman, his ball-handling and passing are also ready to slot in.

He’s also been getting ready for this since he was in elementary school. That team his dad started? It was called the Michigan Wolverines.