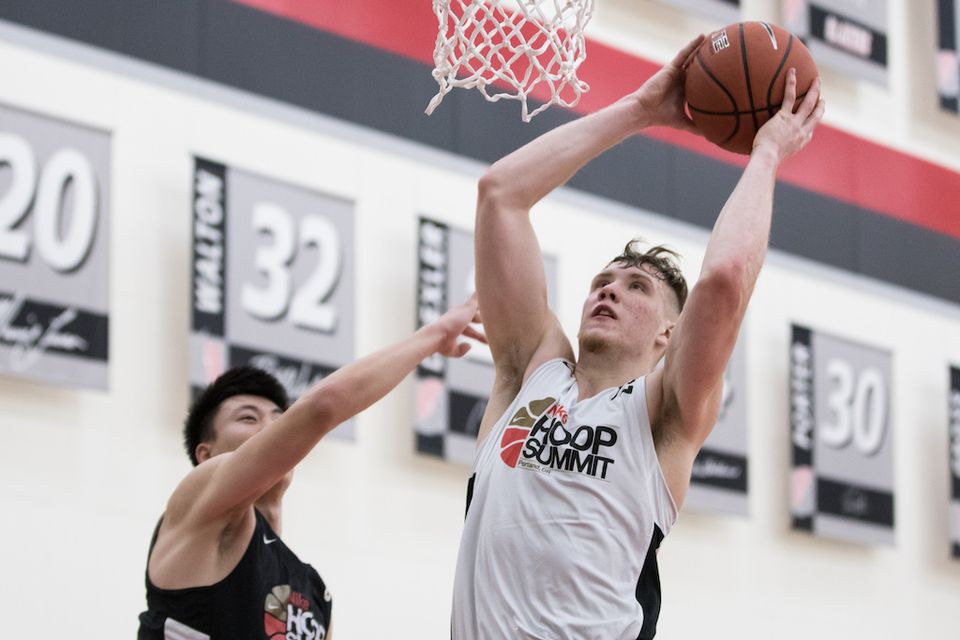 When Ignas Brazdeikis was six, he wanted to be in the NBA.

He started playing around then, showing off an air of self-confidence the incoming freshman still possesses, telling his father he would get to the league and be one of the best players ever.

That doesn’t make Brazdeikis unique — there are a lot of six-year olds with a lot of hoop dreams. Most eventually come to realize they won’t fulfill them, but at six, there’s little reason to check such ambition. What makes Brazdeikis unique is that he has a good shot at fulfilling his goal.

RELATED: Video Breakdown: How Ignas Brazdeikis will fit at Michigan

He comes to Michigan the most-heralded member of the most-heralded recruiting class John Beilein has netted since 2012, a 6-foot-8 pure scorer, full of confidence. Asked how he might tell someone to defend him, Brazdeikis pauses for a beat.

“I would say try your best,” he says, “but you probably won’t even have a chance.”

Beilein came up to Orangeville Prep in Ontario to watch Brazdeikis practice early in his Grade 12 year. He stunk up the joint.

“I couldn’t hit shots, no, ok,” Brazdeikis explained. “My biggest issue was that I was obviously like the best on the team, like at Orangeville Prep, in my grade school every year. And we were scrimmaging — whenever we did scrimmage or competing drills, I would just get fouled every time I would try to do something. And you know, I wanted to impress Coach B and I — and also on top of that, I wasn’t hitting shots — and I got frustrated, I showed my frustration. I didn’t look like a leader.”

From there, the Wolverines’ recruitment of Brazdeikis went cold. Jeff Meyer, the assistant who had been his primary recruiter, stopped contacting him. The four-star had rooted for Michigan growing up and counts Nik Stauskas as a mentor, but wouldn’t follow his footsteps to Ann Arbor.

That changed after an Nike Elite Youth Basketball League (EYBL) session in Virginia the following summer. Brazdeikis was one of the leading scorers, bursting on the scene as an elite prospect. A barrage of calls and texts from high-major programs came the next day, including one from Beilein, offer in hand, for 2017 or ‘18.

Brazdeikis, who had the option to reclassify from other schools as well, chose to take the prep year. Despite the pause in recruiting him though, Michigan stuck out among a sea of offers.

An official visit was soon set for last September, along with trips to Vanderbilt and Florida. Brazdeikis was open-minded, but didn’t know what to expect. The Wolverines had been inconsistent in recruiting him — there was reason to be downright apprehensive.

Then, the visit went perfectly.

Brazdeikis came in armed with questions for Beilein. He asked about playing time, and Beilein told him if he was good enough to play, he’d play. Brazdeikis thrives on competition. He loved that answer.

He asked how Beilein could help get him to the NBA, the type of question Michigan can now answer by smiling and pointing to the results. He heard what he wanted to hear.

Then he asked about the elephant in the room: that practice, and what followed. Beilein said he thought Meyer, who left the program to become an assistant under LaVall Jordan at Butler last June, had kept in contact with Brazdeikis. But he also made a remarkable admission.

“He said he was trying to recruit a guy like a wolf, that hunts for shots, makes plays, does everything on the court,” Brazdeikis said. “And he told me he didn’t see that in me during that practice. Which I completely understand.

“But then when he watched me in EYBL — and then I remember, Jeff Meyer was at my game when I had 42 (points) in the second session — and he, they knew then that I was that player.”

Brazdeikis took the visit to Vanderbilt, but his recruitment was already, for all intents and purposes, over. He cancelled the trip to Florida, committing a week before he would’ve gone to Gainesville.

“Iggy raved about (the visit to Michigan),” Nate Johnson, his coach at Orangeville Prep, said. “And just the look in his face, him talking about his visit, his experiences, I kinda knew in my heart that he — there’s nowhere else he would rather be than Michigan.”

Johnson gushes about Brazdeikis, putting him in the same class as Jamal Murray and Thon Maker, two NBA players that have also come through his program. He calls Brazdeikis the most unique scorer he’s come across, already adept at angles with the ability to finish with both hands.

Brazdeikis concurs that he’s unorthodox, and sees it as a virtue. Like when he was six, he harbors big dreams. The only difference is now, they’ve turned into expectations.