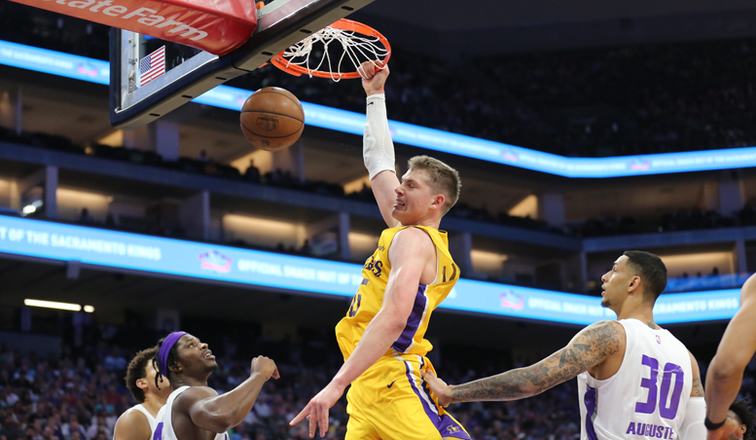 The NBA Summer League is in session and several former Wolverines have stood out including Moritz Wagner, Derrick Walton Jr., Duncan Robinson and DJ Wilson.

Moritz Wagner was drafted in the first round by the Los Angeles Lakers and will join forces with LeBron James in 2018-19. Sunday’s news that Brook Lopez signed with the Milwaukee Bucks means that Wagner is one of just three centers on the Laker roster next year along with JaVale McGee and Ivica Zubac.

The former Wolverine should have every opportunity to carve out a role as a stretch big man to space the floor around James. Wagner has been excelling in NBA Summer League action, drawing rave reviews at both the Sacramento California Classic and now the Las Vegas Summer League.

Wagner hasn’t shot the ball that well, and has still shown the tendency to end up in foul trouble, but his offensive skill has been obvious and he’s put up big numbers. His energy and intensity have opened eyes in Los Angeles, while questions about his defense remain.

“I’m not gonna change just because it’s the NBA,” Wagner had said. “I’m the same player. I’m a confident guy. I’m just gonna be myself, and I’ll be smiling the whole time.”

“That’s the fun of it,” he said. “If you don’t enjoy development and enjoy evolving, you’re not gonna make it far.”

Here’s a look at every made basket by Wagner in Summer League thus far.

Duncan Robinson might not have been projected as a future pro, but the one-time Division III prospect is showing out in NBA Summer League action. Robinson has been active defensively and his 3-point stroke has given the Miami Heat a boost.

After his hot start, talk is heating up that Robinson could earn at least a two-way deal in the NBA this season.

Robinson, who has started every summer league game for the Heat along with Adebayo and is a strong candidate to earn a two-way roster spot with the team, was a bright spot once again.

He finished with 18 points, six rebounds, an assist, a steal and a block and made four three-pointers in 21 minutes. Robinson, 24, averaged 11.3 points per game in the California Class. He’s shooting 61.2 percent (19 of 31) from the field thus far in summer league.

“I feel pretty good,” Robinson said. “A lot of it is just taking good shots. It’s a lot of credit to my teammates finding me in positions to be successful. So I just try to stay aggressive. I get a lot of encouragement from the coaching staff, which is great.”

Robinson, 24, showed us yet again he has more to his game than a good three-point touch. In the first quarter, he drove in for another impressive dunk and then hit a pretty athletic layup in traffic.

“I’m trying to show it on both ends, mix it up and break some labels, stereotypes,” he said.

Some have even written that Robinson could earn a standard contract, not just a two-way deal.

Here’s a look at every made basket by Robinson in Summer League thus far.

Derrick Walton’s first year in the NBA was an example of how the league’s two-way contracts were intended to work. Walton maximized his alotted time with the Miami Heat while still having an opportunity to earn developmental reps with the Sioux Falls Skyforce.

Satisfied with the results, the Heat made Walton a qualifying offer this summer. That offer includes a $50,000 guarantee and makes Walton a restricted free agent. An outside team now can now offer Walton a standard contract which would then allow the Heat to match.

Walton has struggled with his shot in Summer League action, but the Heat are impressed with his defense.

“What’s important to us is he’s playing defense,” Glass said after the Heat’s 86-76 victory over the Kings on Thursday, closing out the Sacramento portion of their summer league winning 2-of-3.

“I think you all have seen it the first three games. He’s really taken a commitment. He wasn’t doing that stuff consistently all year and he’s really taken it upon himself to take the challenge on that end. And he’s battling his butt off.”

“I wasn’t shooting to my normal standards but you go through spells like that,” he said. “I just had to make sure I was doing other things. … just being disruptive, getting us into the offense. Just making other plays. I always know my shot would come but it was satisfying to see one go through today.”

Here’s a look at every made basket and other assists by Walton in Summer League thus far.

DJ Wilson had a quiet first year in Milwaukee, logging only 70 minutes all season. He’s hoping to use Summer League as an opportunity to jump start his NBA career.

“I think with the opportunity I’m going to be given, just make the most of it and run with it,” said Wilson, who has spent the bulk of his time working out in Las Vegas this summer. “This coaching staff, from what I’ve seen, they like players like myself, so once I get comfortable and acclimated with the system I think the sky’s the limit. …
“I’m always motivated, whatever I do. That fire’s always been there. I’m ready to prove what I can do and showcase my abilities.”

Here’s a look at every made basket by Wilson in Summer League thus far.