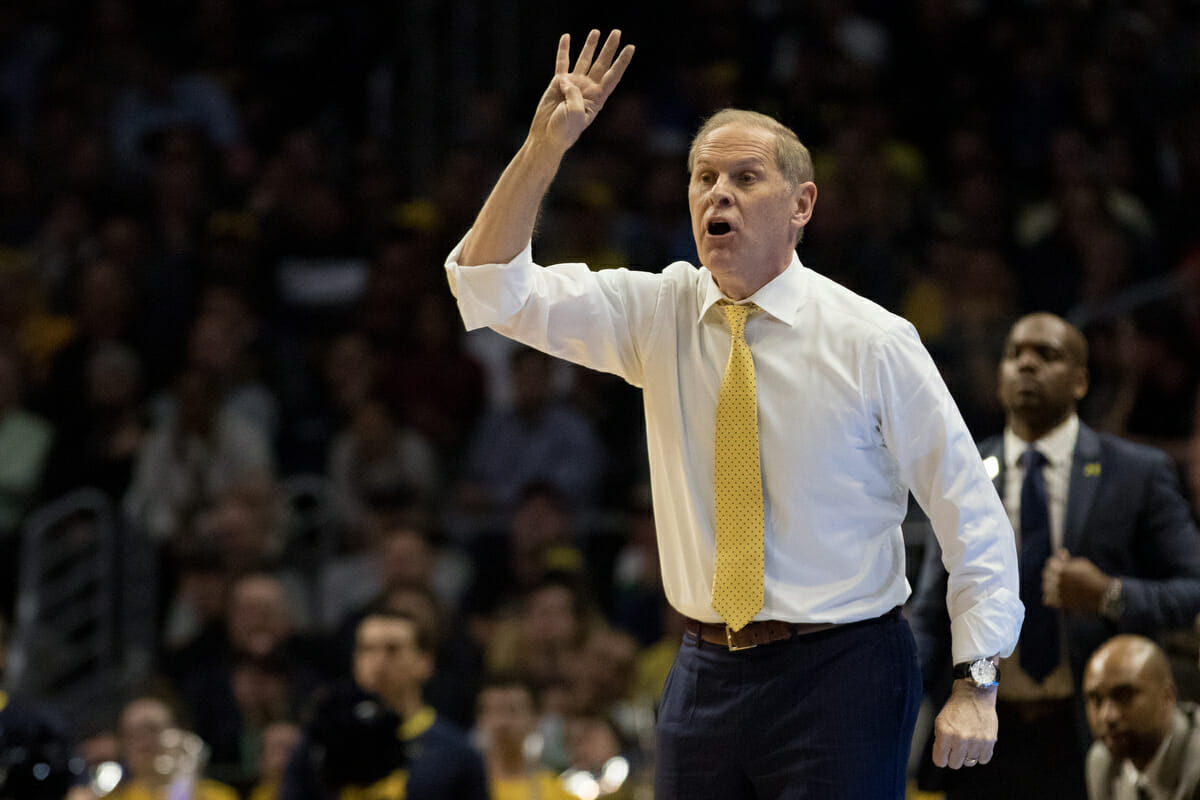 The recruiting calendar and the NBA Draft process are at the center of the NCAA’s approved updates. Here’s a look at the most important changes and what they could mean for Michigan.

Basketball student-athletes can make more frequent campus visits paid for by colleges (referred to as official visits), which can begin as soon as Aug. 1 the summer before their junior year in high school. They can take:

A student-athlete can visit a school only once per year. Unofficial visits — those made at his or her own expense — cannot begin before Aug. 1 of the student’s sophomore year of high school.

Schools now can pay for 28 official visits for recruits (34 for national service academies) over a rolling, two-year period.

High school prospects were previously allotted five official visits (trips to a college campus where all expenses are picked up by the college) to use in their entire recruiting process.

Now prospects will be allowed to use 15 official visits starting in August before their junior year of high school (one per school per year). This is a significant change and one that should benefit Michigan.

Michigan’s offer policy is well established. The Wolverines require a full visit with academic tour and transcripts before offering a scholarship — a significantly higher barrier to entry than some schools which hand out scholarship offers like they are swiping right. That requisite visit can be difficult to setup for prospects who are located outside of Michigan and can’t afford the travel to see campus.

Schools are still limited in the total number of official visits (28 over two years) that they can host, but this will allow Michigan to prioritize younger prospects earlier in the cycle. For example, as attention shifts to the class of 2020 we’ll be able to see priorities emerge via the official visit. “They want me on campus for an official visit this fall” will turn into code for “there’s a scholarship waiting for me in Ann Arbor.”

I’d imagine that most players who take an official visit to Michigan will leave with a scholarship offer.

The recruiting calendar, which creates more restrictions around events not sponsored by high schools, will allow coaches to attend additional high school-sponsored events. The new rules add four-day recruiting periods (Monday through Thursday) in April but do not increase the limit on days individual coaches can recruit.

Also, coaches will be allowed to attend and evaluate recruits at the National Basketball Players Association Top 100 Camp in mid-June. Additionally, coaches will be able to attend events during the last two weekends of June if the events are approved by the National Federation of State High School Associations; organized by groups affiliated with high schools or high school coaching associations; and occur at middle schools, high schools or colleges.

The calendar also allows coaches to attend NCAA youth development camps in late July, a new collaboration between the NCAA, USA Basketball, the NBA and the NBPA.

It was hard to browse Twitter in July without stumbling across an angry opinion about the proposed changes to the college basketball recruiting calendar, but this update doesn’t seem that bad.

There will be Monday through Thursday periods in April when coaches can attend high school events. Coaches will also be able to recruit throughout June at sanctioned high school events during the final two weekends of the month and at the NBPA Top 100 Camp.

There will also be one “youth basketball event” in early July that will be open to coaches along with NCAA youth development camps in late July, which will be organized by the NCAA, USA Basketball, the NBA and the NBPA.

No these changes aren’t going to eliminate impropriety from summer recruiting. Most high schools are sponsored by the same shoe companies that sponsor grassroots programs and there are dirty high school coaches out there too. Not to mention, grassroots basketball isn’t going away. Even if the college coaches aren’t at every grassroots tournament, that doesn’t mean those grassroots coaches can’t still influence decisions and control recruitments.

The focus on high school events probably puts more of an emphasis on high school connections at the regional level, an area where Michigan should be comfortable given John Beileilin’s track record. His connections to programs on the East coast combined with Luke Yaklich’s in Illinois and into the plains should give the Wolverines a nice base to discover new prospects even without sprawling grassroots events.

Gauging how camp evaluation impacts recruiting will be tough to decipher until we see how things play out. The nomination process that’s been thrown around for the youth development camp seems somewhat flawed logistically (schools nominating players they like only makes it more likely that others recruit them), but I’ll reserve judgment until next August.

Undrafted players can return to school*

College basketball players who request an Undergraduate Advisory Committee evaluation, participate in the NBA combine and aren’t drafted can return to school as long as they notify their athletics director of their intent by 5 p.m. the Monday after the draft.

Undrafted players with remaining eligibility now have the option to return to school and continue playing college basketball. This feels like a massive change on its face, but I don’t see the impact being nearly as significant as many expect.

It isn’t as if college players don’t have the opportunity to turn back as things are currently designed. Players receive preliminary feedback from the undergraduate committee and they can test the waters and work out for teams. If they remain in the NBA Draft after both of those steps and still aren’t drafted in June, odds are that they knew they weren’t going to be drafted anyway.

The rule also appears to only apply to players who were invited to the NBA Draft Combine.

Fans will be upset when their star players go undrafted and decide instead to sign a two-way contract or pursue professional opportunities in Europe. There may be other situations where a college program has already moved on and used an early entry’s scholarship on a replacement.

The rule is a nice luxury for players who are on the edge, but I suspect that it won’t make the kind of impact in reality as it does in headlines.

Pending a decision by the NBA and the National Basketball Players Association, high school basketball players can be represented by an agent beginning July 1 before their senior year in high school, provided they have been identified as an elite senior prospect by USA Basketball.

The effective date will be decided if/when the NBA and the NBPA permit high school students to enter the draft.

College basketball players can be represented by an agent beginning after any basketball season if they request an evaluation from the NBA Undergraduate Advisory Committee.

All agreements between agents and high school or college student-athletes must be:

At first this sounds like organized chaos, but a closer reading of the rule makes it clear that this only applies out of season and during the NBA Draft evaluation process. That means that players who are testing the waters can have representation during the process, but they immediately fire their agent when they decide to return to school.

My understanding of the previous rules were that NBA teams could already cover travel and miscellaneous expenses for prospects “testing the waters” so the fact that agents can now cover their travel during this time seems logical.

Agents also “must be certified by an NCAA program with standards for behavior and consequences for violations” which seems like a good preliminary step to clean up the current agent pool.

The NCAA is pursuing agreements with apparel companies on expectations for accountability and transparency regarding their involvement in youth basketball. The NCAA Board of Governors seeks to develop agreements that require apparel companies to make annual disclosures, obtain NCAA certification for all youth basketball activities and report potential NCAA rule violations. Additionally, parties should formalize relationships in areas where interests overlap, such as playing rules and equipment standards.

As a term of employment, school presidents and athletics staff must commit contractually to full cooperation in the investigations and infractions process. Full cooperation means reporting violations in a timely manner; sharing all knowledge and documents requested in a timely manner; providing access to all electronic devices, social media and other technology; and maintaining confidentiality. The chair of the Division I Committee on Infractions or the Independent College Sports Adjudication Panel can impose immediate penalties when schools or individuals do not cooperate (including loss of revenue or postseason opportunities). These bodies can consider lack of cooperation as admission of a violation.

People charged with investigating and resolving NCAA cases can accept information established by another administrative body, including a court of law, government agency, accrediting body or a commission authorized by a school. This will save time and resources previously used to confirm information already adjudicated by another group.

University presidents and chancellors will be personally accountable for their athletics program following the rules. Presidents and chancellors join all athletics staff members in affirming the athletics program meets obligations for monitoring rules compliance, which is required to be eligible for the postseason. Also, schools are required to cooperate fully during NCAA investigations and take appropriate corrective action.

Those who break the rules face stronger penalties, including longer postseason bans (up to five years), longer head coach suspensions (could extend beyond one season), longer employment limitations for coaches and staff who violate rules (potential for lifetime show-cause orders), increased recruiting restrictions and the loss of all revenue associated with the Division I NCAA Men’s Basketball Championship.

Michigan is widely regarded as one of the cleanest programs in college basketball which means that more penalties, more enforcement power and more accountability should only come as a net positive. These rules are in place to build more accountability at the university level, but we won’t know how effective they go into effect.

The NCAA is also creating more independent teams to help with enforcement and investigation of NCAA issues.