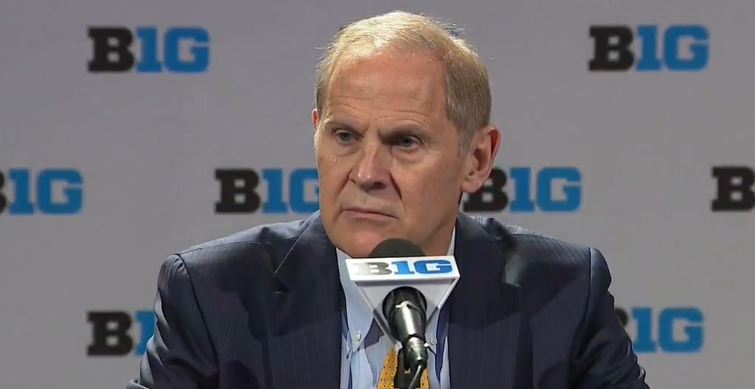 John Beilein was on the podium this morning in Chicago to discuss Michigan’s upcoming season.

Join UM Hoops This Season! For a limited time only, sign up with the promo code PRESEASON to get an annual membership for less than $3/month. That gives you access to our extensive coverage throughout the 2018-19 season.

THE MODERATOR: We are now joined at the podium by Michigan head coach John Beilein. Coach Beilein enters his 12th year with the Wolverines. Coach, if you’d like to begin with an opening statement, we’ll open the floor for questions.

JOHN BEILEIN: Thank you.It is great to be here this year. It’s wonderful to see this. I’ve been 12 years in the league, watching this league continue to grow. I think we’re in for a heck of year. We all know it’s well-documented, we had four teams in last year. There was a reason for that: it’s that we’re a young league, and we have teams that have almost everybody back that are going to be terrific. They’re not going to be the 10th or 11th team in this league like some of you project. They’re really good.

Q. In addition to the scoring, you really lost the heart of your team. I know it’s an issue every year in college basketball. Is it more of a challenge this year to find that blend of leadership, that voice in the locker room after losing so many great veteran players?

JOHN BEILEIN: I think it’s more than just the players,it’s the style we could play. We had a guy Muhammad Ali had 135 assists and 35 turnovers. He led the country in that category. You have a shooting big that can make 69 threes, it changes everything. I have think it’s that. Duncan Robinson, allowed us to play four-on-four.It’s not just that, but the style that we’re going to have to play, we have to adapt again. He we had to adapt last year, midway, to some things. Again, I think that’s what I love: embracing change, trying to change your team both offensively and defensively what can work. I think we have a chance to be a good defensive team again, but I think offensively we’re a work in progress.

JOHN BEILEIN: I think it evolves. We could see itmore this year, I hope we’re right, that with the four hours we could work with kids in the summer, you could see some things. Now, after 10 days of practice,I think today is our 10th day of practice, you can see we’re going to be able to do this. How do you create points? Last year there was no question after four weeks of practice, we weren’t going to be at offensively efficient as we were with Derrick Walton, D.J. Wilson,and Zak Irvin. I said, We’re going to have to spend more time on defense.

Q. You went to the national championship game now twice I think in five years. What is your overall thought? Is there regret obviously that a lot of coaches coach for 10, 20 years, never get there,even to a Final Four? For you to have been there twice and not won it… Could you look at it and say,We must be doing something right to get to the Final Four, to play for the championship? If we just stay the course, we will break through at some point?

JOHN BEILEIN: I mean, that’s a great question. I think my regrets are that I wasn’t able to lead those kids to win it. I say this as honestly as I can say anything.Nothing about me personally. This is not going to define me as a coach, whether it could win this thing.It’s about what could I have done better to get Moe Wagner, Duncan, Muhammad, all our guys to championship last year?

This is a thing with our league, we have had –Wisconsin has been there a couple times, Michigan State has been there, we’ve been there, last 10 years.We’re right there. This is a referee’s call, this a ball bounce the wrong way, this is an injury away from us winning, it’s that simple. It will all come back around.Our programs are just too good not to win a National Championship somewhere along the line.

JOHN BEILEIN: First, I didn’t think I would like the 20.But scheduling is so difficult, trying to get teams to play you home and home. We’ve been able to really do a good job with that. It’s really hard.If Jim said we’re going to go to 22 or 24, what do you think about going to 26? This is crazy now, I’d say, You know what, let’s do it. Scheduling is really, really hard.Right now we have 25 or 26 — I think we have power 5 type of games. Obviously counting the Big East being in that. That’s really good.But that is hard to schedule home and home. Getting home games for your students in December is everything. If you were with our games last year, with Ohio State — I’m sorry, home with Indiana, away at Ohio State, that first weekend in December, packed arenas, it was great. One of the best moves we’ve made is play in December and expand the schedule.Who knows where it could go from here.

Q. In regards to the federal trial that’s ongoing,were you aware of the allegations that came out about former Michigan receiver Tai Streets?

JOHN BEILEIN: Somebody just mentioned that to me.I don’t know enough about it right now.

Q. Is there any concern about potential violation?

JOHN BEILEIN: I don’t think you ever have to worry about us and that in any area.

THE MODERATOR: Coach, thank you.

JOHN BEILEIN: Thank you very much.