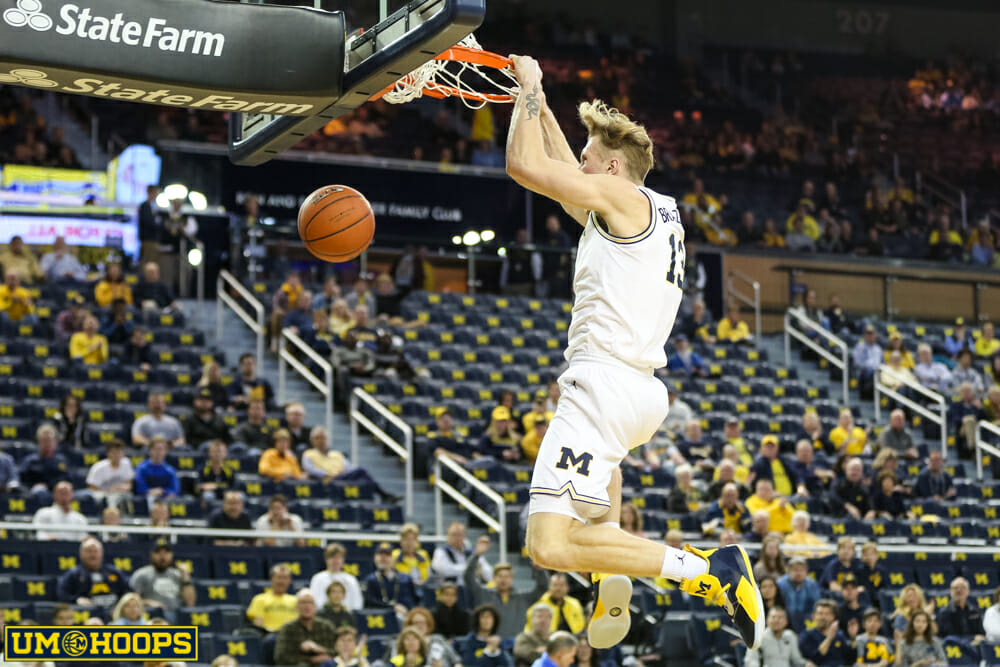 Michigan won its exhibition game against Northwood on Friday night. There weren’t many pivotal moments in a game that Michigan led throughout and won by 32 points, but here’s a look at some key players and wrinkles from the exhibition win.

This was the first opportunity for Michigan fans to see Ignas Brazdeikis live and in person and he answered the hype. As expected, Brazdeikis started for Michigan at the four position. When the half time box score was handed out on press row, Brazdeikis was leading the way with 11 points in the first period.

The first thing that stood out about the 6-foot-7 forward on the court is that he doesn’t need to dominate the basketball to score. Brazdeikis was more active defensively than I expected, helping force a turnover on his first transition dunk, and his feel for the game helps him catch the ball in dangerous positions.

My favorite wrinkle of this sequence is Michigan using Brazdeikis as a pick-and-pop screener. He catches the ball at the top of the key and can easily drive by a recovering defender. That’s an area of the game where Moritz Wagner excelled and should be a nice wrinkle for Michigan’s offense against teams with more traditional power forawrds.

“He’s just gotta make (3-pointers) in games and become that real triple threat player because he goes downhill he’s hard (to stop),” John Beilein said after the win. He’s ambidextrous so he’s going to finish with either hand. The next step is to slow down, have the threat of the jump shot, which he really has. He just hasn’t done it yet in any of these games.”

Teams will load up against the drive — Brazdeikis was whistled for two offensive fouls in his debut — but his ability to drive downhill and finish with either hand gives Beilein a dangerous weapon to draw plays for.