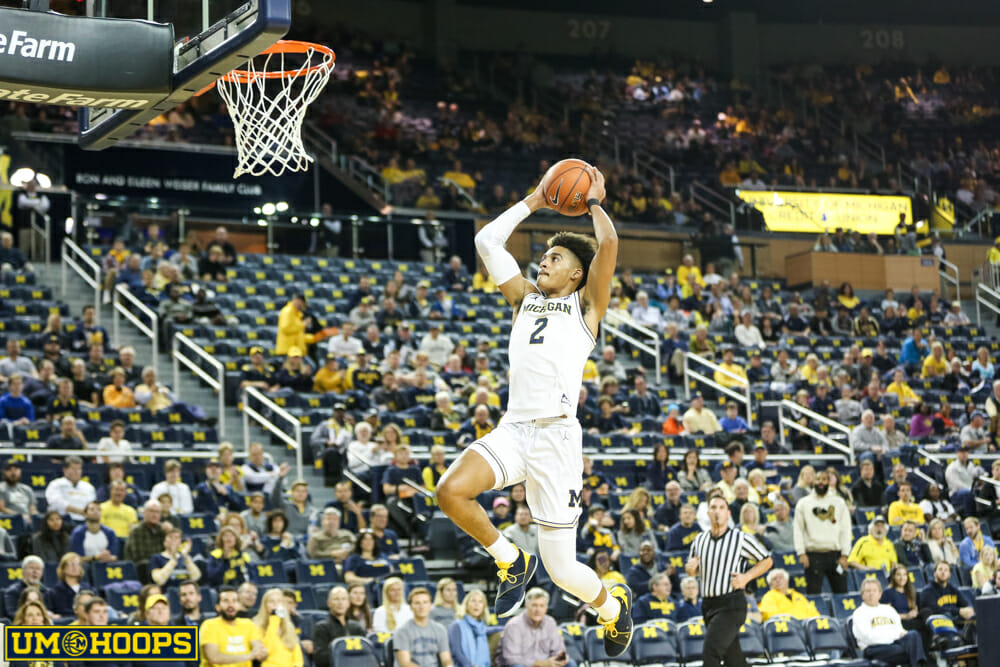 After notching eight assists in Michigan’s exhibition game against Northwood, Jordan Poole is looking to become more of a facilitator this season — and he’ll certainly need to with the loss of former Wolverines’ guard Muhammad-Ali Abdur-Rahkman.

Although he mentioned that Abdur-Rahkman taught him a lot of those facilitating and lead-guard skills, Poole played much of his time perched out on the wing and got rid of the ball quickly most of the times he touched it — usually with a shot.

STATE OF THE BLOG: November is our State of the Blog Pledge Drive. If you haven’t joined UM Hoops, now is the time. For just $2.67 per month, you get access to all our members-only content, videos and analysis throughout the season. Join today with promo code SOTB.

This year, Poole will start at the two rather than the three and will have to transition into a playmaker. Poole can still play the three and shoulder a larger scoring role in certain situations, but his focus has been on adapting to playing the two-guard.

“It’s different bro,” Poole joked about the shift.”It’s extremely different. The three is always in the corner and can only run select plays while the two is coming off more ball screens and driving. I was able to attack more at the three last year and go ahead and get a bucket, but the two I’m able to facilitate more and find guys who are open, be a playmaker.”

Michigan needs Poole’s ability to facilitate and early returns are that he looks comfortable in his new role. As Michigan’s most dynamic shooter off the dribble, he has the highest ceiling as a ball screen facilitator on the roster.

An ankle injury during preseason practice might have caused Isaiah Livers to slip down the depth chart, but John Beilein still has lofty expectations for his 6-foot-7 sophomore.

If Poole, Charles Matthews or Ignas Brazdeikis need a blow early in the season, expect Livers to enter the game.

For his part, Livers seems comfortable in the role coming off the bench.

“It’s way different from my role last year. Last year I came in and started at the four so it was offensive rebounding, rebounding, defense, locking up my man, making open shots. Now it’s more of sometimes I have to create my own shot, create shots for others. It is different playing out of ball screens.”

Livers could play a more important role on this year’s team as a super-sub than he did last year as a psuedo-starter. It was just one exhibition game, but Livers played more second half minutes than Brazdeikis, who started at the four.

The team isn’t shying away from what tonight’s banner-raising means to them. Although the general platitudes of “that was that year, this is this year” were passed around, Poole said that he was excited to see the team two years ago in the Big Ten Tournament, get lauded, and surpass the tin his first season in Ann Arbor.

John Beilein isn’t as worried about the banners, spending his time focusing on preparation for the season.

“I never live in the past very much unless it really haunts me,” said Michigan coach John Beilein. “ … and I don’t remember all of the success very well, and I probably should. So I’m just going to focus on this year. But I’m sure when that banner goes up I’ll be very proud.”

The Wolverines voted on captains which will be announced sometime before tonight’s game. Poole voted for redshirt junior guard Charles Matthews, junior guard Zavier Simpson and junior big man Jon Teske. While many players will be stepping into significant roles, there’s little question that Simpson and Matthews are this team’s leaders.

“We did vote on them, but I haven’t announced it to the team yet so you’ll have to wait,” Beilein said of the captains. “It will not be a big surprise.”