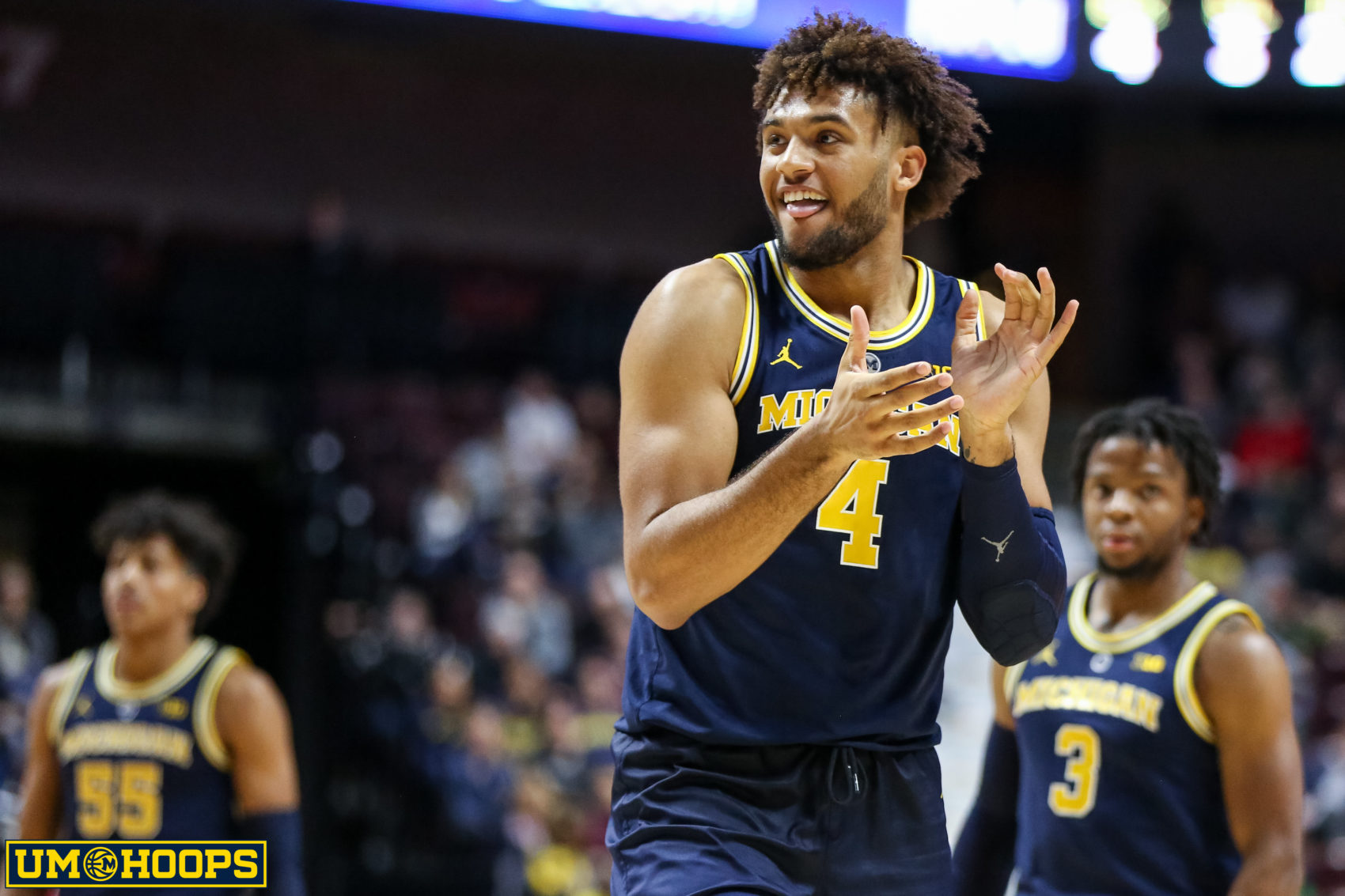 Almost exactly a year ago, Michigan and North Carolina met in the ACC/Big Ten Challenge in Chapel Hill. The game was competitive for the first few minutes, but the Tar Heels pulled away and led by as much as 29 points in the second half.

This Wednesday, the ACC/Big Ten Challenge is coming to Ann Arbor and the Wolverines are hoping for a different outcome.

“It’s way different than it was last year,” said sophomore forward Isaiah Livers. “I was like, ‘Whoa, we’re going to North Carolina.’ I was just a young little freshman. Now, it’s just like, ‘Okay, it’s time to take care of business.’ I have to lead some of my troops. Help (Ignas Brazdeikis), guys like Brandon (Johns), David (DeJulius) get ready. It’s about to be a big game, and these are the type of games where you have to follow principles, or it can go the wrong way.”

While Michigan is looking to improve on last year’s result, the Tar Heels are a talented team that will provide Michigan’s first test at home this season.

“I’m excited to have a chance to play against a great North Carolina team,” said Michigan coach John Beilein. “They’ve just reloaded incredibly. They’ve got tremendous players. They really put it on us last year. It was almost the same script as the Villanova championship game. … We’re going to have to play better than we did last year.”

North Carolina’s reload has gotten off to a 6-1 start with wins over Stanford and UCLA. The Tar Heels feature All-American senior Luke Maye along with a pair of five-starr freshmen in starting point guard Coby White and projected lottery pick Nassir Little.

The Tar Heels are known for their offense in transition. The Carolina fast break is hard to defend, and the Wolverines will have to be quick in getting back on defense to prevent UNC from scoring lots of fast-break points.

“When I think about (North Carolina coach Roy Williams’) teams at Kansas, it’s like, when they are running, they are running downhill,” Beilein said. “It’s like a freight train coming at you. Their big’s running the rim, one following, guys really running lanes. Always got a deep outlet. Terrific point guard. It’s really hard to do that.

“We have to make sure we get back and can set our defense as much as we can, but the Carolina break, the Kansas break, whatever you want to call it, it moves so fast. They caused it a lot to start the game last year. … It comes quicker than you think.”

But in contrast to last year’s matchup, where Michigan struggled to contain UNC’s offense, this year’s team boasts the No. 1 defense in the nation, according to KenPom. And with Michigan’s ability to go small with Livers at the ‘5’ or play a traditional big in junior center Jon Teske, the defensive flexibility may help the Wolverines find more success this time around.

“North Carolina’s going to play fast no matter what,” Livers said. “We have to match their speed on our transition defense. We have to get back and make sure someone’s guarding the post.”

Freshman forward Ignas Brazdeikis has impressed so far this season, especially for a first-year player in Beilein’s system. He’s seen time at both the ‘2’ and the ‘4’ and seems to have no fear of any opponent. Brazdeikis scored 18 points at Villanova earlier this year and he fully embraced that road atmosphere.

And while Brazdeikis came into the season expected to contribute heavily, his improvement through the first six games has been notable.

“He’s slowing down. At first, I know he used to just like dribble, dribble, dribble, put his head down, but I’ve noticed he’s learning,” Livers said. “He’s sitting down. A lot of freshmen don’t do that, they kind of keep making the same mistakes, but what I’ve seen him from him is tremendous growth. Every day I tell him how proud I am of him.”

For a freshman still finding his way in the Michigan offense, Brazdeikis has had no trouble producing. He’s leading the Wolverines in scoring at 15.7 points despite playing just 26.2 minutes per game.