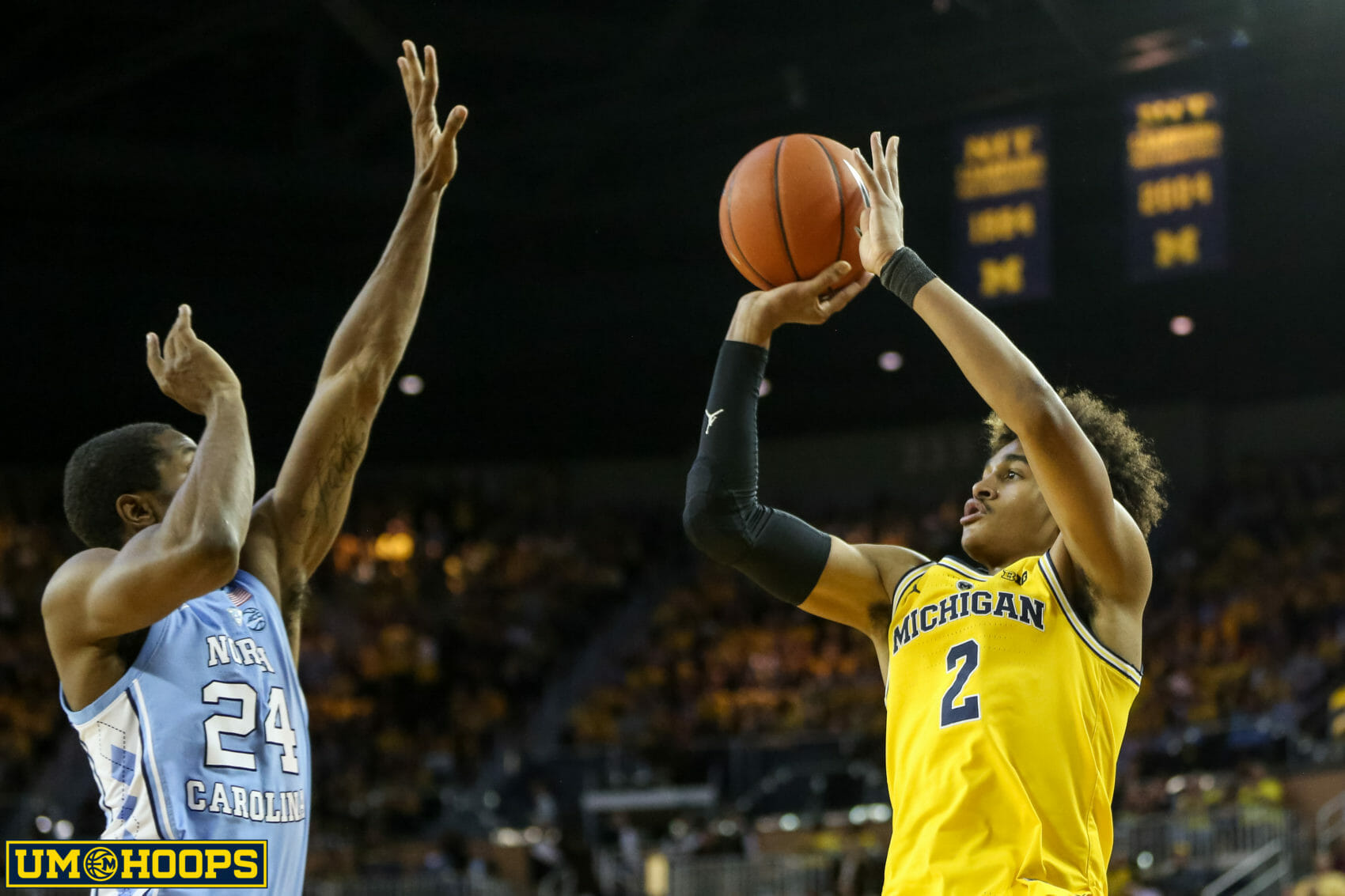 When looking at the Jordan Poole’s game against North Carolina two particular plays stand out.

Standing out on the right wing, guarded by Tar Heels guard Cameron Johnson, Poole used a crossover to get to the free-throw line, twisted his body and spun to the rack for an uncontested layup.

And to end the game, Poole jabbed his foot forward, and almost falling over, took a sharp 30-foot stepback at the end of the shot clock, and swished it.

Plays like these were not something that Poole consistently worked into his game last year. Seemingly, every herky-jerky dazzling move was accompanied by another turnover or an ill-advised shot. This season though, Poole has a 1.61 assist-to-turnover ratio, as compared to 1.0  last season.

“That’s something that I’ve been amping up a lot over the summer, but especially over the last few weeks,” Poole said. “There’s not a lot of times in our offense where you going to be able to put the ball on the floor, but I have definitely been able to pick up on my ball handling over the past couple weeks. With North Carolina, I was able to look at the film and see that my ball handling has gotten much tighter.”

Poole’s ability to have the ball on a string when given the chance to adds a new dimension to Michigan’s offense. If mugged down in isolation situations, Poole gives Michigan potentially a fourth dynamic ball handler, along with Charles Matthews, Zavier Simpson, and Ignas Brazdeikis.

The junior point guard waxed on his days playing defense and cornerback as a child while speaking to reporters at Crisler. Though he didn’t make a direct physical connection to college basketball defense, Beilein didn’t hesitate to do so.

“They know it’s going to be tough points against us,” Beilein said. “It’s like in football, where you have a great shutdown cornerback and you play him man-to-man and he’s fine.”

Simpson has flourished in one-on-one defensive battles since he became Michigan’s starting point guard last season. On Wednesday, he held North Carolina’s star freshman Coby White to 12 points and no 3-pointers after he hit 14 shots from beyond the arc in the three games prior.

Edwards, who’s currently eighth in the nation in scoring and 3s made, is a stiff challenge for Simpson. Still, in the same way that Darrelle Revis gave NFL receivers nightmares for decades, Simpson has established himself as a bona fide shutdown force, this season’s start, last season’s Big Ten Tournament, and the two games where he held Edwards under 13 points last year all echo that.

“Moe Wagner never wants to see him again,” Beilein said. “Now what Haarms does, is that he’s going to block a shot every 11 minutes, Jon Teske will block one every ten minutes … That’s the challenge with him. You might be able to back up under him or shoot on him, but Haarms is more mobile defensively.”

Though he averages 1.6 blocks per game and is a defensive factor, Haarms is not the same offensive presence as his predecessor. Purdue, like Michigan, also has the option to go small at the center position with Dartmouth transfer Evan Boudreaux.