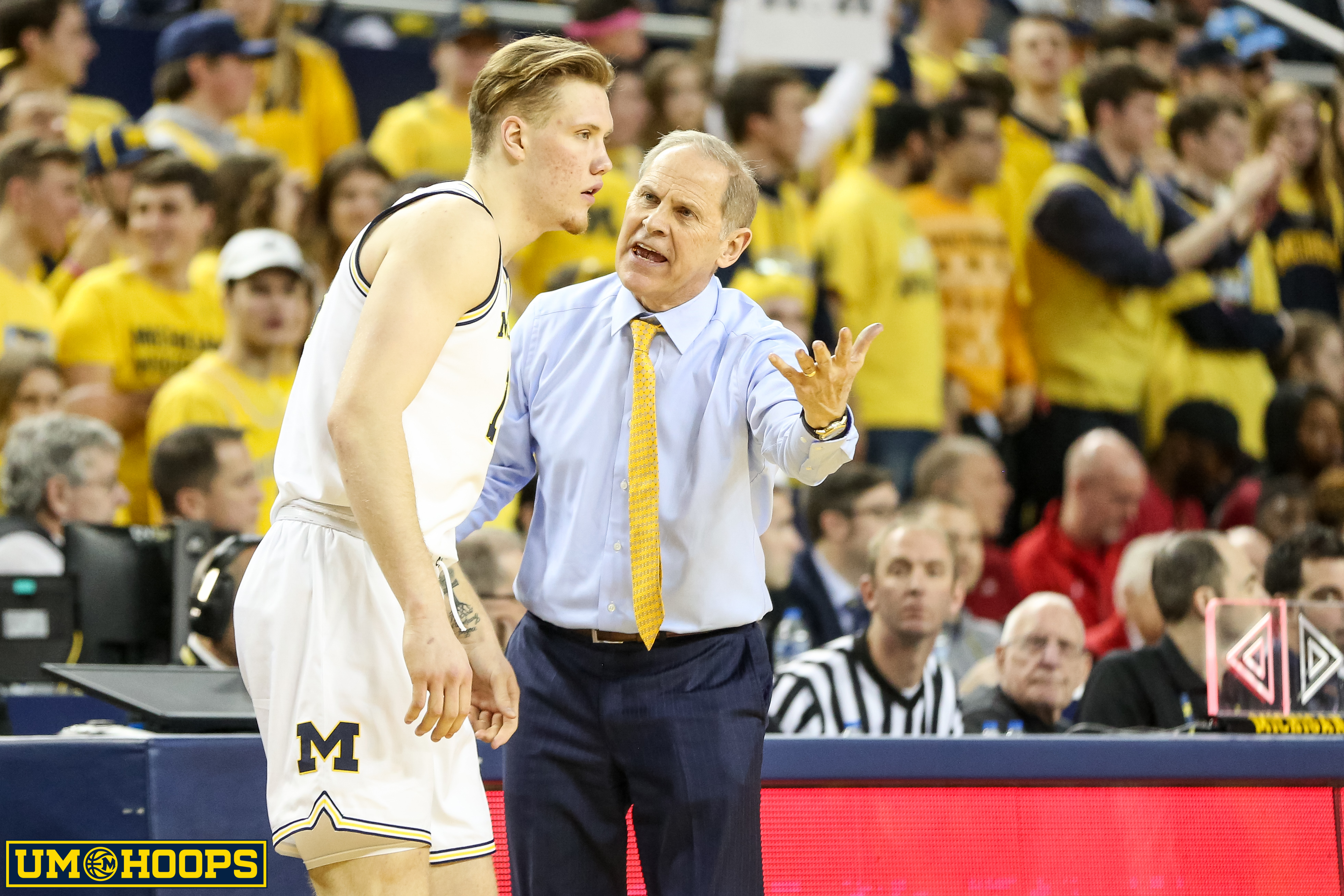 The NCAA Tournament Selection Committee unveiled its annual sneak peek at the top 16 teams on the seeding curve on Saturday afternoon.

The Wolverines were ranked 6th on the committee’s mock bracket, behind Duke, Tennessee, Virginia, Gonzaga and Kentucky. They were bracketed as the No. 2 seed in the East region. In that hypothetical bracket, Michigan would open the NCAA Tournament in Des Moines and be on a crash course with Duke in the Elite Eight. 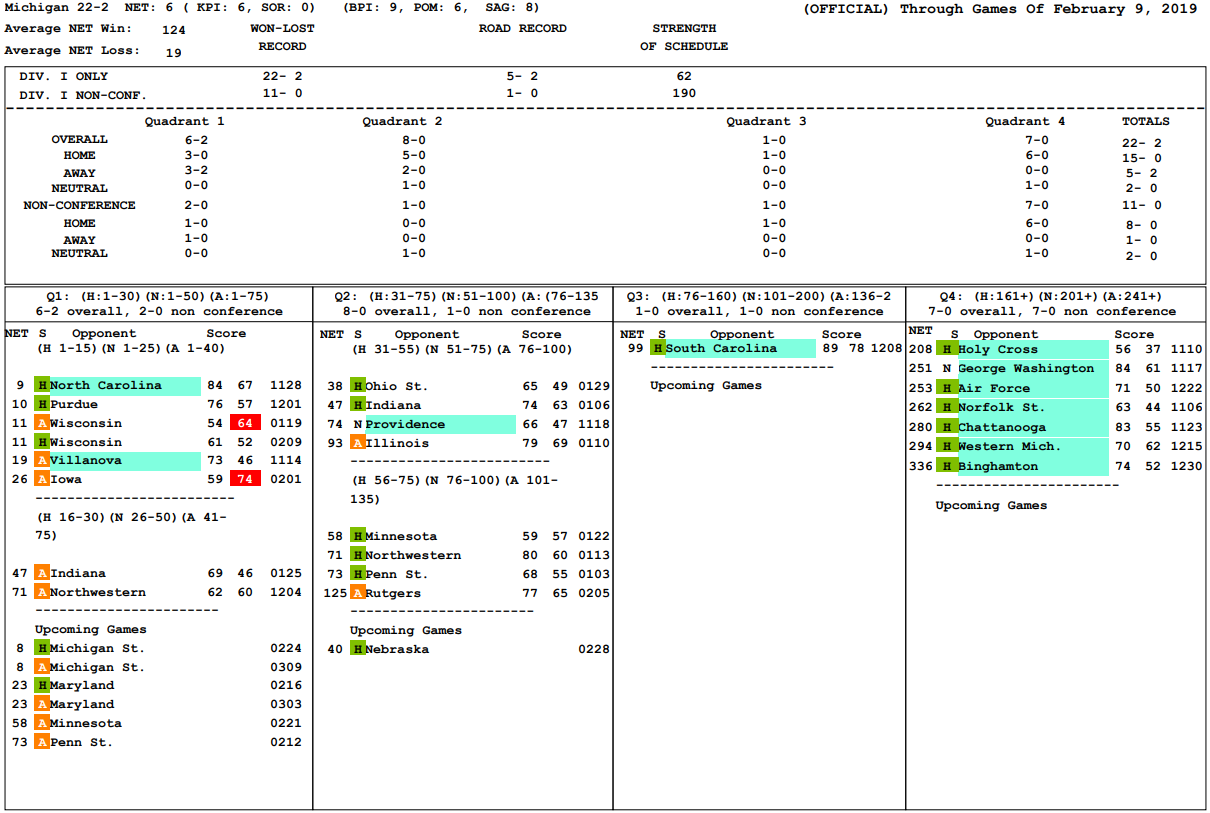 When the committee releases its mock bracket, bracketologists tend to fall in line. That makes perfect sense for a group of people attempting to predict what the committee will do in a few weeks. The bracket reveal serves as a reset heading into the final month of the regular season.

Michigan is nestled into that 2-seed range in almost every bracket and predicted to open the NCAA Tournament in Des Moines or Columbus. In most brackets, the Wolverines are shipped East to Washington DC (and paired with Duke) or West to Anaheim (and paired with Gonzaga).

What’s the most important thing for Michigan fans to take away from Saturday’s bracket reveal?

I don’t know if it’s necessarily the most important thing, but definitely the most surprising thing to me — Michigan was 6th in the overall seeding process. Going into the bracket reveal, I had Michigan at 5th, but said I wouldn’t be too surprised if they came in ahead of Gonzaga and nabbed the fourth 1 seed. Instead, they were one spot in the other direction, behind Kentucky on the 2-line. This is particularly important because it would shift them from a Columbus sub-regional pod to a Des Moines sub-regional pod.

Another more generic takeaway from the reveal – the committee is going to use the NET as a crutch even more than they used RPI when evaluating teams. This doesn’t surprise me too much – the NET is the NCAA’s shiny new toy, so they’re going to feel obligated to rely on it heavily.

Could it be beneficial to be lower on the S-Curve as a 2-seed in order to avoid ending up in Duke’s (presumed East) region?

This question really unveils the most perplexing thing to me in regards to the whole bracket preview process: how willing the committee appears to be when it comes to not having competitive balance throughout the regions.

As part of putting the top 16 teams into 4 regions, the committee is supposed to promote competitive balance by making sure the overall seeding of the top 4 teams in each region sums up to a similar total. According to their seeding procedures, “Generally, no more than five points should separate the lowest and highest total.” In the reveal, the totals were as follows: East – 32, South – 32, Midwest – 34, West – 37. Technically, that falls within the scope of their requirements, but they had an easy improvement opportunity. If they had swapped Michigan and Michigan State, all regions would’ve been within 3 points.

I’m assuming the committee’s theory is that they don’t want to punish a top 2-seed by putting them at such a large geographic disadvantage. However, I think it’s a much greater punishment to keep them close to home but put them in the same region as the #1 overall seed. Nevertheless, if the committee remains consistent with this methodology between now and Selection Sunday, then yes, it would be beneficial to fall a spot or two in true seeding if avoiding Duke is the endgame.

How many Big Ten teams still have a chance to make the NCAA Tournament?

Barring a miraculous Big Ten Tournament championship run, we can safely eliminate Penn State, Northwestern, Rutgers, and Illinois from consideration for the NCAA Tournament. In contrast, we can lock in Michigan, Purdue, Michigan State, Maryland, Wisconsin, and Iowa.

The four remaining teams are the most interesting cases. Ohio State and Minnesota would almost certainly be in if the tournament started today, while Indiana and Nebraska would be right at the precipice of in and out (Ed: but clearly appear to be headed in the wrong direction). The Big Ten legitimately could place as many as 10 teams in the tournament if chaos ensues. However, if I was an oddsmaker in Vegas, I’d set the over/under line for Big Ten teams who hear their names called on Selection Sunday at 8.5.