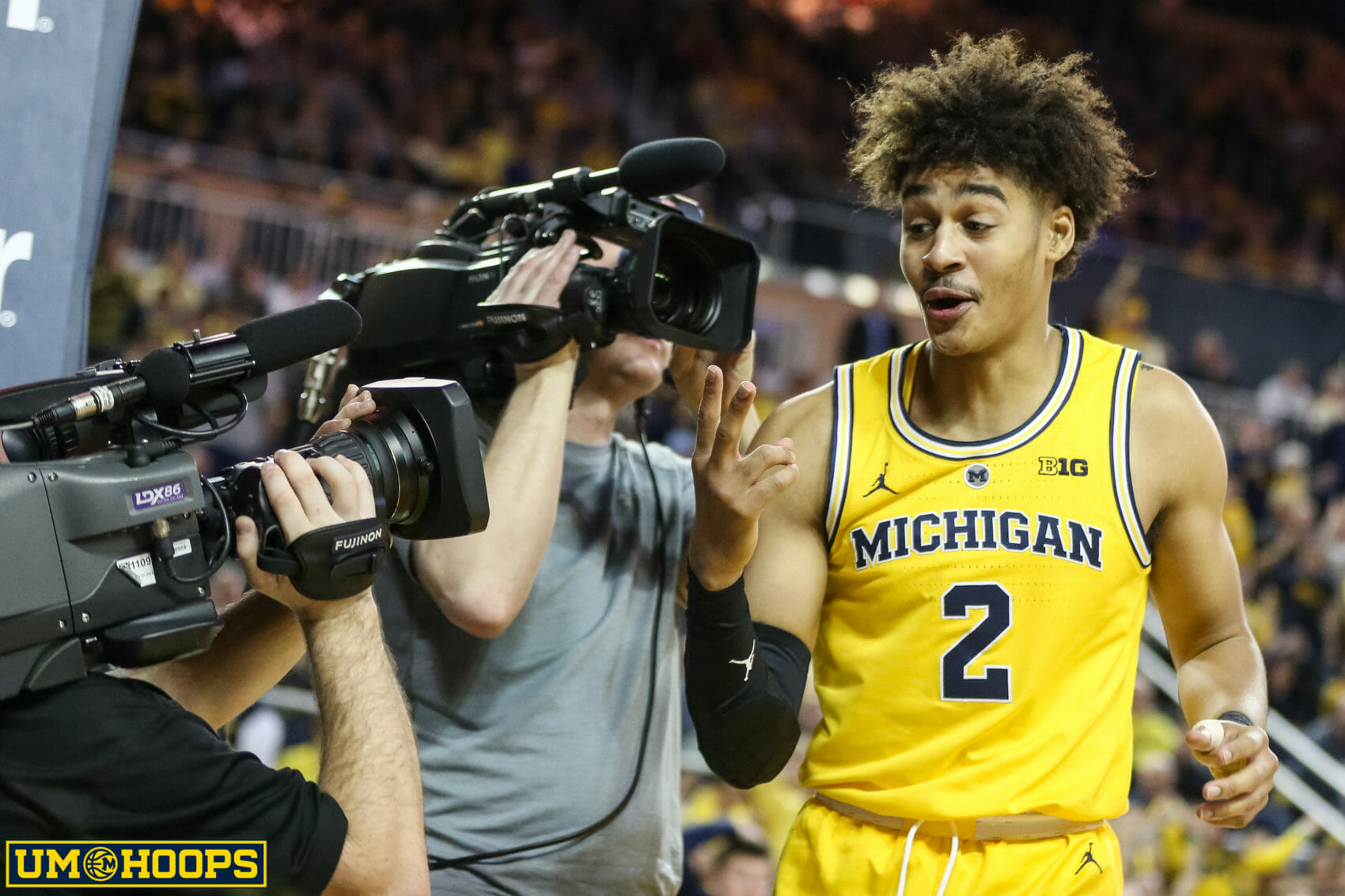 Michigan bounced back from its disappointing home loss against Michigan State with a pair of strong performances last week. The Wolverines thrashed Nebraska at home and then picked up another quadrant one win at Maryland on Sunday afternoon.

The wins went a long way toward cementing Michigan’s postseason seeding potential given their high volume of quality wins (17-4 in quadrant one and two games) and lack of bad losses. The Wolverines have one more chance to add to their resume in the regular season with Saturday’s rematch against Michigan State. 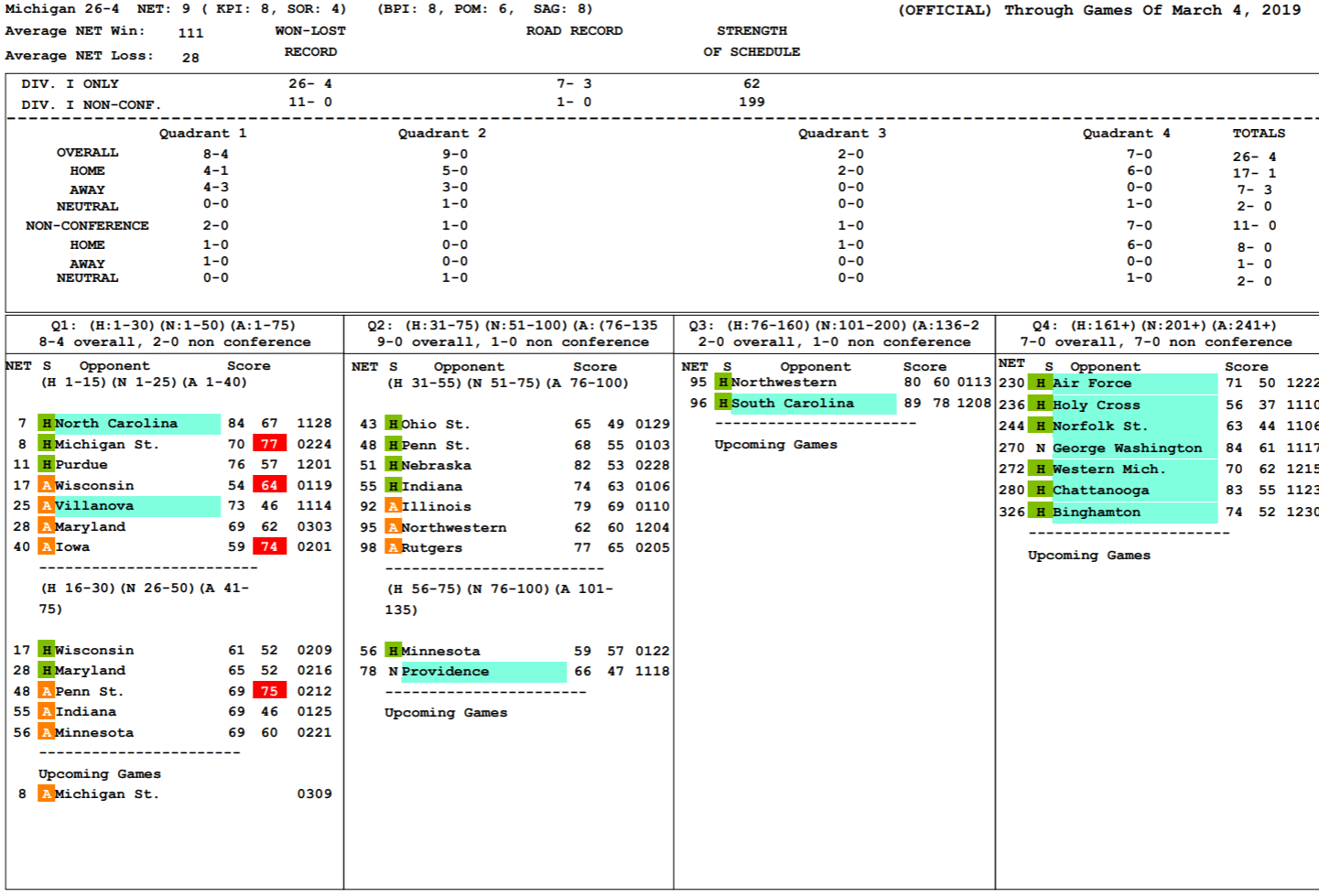 Michigan’s average seed on the bracket matrix is 2.06 and almost every notable bracket projection tags the Wolverines as a No. 2 seed. Most bracketologists also have Michigan opening the NCAA Tournament in Des Moines.

While the Wolverines are comfortably on the two line, it could be hard to reach the one line. Duke, Virginia, and Gonzaga are close to consensus picks as No. 1 seeds. It feels like Michigan would have to win out — including the Big Ten Tournament — to have a chance of hopping Tennessee or Kentucky, especially if one of those two teams wins the SEC Tournament.

Break down Indiana’s bubble situation. How do you weigh the strength of their wins vs. the volume of their losses?

In the past two years, the committee has set the precedent that they’re willing to overlook a mediocre record if you play a tough schedule and score a handful of quality victories. In 2018, Texas got in as a 10-seed with a 19-14 record. In 2017, Vanderbilt (19-15) and Michigan State (19-14) both received 9-seeds. With a NET of 55 and six quadrant 1 victories, Indiana is right in the thick of the bubble discussion, despite a 15-14 record. If they can close the regular season with two more wins (at Illinois, vs. Rutgers) and win two games in the Big Ten tournament to get to 19 wins total, they’ll have a legitimate chance to hear their name called on Selection Sunday.

When trying to sort through seeding, what are the most important criteria? What should Michigan fans like and dislike about their team’s resume?

As much as I view the NET as a vast improvement over the RPI, the introduction of it makes my job as a bracketologist a bit more challenging. Other than the preview reveal, I have no historical basis for judging precisely how they’re going to use it for seeding teams.

If the preview show is an indication of how they’ll seed the entire field, the committee is going to lean heavily on a team’s NET ranking. There are three major factors outside of NET ranking that I anticipate will likely cause minor seeding and team inclusion adjustments by the committee: overall strength of schedule, neutral/road record, and quadrant 1 record.

The switch to the NET actually modestly helps Michigan’s seeding outlook, as they are 9th in the current NET rankings, whereas they are 11th in RPI. Furthermore, the Wolverines have a solid (9-3) neutral/road record, and no bad losses (18-0 vs. quadrant 2-4 opponents). The lone weakness on Michigan’s team sheet right now is that their non-conference SOS was abysmal (199th).

What impact do you think expanded conference schedules will have on the selection process? When I see things like NC-SOS on the team sheets, I wonder if that could harm Big Ten teams despite the overall SOS boost from extra league games.

Conference record is not included on a team sheet, so the impact is implicit, not explicit. The committee is supposed to consider imbalanced conference scheduling to a certain extent, but I think any impact from that will end up being negligible.

Obviously I haven’t been in the room with the selection committee, but from what I can surmise, overall SOS is more important than non-conference SOS. Accordingly, following up on my answer to the second question, Michigan’s weak NC-SOS is being finicky – their overall SOS (62nd) isn’t great, but much better.