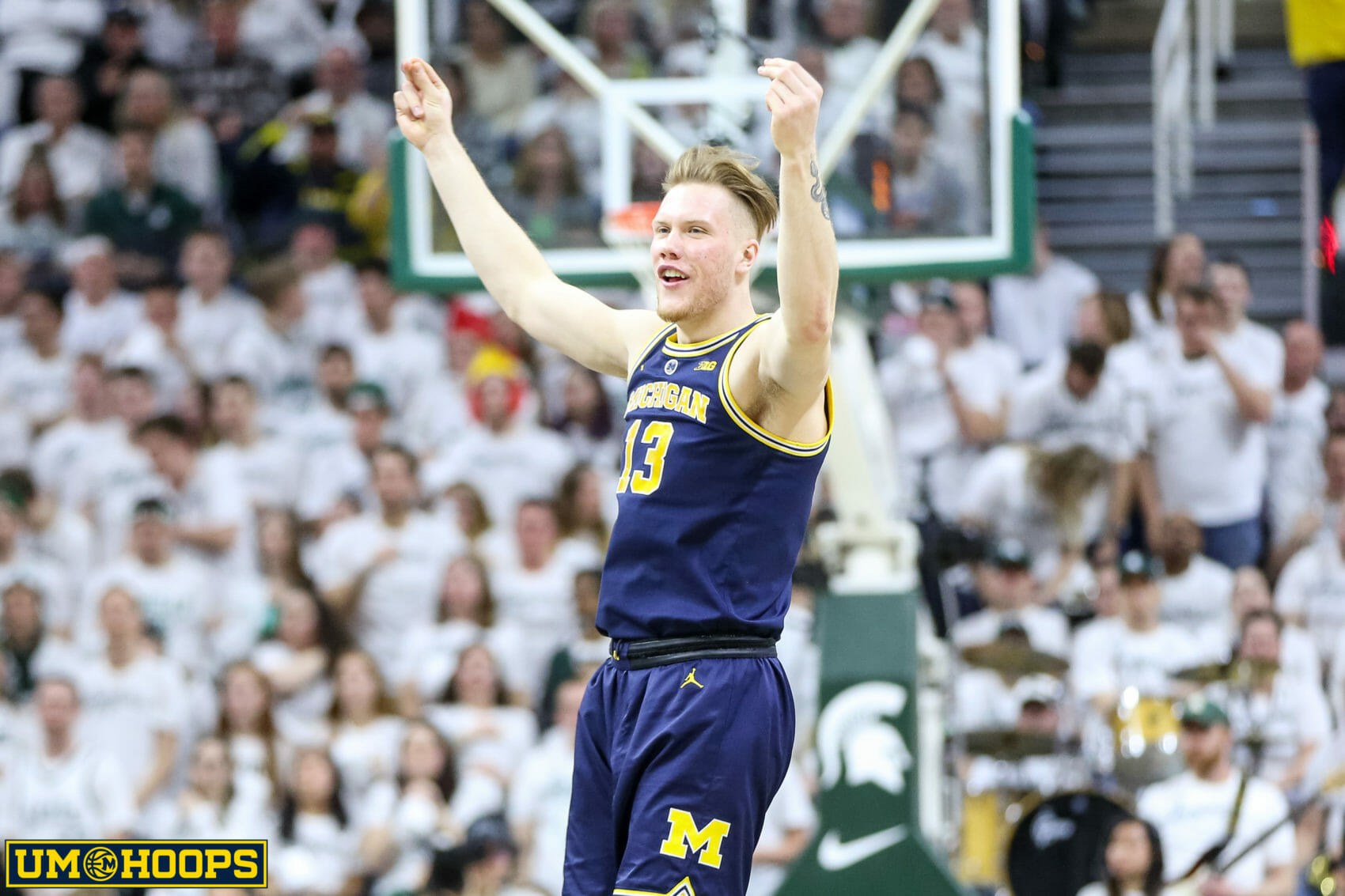 After dropping its second game to Michigan State this season and losing out on a share of the Big Ten Championship, Michigan’s attention will shift to the Big Ten Tournament and NCAA Tournament seeding.

The Wolverines had been at least a 2-seed in almost every bracket projection posted over the last month, but now are looking at the real possibility of opening the NCAA Tournament as a 3-seed — potentially even in a region with Kentucky and Duke.

Michigan still has plenty of opportunities to improve its resume. There’s a very good chance that every game the Wolverines play in Chicago is a quadrant 1 game, which means that each victory will have a tangible impact on Michigan’s seeding. 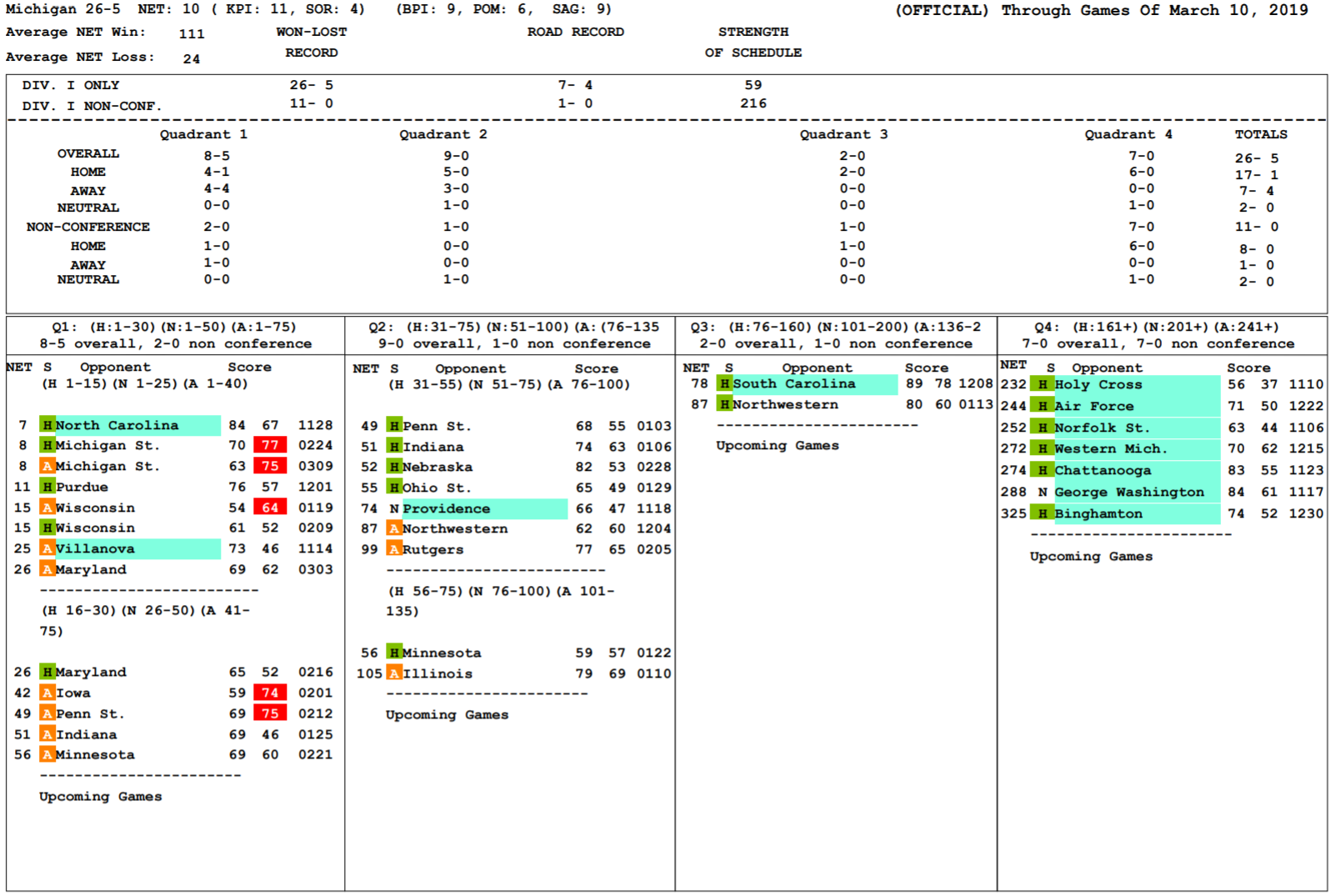 Most brackets updated over the past 24 to 48 hours have Michigan pegged as a 3-seed.

The Wolverines are still the last No. 2 seed in the Bracket Matrix with an average seed of 2.25 but teams like LSU and Texas Tech appear to be nipping on their heels.

1. What’s the seeding scenario for Michigan heading into the Big Ten Tournament? What does Michigan need to do to earn a 2 seed?

Right now, I think Michigan could be anywhere between 7 and 10 on the committee’s true seed line; I have them at 9, but I’d hear an argument for anything in that range. The margins between those spots are razor thin right now, so what Michigan has to do to earn a 2 seed is relative to how the teams around them in true seeding perform.

Accordingly, Michigan probably needs to perform as well as or better than three of the following four teams during conference tournaments if they want to snag a 2 seed: Tennessee, LSU, Houston, and Texas Tech. One might even be able to throw Purdue in that group as well, which really puts an emphasis on the potential semifinal matchup that would be looming for the Wolverines.

If someone wants some speculation exclusive to the Wolverines, regardless of what other teams do, my wager is that two wins will get them a two seed. In an earlier edition of bracket watch, I suggested that a 2-1 finish for the Wolverines would net them a 2 seed. They pulled that off, but LSU’s resume during that time improved in a manner I did not expect.

2. Is the strength (and depth) of the Big Ten being undervalued? Every Big Ten team is ranked 105th or better in the NET.

I think it is a little bit. I fear that the committee, being human, might succumb to recency bias and under-seed the Big Ten teams based on them beating each other up in conference play. Doing this would involve forgetting the impressive display the Big Ten put on during November and December. If the committee truly wants to adhere to their selection bylaws, they need to make sure they consciously give even weight to November games and February games.

3. How is Gonzaga a lock for a 1 seed despite so few quality wins?

The movement to NET definitely helps the Zags. They’re 5th in the RPI, but 1st in the NET, and my wager is that is because of the efficiency portion of the NET calculation. The NET is going to allow for teams with slightly weaker SOS (see Wofford and Buffalo as other examples) to get seeded higher than they otherwise would under RPI because of efficiency adjustments.

On top of that, Gonzaga’s overall NET SOS is respectable (52nd), their only losses have come to UNC and Tennessee, and they are the lone team to beat a full-strength Duke.

4. What is the impact of injuries on seeding? It feels at times that the application of this logic is applied unevenly. How does a situation like Zion Williamson compare to Michigan without Charles Matthews or Michigan State without Nick Ward?

In all my time as a bracketologist, this is probably the biggest conundrum. It feels that the application of this logic is applied unevenly because it is applied unevenly. Until the committee comes up with a quantitative way (that they trust and believe in) to measure the impact an injury has on a team, it’ll all be qualitative opinion, subject to all sorts of biases.

In theory, the committee is supposed to be seeding each team based on how they performed during the season with the roster that they anticipate having available for the tournament. Unfortunately, this encourages information asymmetry – all teams are incentivized to positively exaggerate the health status of any key player whose potential absence could negatively affect their seeding.