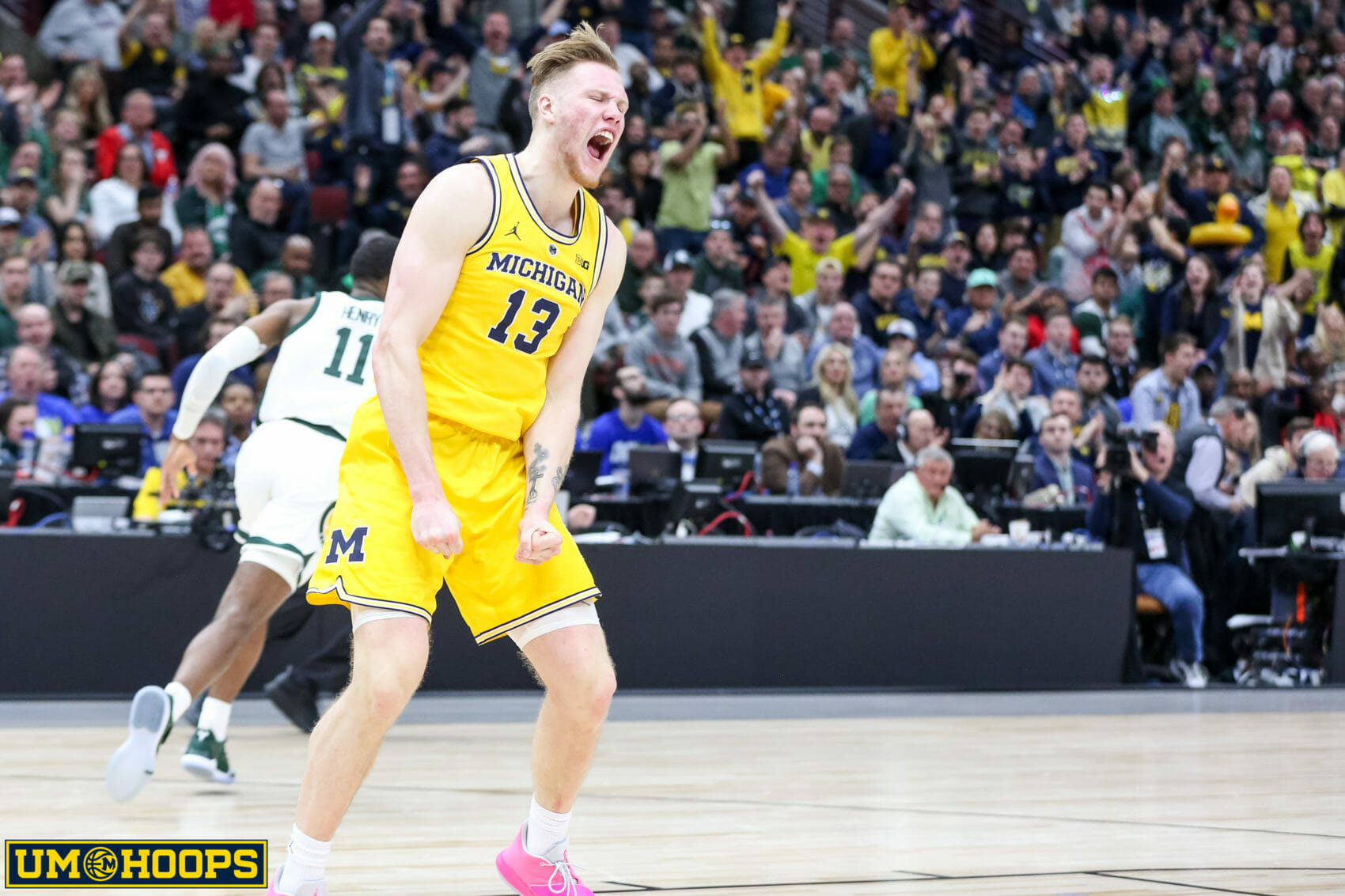 Michigan’s Big Ten Tournament ending was sour but it still earned a No. 2 seed in the NCAA Tournament and a first-round game versus Montana.

KenPom’s predicted score for Michigan’s first-round matchup is Michigan 74, Montana 57. The betting spread opened at Michigan -15.5 and has already moved to Michigan -16. 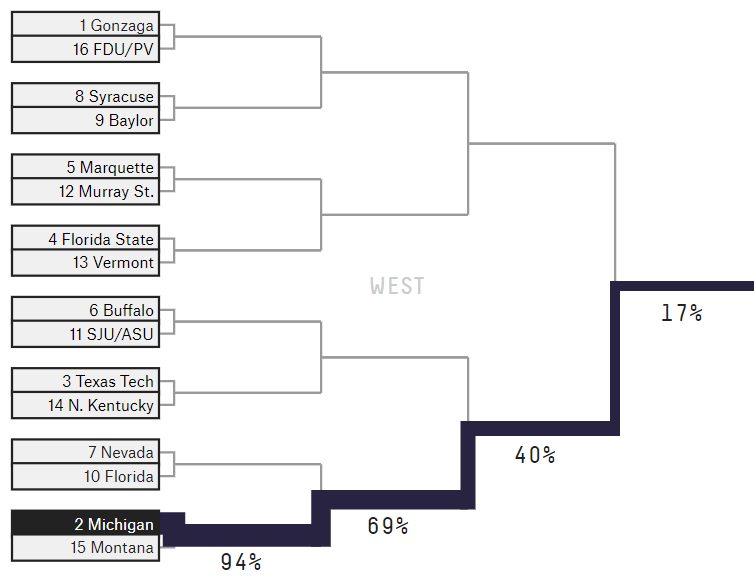 Here’s a similar analysis from KenPom for top contenders across the bracket.

78.2% of ESPN submissions have Michigan advancing to at least the Sweet 16 while an impressive 26.2% have the Wolverines in the Final Four. Jay Bilas picked Michigan to make the Final Four.

CBS ranked Michigan 9th in a re-rank of the entire field of 68:

The Wolverines have had a great season, which started 17-0 and featured mainstream wins over Villanova, North Carolina and Purdue. It’s still a top-level team. It can get to yet another Final Four. Iggy Brazdeikis is a long-distance-shooting freshman who’s one of the best newcomers in the sport. And the fact that a 5-foot-10 guard, Zavier Simpson, has developed a reliable hook shot is one of the coolest things in college basketball.

The Wolverines just have too many players that are liabilities offensively. Zavier Simpson does not have to be guarded all that tightly. Jon Teske has his moments, but he goes through stretches where he isn’t really a threat. Charles Matthews was really good last year in the NCAA tournament, but that came at a time when he was playing the four in a lineup that featured knockdown jump-shooters at three spots on the floor, including at the five.

That spacing isn’t there this year, and that is why the Wolverines can see their offense get bogged down for long stretches. If that happens in the NCAA tournament against someone like Texas Tech, they could be in real trouble.

WHEN THEY’LL LOSE: Texas Tech is a dangerous team for Michigan to draw in the Sweet 16.

Mark Titus says Nevada is the “team that everyone will think is good but actually kind of sucks” in the West:

If Nevada hadn’t reached the Sweet 16 a season ago—which, as a reminder, required an overtime win against Texas in the first round and a ridiculous 22-point comeback in 11 minutes against Cincinnati in the second round—nobody would give any thought to the Pack’s chances this year. But because they had a ton of hype entering the season (no. 7 in the preseason AP poll!) and went on to win 29 games, a bunch of suckers are going to pick Nevada as their dark horse to come out of the West. Those suckers are going to be severely disappointed when Michigan wipes the floor with the Pack in the second round (assuming Nevada can even get past Florida in the first round).

Seth Davis likes Texas Tech to knock off Michigan in the Sweet 16:

I thought long and hard about picking Buffalo to reach the Elite Eight. Remember, this team starts three seniors and returned four starters from the squad that blitzed Arizona in the first round last year. I’m a big believer in teams that have NCAA Tournament experience. That said, I am pumping Texas Tech hard in this region, all the way to the Elite Eight. That most likely would mean knocking off Michigan in the Sweet 16. The Red Raiders are one of the few teams in the country that defend as hard and efficiently as the Wolverines, and despite their disappointing loss to West Virginia in the Big 12 tournament, they have played extremely well on offense the last month. I say ride the hot hand.

No experts at CBS picked Michigan to advanced to the Final Four. CBS Sports’ Chip Patterson pegs the Wolverines for an early exit:

Team that will make a far-too-early exit

Michigan: At the start of February, I had the Wolverines as one of four teams I thought could win a national title, but the offense was far too inconsistent down the stretch to think we’re about to see another deep run from John Beilein’s team. I think the draw is really tough with Nevada, Florida and Texas Tech all in the potential path to an Elite Eight showdown against Gonzaga, and would pick any of those three teams against the Wolverines on a neutral floor right now.

Mike DeCourcy likes Nevada as a Cinderella in the West:

West Region: No. 7 Nevada. It was rather surprising to see this once-fearsome offense limited to just 56 points and 6-of-24 3-point shooting by a San Diego State defense the Wolf Pack punished for 81 points just a week earlier. We saw what they were capable of in their comebacks against Texas and Cincinnati in last year’s tournament. They still could shoot their way into prominence, though one wonders if Caleb and Cody Martin and Jordan Caroline — all averaging 32 minutes or more — might be a bit out of gas. Perhaps losing in the Mountain West semis gave them the break they need.

Welcome March sight: That would be Michigan’s balletic offense, as John Beilein has strung together another remarkable season for Big Blue. The unique wrinkle to this edition of Michigan under Beilein is that the Wolverines’ defense is better than their offense. They are ranked No. 2 in KenPom in defense and No 18 on offense. Don’t be surprised if last year’s national runner-up has another deep run in them. Beilein is the best active coach to not win a national title. As a bonus, they don’t have to play Michigan State. Tom Izzo has beaten Beilein three times this year.