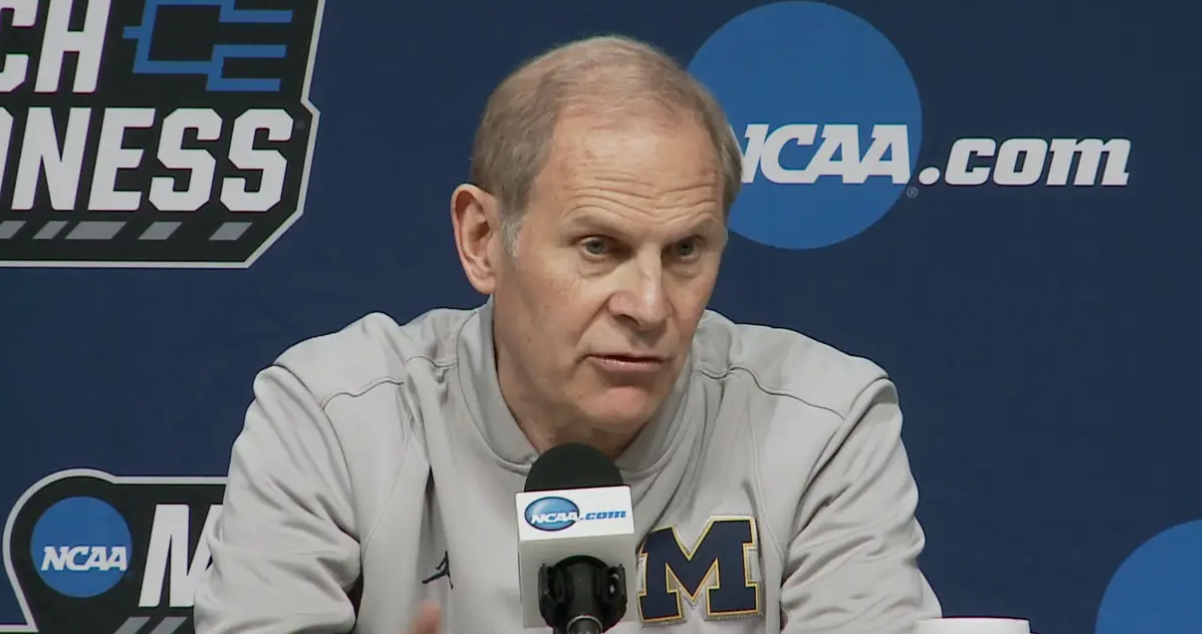 John Beilein, Isaiah Livers and Jordan Poole were on the podium today to preview Michigan’s second-round game versus Florida.

Q. Isaiah, Coach talked yesterday about how you stepped up the last few games or so. Has there been a change in your game or you’re just taking what you see?
ISAIAH LIVERS: Nothing really different, Coach B. just really believes in what I can do and the confidence I have to have when I’m out there playing for my guys and for myself and for the coaching staff. They believe in a lot of things I do and I just gotta go out there and play aggressive.

Q. Defensively Florida has mentioned that they are wanting to try and throw a lot of different looks at everyone here this week. They did so against Nevada a couple times, especially down the stretch. What do you guys know about the overall defensive challenge they provide?
ISAIAH LIVERS: The defensive challenge they bring to the table is they change defense. They can go from a man-to-man, 1-2-2 press. They have a lot of different looks that they can do, so that’s different for us.

JORDAN POOLE: Yeah, they have a lot of different defensive schemes being able to go against a defense team like that we need to be locked in on our offensive flows and our offensive sets, being able to have X at the top in the point guard position and being able to call those out and identifying them early should really help us.

Q. I know we came back last week, but what does it do for the whole team with Charles being involved in the offense again like he was last night?
JORDAN POOLE: Being able to have Charles back brings a different dynamic to the team, having a leader and a guy who has been able to provide so much on the offensive and defensive end, being able to have him on the court gives us a different type of feel and aggressiveness. Being able to have the performance he did yesterday shows what we’re capable of.

ISAIAH LIVERS: It’s harder for teams to scout when you have an extra weapon on the floor like Charles and what he brings to the table. Jordan was talking about his leadership and another voice out there talking is helpful for young guys like Iggy or us two because having another leader who has been through it already.

Q. You guys have been through this process before. What are the couple most important things about this in-between day when you have short turnarounds? You’ve got to focus on the next opponent coming and you’ve got to rest and you’ve got to mix all those things together. What’s the most, whether it’s physical or mental frame of mind? What’s the important thing about a day like today?
JORDAN POOLE: I personally believe it’s rest, only because you’re coming off scouting a team for an entire week or not even an entire week, just trying to figure out you know who you have to play and this in-between day gives us time to rest our bodies physically. But mentally we have to be locked in and prepared to go against an entirely new challenge, so the dynamic of mental and physical. I feel like rest is the key, but you can’t mentally rest because there is so much you have to do in order to face a new team.

ISAIAH LIVERS: I agree with Jordan, a lot of mental preparation between that one day. You change from one team to another who does something totally different than the team before did. You’ve got to shift your mind and also your body because you just played the day before so that’s also key.

Q. For both players, the Florida coach and players talked about how your size is going to be a problem with them bringing a smaller lineup and small ball approach. Is that going to present a problem for you guys?
JORDAN POOLE: I feel like our preparation for Montana really helped us. I think that a 6’5″ man yesterday, Jon did a really good job on him yesterday and having guys who are able to play different positions, I feel like is a strength of ours. So even if they do go small ball lineup we are able to switch-up our personnel and have different dynamics in order to guard them.

ISAIAH LIVERS: I have a lot of confidence in Jon Teske guarding them because that guy can go 1 through 5 without a problem. He did it yesterday. I think he will be just fine.

Q. Both Coach Beilein and Coach Izzo talked about how the short turnaround was taxing from Sunday to Thursday. Did you guys feel that?
JORDAN POOLE: Me personally, I remember last year after the Big Ten tournament we had a week after and we had to come and prepare for March Madness and being able to go with the momentum and go while you’re ahead and continuing to have positive energy throughout the week I feel like is a strength of ours and being able to stay locked in and not have too much downtime or too much out time is helping us.

ISAIAH LIVERS: I also agree. I like the short turnaround. Like he said, stay locked in. You don’t got to shake any rust off and wait a whole week like we did last year playing against Montana. I just agree with Jordan.

THE MODERATOR: Thank you, gentlemen.

JOHN BEILEIN: I wish last night I had congratulated Montana on their season. Being a mid-major coach for so long, it’s hard to get to that point. We just had one of our better defensive games of the year.

We have great challenge and opportunity right now with Florida. They’ve got a great mixture of some really good talent but some seniors who have had really great careers there. They’ve had a lot of success in the postseason, and they had a great win yesterday over a Reno team that was in the top-10 earlier in the year. Really have a great coaching staff, one of my former players, Darris Nichols, is on their staff, and I’m probably as close to him as I am any of my former players, and I have a lot of them. Darris is one of my former guys. I’m sure it’s going to be a great game. The Florida people have done a great job and are running a great program.

Q. Coach, a lot has been said about Iggy throughout the year. In addition to his precociousness as a freshman. He seems to play his best when his stakes are the biggest. Does he get enough credit for that?
JOHN BEILEIN: I was asked that same question, another Lithuanian from Toronto, was Nik Stauskas. Nik came in to the big stage and he loved to play the game and it was a bit of a stage for him. Iggy has that. He will not be doing this to any players tonight. He usually does it sometimes to the crowd. He made a mistake there, but he is a really good kid who looks at me every day and says, he really loves this part. He loves college basketball. He really loves being part of Michigan.

Q. In terms of setting up an offensive approach for this game, what’s the biggest challenge of a team like Florida that really wants to throw a whole bunch of different looks at you? Coach White mentioned that specifically throughout the week and he showed it during crunch time in the Nevada game.
JOHN BEILEIN: That is the challenge. You just said it. Sometimes they change defenses in the middle of a defense. They throw the ball in and they are in zone and they may change it in the middle of it. You have to play with heads up. The shot clock is ticking and last night we couldn’t run a lot of stuff because they were pushing us down and icing us the whole game. We have to adjust, but they’re going to try to keep up off balance. If they saw the way we attacked the press yesterday they’ll probably press the heck out of us and we’ve got to be ready for a whole lot of things in that we do see that occasionally in our league, but it’s still always needed with new players.

Q. I asked you yesterday about Charles and his development back and you said when you play the 1-2-3 you don’t have a lot of time to evaluate what he needs to do to improve as he recuperates. But then you said if you had that period of a day or two days you could figure a better strategy out. Now that you have this one day, what did you think that Charles can still do as he gets from that 90% level to probably something closer to 100?
JOHN BEILEIN: I think he will be more comfortable today with the different things because we were trying to pace him to get ready. It’s just a comfort level right now. If we’re fortunate enough to win this game then we can get more specific because we were just getting back to square one a little bit about, all right, putting him back in a ball screen, back doing some things that he’s done well at times this year. He’s getting more and more comfortable every time he gets out there and we really need him on the floor for his defense and all the intangibles he brings to us. But as you saw yesterday he’s a really important part of our offense.

Q. Coach, you talked about getting Charles involved and Iggy is a stalwart in the offense, but is it a point of emphasis to get Jordan more involved?
JOHN BEILEIN: All those guys, we look at the match-ups and who is guarding them and what we’ve seen from that. It’s tough to dial up four guys, right? It’s really tough to do that. A lot of people play through one, two or three players, but everyone else gets residual affect. Jordan is one of the guys we will choose at times and it depends on the match-up or what style of play they have.

Q. John, you and Izzo have had similar success in recent years. You’re both going for win 30 this season tomorrow in a conference that hasn’t lost a game in this tournament yet. Can you talk about different coaching styles and different ways to get to the same end and any reaction you had to what happened yesterday with Michigan State and Tom?
JOHN BEILEIN: No, I think that Tom’s record speaks for itself, how really good they’ve been. We talk about this the whole time in our great state of Michigan. We have two elite programs within the state. If you look at the especially the last decade the number of Final Fours, the number of conference championships that we have had in combination, Duke and North Carolina are the only ones that are even close, and the rivalry that we have. We both are very are different. I don’t know enough about what he does in practice or whatever. I’ve never been an assistant of his or gone to a practice, obviously. So I don’t know how our styles contrast. I do know our style and it works. His certainly does, too.