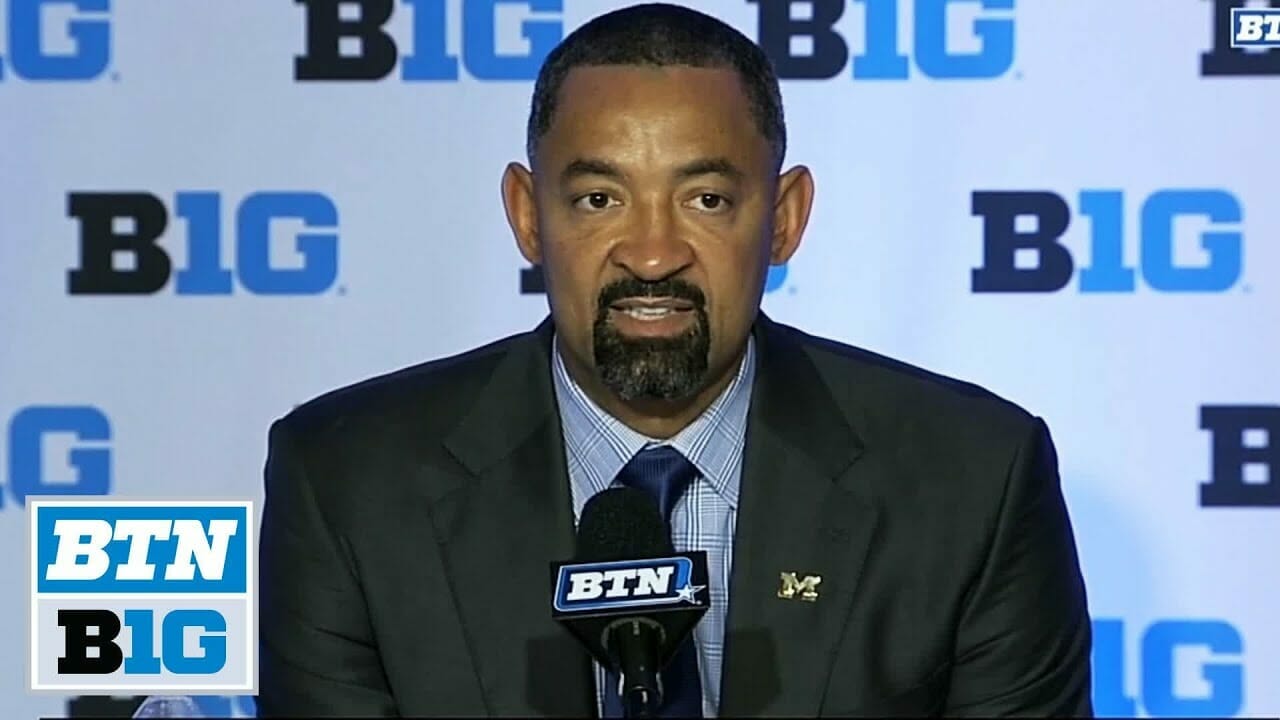 JUWAN HOWARD: Good morning, everyone. Well, I’m the rookie. I’m excited about this opportunity to be here today, my first Big Ten Media Days. I’m sure there’s some people here out here in this audience that I will get a chance to meet and develop a relationship with. I’m looking forward to that. But let me get right to it. I’m excited about this opportunity. This is a dream come true for me to have a chance to come back to my alma mater, University of Michigan, one of the most prestigious universities there is in this country. Michigan is a beautiful place that helped me develop, become a student-athlete. I got my degree at the University of Michigan, and I’m proud to call myself a Michigan man. Now I get an opportunity to coach at the University of Michigan and help develop some of the best world-class athletes to become a student-athlete, to play at a high level, to represent an amazing university.

Q. I’m sure you’ve followed Michigan from afar over the years, but now that you’ve been around the team, now that you’ve seen them in the gym, what’s surprised you the most about this team?

JUWAN HOWARD: Well, I’ve had a chance to watch them from afar. Being an assistant coach (with the) Miami Heat organization — and a chance to see a guy like a Zavier Simpson who I’ve watched for many years, how he’s developed as a player, now having an opportunity to coach him, I see why he’s been so special, because he’s a great person, an excellent leader, and a hard worker. But then the list falls after Zavier. A guy like Jon Teske, another person who has improved a lot as a player. My goal is to help him get better as a player. Isaiah Livers, who’s developing day by day, high-character guys that are on our team. It’s a dream for a coach to have those guys in the trenches with you.

Q. As a graduate of Chicago Vocational and Chicago Public League, how important is it going to be for you to recruit to the city and the CPS, and will Chicago be an essential part of your recruiting strategy with the program going forward?

JUWAN HOWARD: Well, my walk has been special. Growing up here in Chicago, this city, as we’re here today, being a part of the public league was not only easy for me, but it was challenging at times. So I wouldn’t think because I had so much success that it was an easy route. It was not like that. I had to face a lot of adversity that helped me develop as a young man. Been through a lot of wars with King and Simeon High School that taught me to compete at a high level. Chicago has amazing talent in this city, and I will continue to recruit, not only here in Chicago but in other parts of the country.

Q. Been around long enough to remember when you played, obviously, there at the University of Michigan. I’m curious as you made the transition from NBA player to the staff with the Miami Heat, when did it dawn on you that you wanted to coach and eventually you wanted to be a head coach? When did those ideas start to really foment in your mind to where you’re in this position today?

JUWAN HOWARD: Well, it started early on when I was playing, my latter years of my career. Like I would say back when I was playing for Portland before I signed with the Miami Heat in 2009 as a player under Nate McMillan, that was the time when I had conversations with Nate and Monty Williams asking them questions about what it takes to be a coach, what it’s like coaching in the NBA. I started to put my brain around, you know what, before I was more interested in like the front office, but that bug, that coaching bug, that teaching bug became like what I wanted to do for my next walk. Signing with the Miami Heat, getting to know the Heat culture, working under Erik Spoelstra, David Fizdale, Dan Craig, those guys were teaching me how to prepare myself as a head coach. As I was an assistant with the Heat, those were the moments where I was preparing myself, like you know what, this is me, I’m embracing this opportunity. I started preparing myself as a head coach. Erik Spoelstra started teaching me how and what to look for, how to prepare for it as a coach, how to prepare the game planning for opponents. All that information and data I started collecting, and that was helping me prepare for this day moving forward.

Q. Curious to know your thoughts on the recent California law that was passed where players are able to profit off their name and likenesses. As a former player, now a coach, a feel like a lot of coaches are kind of straddling the line on where they stand. Where do you stand?

JUWAN HOWARD: Well, I don’t know too much about it, to be honest with you. I’ve heard a little bit of some information that’s out there. I haven’t had a chance to really read about it. I’ve been more focused on our players, on practices, getting ready for the season, dayto-day stuff that I’m dealing with back at the University of Michigan, whether it’s players’ academics, practices, planning, recruiting. But I’ve heard a little bit about it, and unfortunately I haven’t read anything on it, so I can’t really comment. If it’s something I don’t know about, I would prefer not to comment about it.

Q. What are the challenges taking over a program that John Beilein obviously put in a really good position?

JUWAN HOWARD: Coach Beilein did an awesome job for this program. I don’t know if you know the story or not, but when I was working for the Miami Heat — and I told you before earlier that I was preparing myself for a head coach for some day getting ready for if I ever had a chance to be a head coach, whether it was in the NBA or college, what — and how I would want my team and how I would want my team to look. So every summer I used to go and visit Coach Beilein. He would pick my brain on defense, on post defense. There were times when we would have a session — I call it a career workshop day — where he would have his staff, coaching staff out there, and we all would talk about basketball and developing and skill development from an offensive standpoint. I’ve always had a lot of respect for Coach Beilein and his philosophy. There were times I would ask Erik Spoelstra to reach out to Coach Beilein because I would say, hey, this guy is interesting. He’s one of the best basketball minds out there. For now he takes his staff and makes a huge jump to the NBA and becomes the Cleveland Cavaliers’ coach. Now, I’m sure a lot of people think, you have a lot of pressure on you to try to fill those shoes. All I can say is this: I’m not going to try to be like Coach Beilein. He has his philosophy, his way of doing things. I have my philosophy, and I feel that works for our team moving forward. But I do respect the gentleman who was there before me.

JUWAN HOWARD: His name is the Godfather. I think hiring Coach Martelli, to let you know this, that, A, I’m humbled; B, that I respect guys who have been head coaches and have a ton of experience. I would be a fool not to sit there and pick Coach’s brain or use him. He’s on the staff. He’s a guy that I’m going to lean on a lot. I think he has so much experience. 24 years as a head coach, 34 years total, that says a lot. That he knows a lot about college basketball, and that’s why — and I’m very fortunate that I was able to get this Christmas gift early by hiring Coach Phil Martelli.

Q. Do you have to explain to your players and the guys that you’re recruiting who the Fab Five is and what your relationship is with Chris Webber, or do they know?

JUWAN HOWARD: You know what, that’s a very good question. I haven’t had a chance to even talk about the Fab Five. I think a lot of our guys do their homework. They’re very smart. They know what the Fab Five is. They understand what I’ve done at my collegiate level. They’ve seen — I think the majority of them have seen the Fab Five documentary. Chris Webber in my opinion is a Hall of Famer, not only on the collegiate level but also on the NBA level. Keep in mind, I recruited Chris Webber to come to the University of Michigan, and at that time people said, hey, how can two guys that play the same position coexist on the floor? But we had an amazing coach like Steve Fisher who figured it out, and we’ve had a lot of success and learned a lot from Coach Fisher. But Chris is a Michigan man.