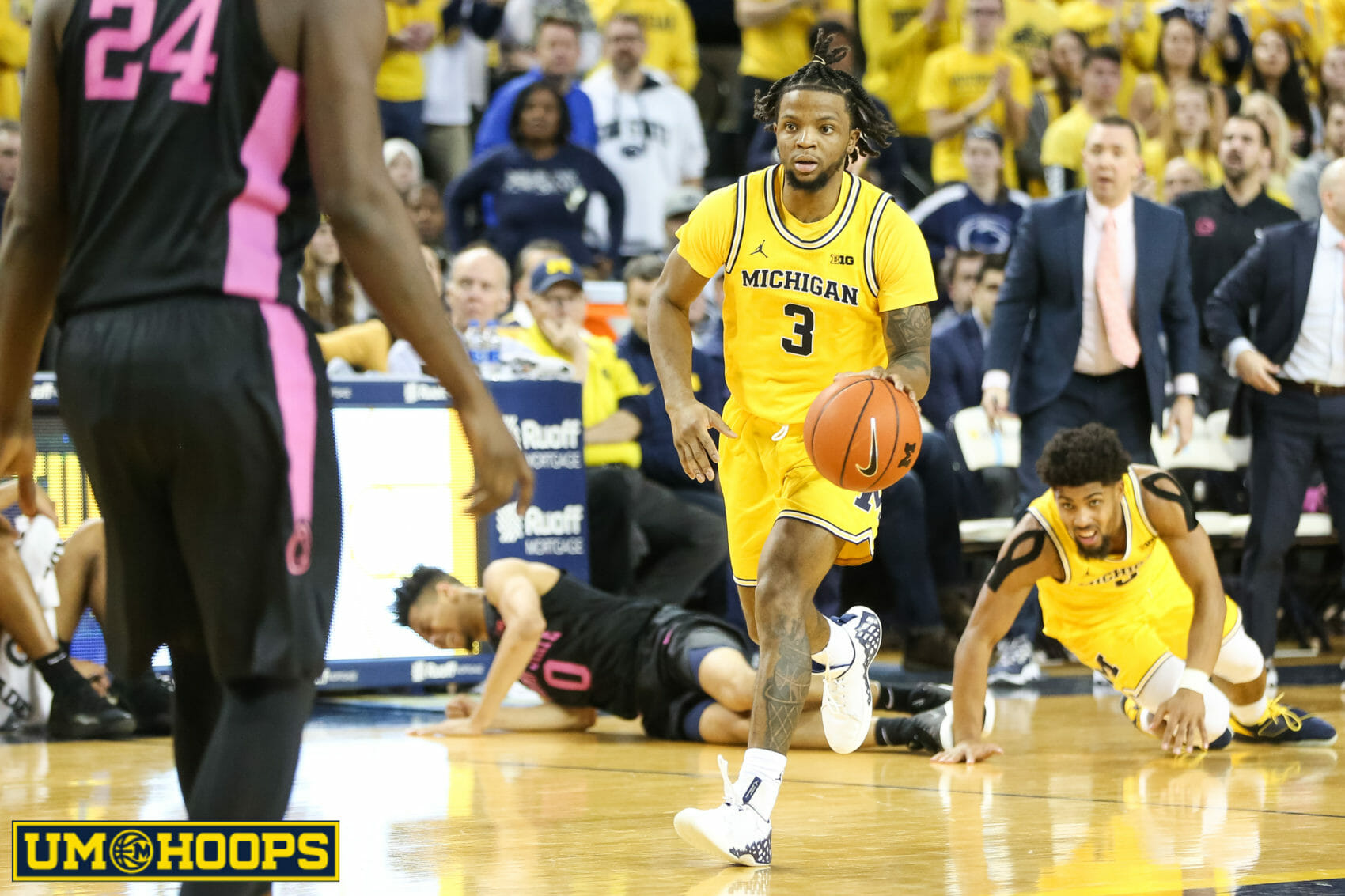 It was just four hours prior to Michigan’s departure to New York City for the game against Rutgers. Juwan Howard sat atop the podium in Crisler Center, eating sliced peaches out of a plastic fruit cup, and largely deflected questions about the two biggest stories of Michigan’s season — Isaiah Livers’ injury and Zavier Simpson’s suspension.

Howard repeatedly neglected to say whether Simpson would travel with the team. He missed Michigan’s win over Nebraska for an undisclosed violation of team rules, one which very much remained undisclosed on Friday.

UPDATE: Simpson has been reinstated and will play on Saturday.

So you’re still looking into what caused it?

When prompted, a few minutes later, that any such evaluation would need to take place promptly, Howard did not tip his hand.

“Still evaluating the situation,” he said, wearing a thin smirk.

Sophomore guard David DeJulius revealed that Simpson, while watching on television back at home, made a FaceTime call to the team at halftime of Thursday’s game. He called in and Howard let him speak about what he saw. He greeted them upon their return from Lincoln and practiced with the team this week. There are no indications from his teammates that whatever misstep Simpson made caused any doubt in his ability to lead — if anything, just the opposite.

“He’s one of our leaders, so he’s always going to be there for us,” said senior center Jon Teske. “At halftime, he was telling us what we need to do better, what he saw on TV. Coach Howard let him speak. When we got back, he was right here at the PDC waiting for us. That’s just who he is, him being a leader, helping out the team however he can.”

It’s one thing, though, for Simpson to miss a game against the worst team in the Big Ten, according to KenPom. It would be quite another to miss a neutral site game against Rutgers, one which will have major ramifications for the Wolverines’ postseason resume. KenPom gives Michigan a 49 percent chance; that, of course, does not account for a Simpson-less team.

“He’s been very respectful and mature through the process, extremely patient, knows that there are team rules that you’ve got to abide by — he understands that clearly,” Howard said. “That’s why I say he’s mature handling the situation, because, yes, he’s extremely disappointed by his actions. He owns his actions. That’s the beauty part of it.  He can take ownership of it. At the end of the day, we all will learn from this process.”

There was little definitively offered about the injury and potential return for junior forward Isaiah Livers, who left the game against Illinois last Saturday with an injury to the hip area.

Howard did not say when Livers — who has missed seven of the team’s last eight games — might see the court again.

“I’m not a doctor,” Howard said. “I don’t get paid for it. I am a former basketball player. When I studied here at the University of Michigan, I did not study any physics or anything to deal with the medical. All this stuff, it’s new stuff with me. Fortunately, I had a great, healthy career. I’m really dumbfounded when it comes to injuries.”

Howard called the situation “day to day” after the Illinois game.

Sophomore guard David DeJulius said Livers has been practicing but didn’t know of any potential timetable.

“Isaiah’s been doing a little here and there,” DeJulius said. “Yeah, he has (been practicing). But Coach is just kind of making sure that when he’s ready to come back, he’ll be ready. He’s diligent about his treatment with the trainers and stuff like that.”

Teske is cognizant, beyond the impact on the court, of what Livers might be going through off of it. During his first injury sting, Livers went to Howard and opened up about his struggles. This time, Teske says, Livers remains in good spirits as he fights to get back.

“Any time we’re outside basketball, I’ll just ask how he’s doing,” Teske said. “He’s always in a good mood, so that’s always good to see. He’s always got a smile on his face. Even though he’s not out there practicing with us, he’s always out there coaching us.”

Between Livers and Simpson — 223 career games played and 807 points scored combined — Michigan remains in limbo as they enter the heart of conference play. The team heads to Madison Square Garden in need of a win to right the ship in arguably the strongest conference in the country.

Each of the next three games rests between 47 percent and 53 percent win probability on KenPom. It’s hardly hyperbole to say the result of those three could mark the fate of this year.

“We stay connected through the highs and lows,” Teske said. “We trust each other. We trust everyone to do their job. Everyone has a certain job they have to do — whether or not Isaiah’s playing or X is playing.”