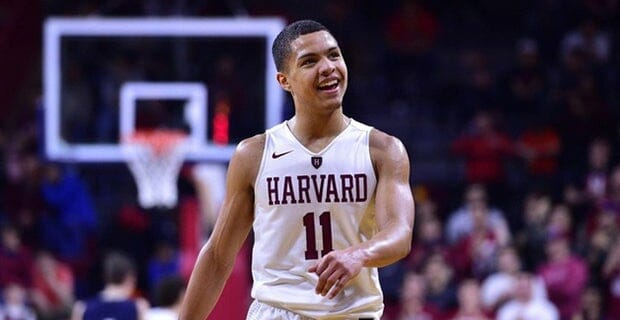 Harvard graduate transfer Bryce Aiken announced today that Michigan was one of his four finalists.

Aiken is down to Iowa State, Maryland, Michigan and Seton Hall. The Harvard grad transfer heard from 25 schools after entering the transfer portal. Aiken averaged 17 points per game in an injury-shortened senior season. As a junior, he scored 22 points per game and shot 40% from 3-point range.

Aiken discussed all four finalists with 247 Sports, on Michigan:

“I think playing for Juwan Howard would be awesome. He has the NBA experience that I would relish in learning from. I was able to watch them play on TV a few times this past season and it looks like his team has a ton of fun out there. That’s one of the biggest things that has stuck out to me. I believe he’s another terrific coach and speaking with him on the phone only reassures me of his belief in my ability to help them win. They’ll be another top 10 team and going into that situation – being able to lead those guys and represent the University of Michigan would be incredible.”

The NCAA announced today that it was extending a dead period until May 31st, meaning that Aiken, a New Jersey native, will most likely not be able to take any visits before making his decision.

After the jump, find our scouting report, video and shot chart breaking down Aiken’s game and how he could fit at Michigan, previously published here.