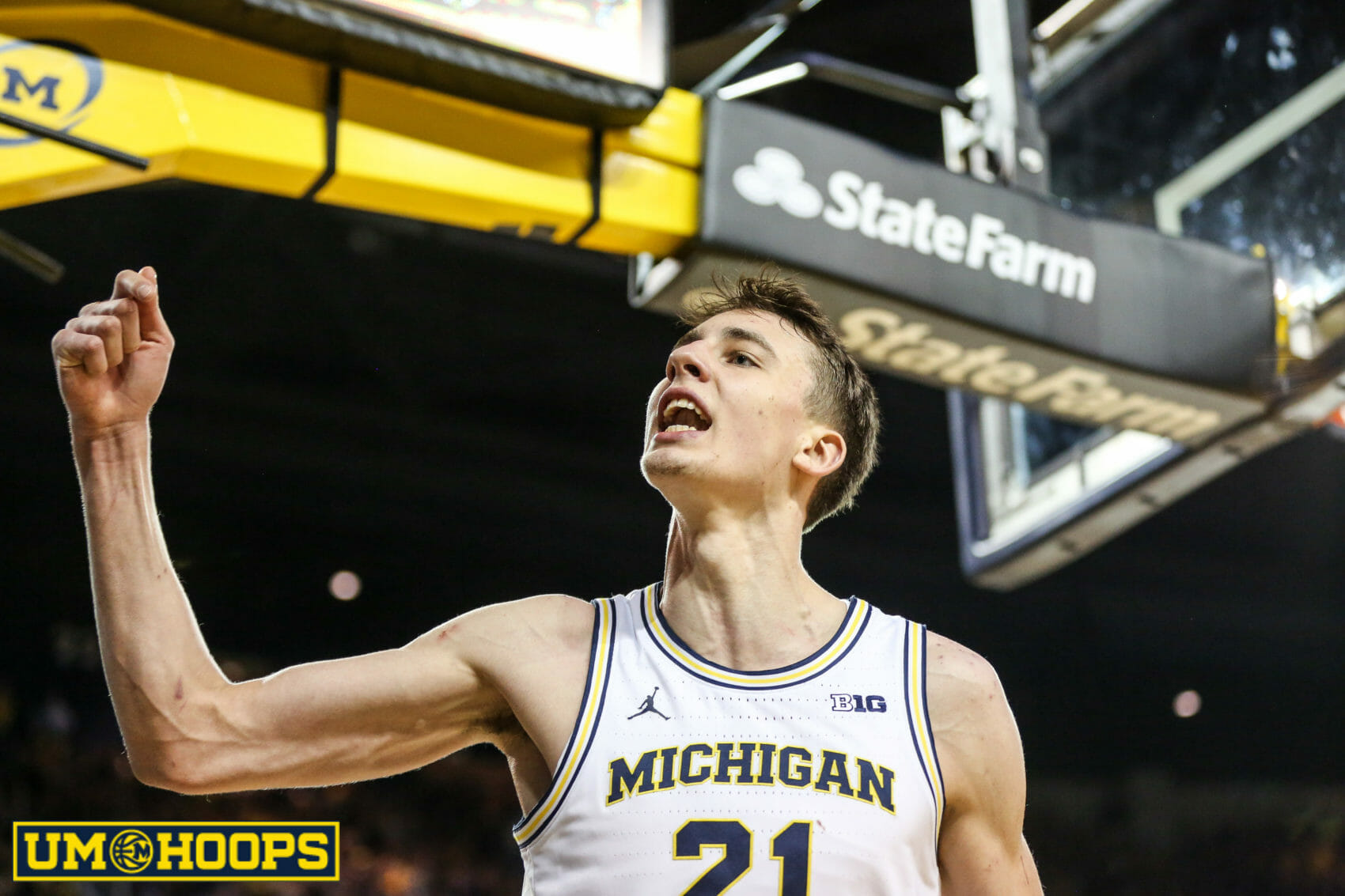 Michigan was picked to finish sixth in the Big Ten in an unofficial poll of conference media members.

Michigan was picked as high as 3rd by one writer and as low as ninth by four writers. A full writer-by-writer breakdown of the polling results can be found here.

Franz Wagner was named to the All-Big Ten First Team in a three-way tie with Kofi Cockburn and Nate Reuvers for the fourth and final spot. Hunter Dickinson (4 votes) and Zeb Jackson (1 vote) both received votes for Freshman of the Year, which went to Illinois guard Adam Miller.

The poll was conducted by Brendan Quinn and Adam Jardy and included 28 writers who cover teams in the Big Ten.


Player of the year:

Freshman of the year:

As a participant in the poll, here’s a rundown and justification of my picks.

1. Wisconsin: Wisconsin returns five senior starters from last year’s team that finished the season on an eight-game winning streak. Some of that winning streak can be attributed to torrid shooting — the Badgers made 38.3 percent of their threes from February 1st onward — and it might be difficult to replicate that perimeter efficiency but Wisconsin has a very high floor. This team is experienced and the program is dependable on defense. Maybe there’s not enough star power to elevate this group into national title contention, but I’m confident they’ll be near the top of the standings when the season ends.

2. Illinois: Illinois is looking to make the NCAA Tournament for the first time since 2013 after last year’s tournament was canceled. The Illini finished a game out of first place in 2019-20, but they overperformed their underlying metrics. They finished 30th in KenPom and only outscored Big Ten opponents by 2.9 points per 100 possessions. Ayo Dosunmu’s big-game heroics were one of the best storylines in the conference, but that is what made last year’s team special. Michigan State, Wisconsin, Ohio State, Maryland, Michigan and Rutgers all finished the year with better in-conference efficiency margin stats.

Despite the fact that the computers say Illinois wasn’t quite as good as its record, I think they have the highest ceiling in the conference. This team has a fascinating blend of pros, proven talent, and promising newcomers. There’s no better duo in the league than Ayo Dosunmu and Kofi Cockburn and they’ll have a refreshed supporting cast. Freshmen guards Andre Curbelo and Adam Miller will contribute and so will transfer wings Austin Hutcherson and Jacob Grandison.

Shooting is still a concern but there’s a clear path for this group to build on last year’s success.

3. Michigan State: Michigan State won the Big Ten for three consecutive seasons but has to replace the best duo in the conference. Cassius Winston and Xavier Tillman were game-changers on offense and defense respectively and their replacements are far from a sure thing. That being said, there’s more than enough talent on this roster for Michigan State to compete at the top of the league — even if we don’t know how the point guard and center rotations shake out right now. College basketball is a coach’s game and in a league where Fran McCaffery, Greg Gard and Brad Underwood are drawing most of the preseason picks, it’s probably worth taking a roll of the dice on Tom Izzo near the top of the pack.

There might be some things to figure out along the way but Rocket Watts, Aaron Henry, Joey Hauser and Josh Langford is more than enough talent for Izzo to win Big Ten games.

4. Iowa: Iowa finished 20-11 (11-9 Big Ten) last year with the No. 1 offense and No. 12 defense in the Big Ten. The Hawkeyes return Luka Garza — the preseason player of the year — and essentially their entire rotation, but I’m having a hard time figuring out what the national media sees in this team to project them in the top 5 or 10 nationally.  The Hawkeyes are going to score a ton of points and Garza will post monster stat lines, but Iowa’s defense has finished 10th or worse in the Big Ten for four straight years.

It’s hard to win a Big Ten title with a defense that bad. Iowa games will be must-see TV this year, but they will lose as many shootouts as they win.

5. Michigan: Michigan falls in a similar position to Michigan State but without a Hall of Fame coach to fall back on. The Wolverines have to replace their two most important players from a year ago — Zavier Simpson and Jon Teske — and their presumed replacements are uncertain. Eli Brooks can moonlight at point guard but he’s not a true point guard. Mike Smith is a true point guard, but he’s only ever played in the Ivy League. At the five, Hunter Dickinson has the potential to be a dominant offensive force, but it is hard to put too many expectations on him before he even plays a college game. Despite those concerns, Michigan still has one of the best wing triumvirates in the conference in Franz Wagner, Isaiah Livers and Chaundee Brown. Juwan Howard doesn’t need his replacements to be Simpson and Teske, just do their job so that Michigan’s wings can shine.

6. Ohio State: Chris Holtmann has two top-20 KenPom finishes in three years at Ohio State but his last two teams have gone off the rails for at least one seven or eight-game stretch. The Buckeyes will be solid again — and Holtmann has proven his chops as a defensive coach — but replacing Kaleb Wesson, Andre Wesson and Luther Muhammad will have significant consequences on both ends of the court. Justice Sueing put up impressive numbers at Cal, but on an awful team. Seth Towns is talented but still not completely healthy. Is a core of Sueing, Towns, CJ Walker, Kyle Young, Duane Washington and EJ Liddell enough to contend in the top-half of the league? Maybe, but I don’t see a ton of upside.

7. Purdue: I submitted by ballot before news of Eric Hunter’s knee injury which will sideline him for 6-8 weeks. This pick is about Matt Painter and a team that was better than its record last season. This group is going to be better offensively without Nojel Eastern and Matt Haarms, especially once Hunter returns, and I can’t imagine a Painter-led team struggling on defense. In the end, I trust Painter more than I trust Pikiell, Miller, Turgeon or Pitino in the next four spots.

8. Rutgers: Rutgers had the No. 2 defense in the Big Ten last year and brings back the majority of its core. Ron Harper Jr. is one of the most overlooked players in the league, Geo Baker has clutch shot-making ability and four-star freshman Cliff Omoruyi is one of the highest-rated prospects in program history. This team is going to be absolutely miserable to play against but the offense (10th in the Big Ten last season) is a real concern. The Scarlet Knights also had a special brand of homecourt advantage at the RAC last season that will be difficult to replicate without fans.

9. Indiana: The Hoosiers have potentially the best pro prospect in the league in Trayce Jackson-Davis, who will inevitably build on a stellar freshman campaign, but Indiana has to show me something before I’m a believer. The Hoosiers limped to a 9-11 conference record and were on the verge of making the NCAA Tournament last year but they were outscored by almost four points per 100 possessions in league games. Khristian Lander is talented but freshmen who reclassify, especially at point guard, tend to struggle in their first season.

10. Maryland: Maryland shared the Big Ten title last year but should face a significant drop off without Anthony Cowan and Jalen Smith. Returning juniors Aaron Wiggins and Eric Ayala are nice players and Darryl Morsell plays as hard as anyone, but they all have the feel of “great 3rd or 4th options”. With the addition of freshman point guard Marcus Dockery and Boston College transfer Jairus Hamilton, there’s some talent on the roster but this is Mark Turgeon’s least talented team in years.

11. Minnesota: Marcus Carr is on many voters’ All-Big Ten ballot but I can’t get there on the Carr-Pitino combination without Daniel Oturu. Minnesota went 8-12 in the league with Oturu last year and transfers like Both Gach and Liam Robbins are not enough to replace the loss of the most talented big man in the league last season.

12. Penn State: Pat Chambers’ surprising dismissal in October removes just about any upside from the Nittany Lions. I’m excited to see how Myreon Jones, Seth Lundy and Myles Dread develop but this year is likely to be a lost season in State College.

13. Nebraska: Fred Hoiberg’s rosters will never be short on new pieces but at some point, he’ll have to create some stability in his program. Thorir Thorbjarnarson and Yvan Ouedraogo are the key returnees while Pitt wing Trey McGowens, Western Illinois point guard Kobe Webster and former West Virginia wing Teddy Allen, who scored 31.4 points per game in junior college last year, should all play key roles. There’s talent on the roster but it is anyone’s guess how the pieces fit together. As long as Hoiberg insists on bringing in talent from wherever he can find it, that’ll be a fair question about his program.

14. Northwestern: Northwestern is 13-45 in the Big Ten since its surprising run to the NCAA Tournament in 2017.  Despite some perceived wins on the recruiting trail, the Wildcats continue to trend in the wrong direction on the court.

Adam Miller (Freshman of the Year): There are a lot of bodies on the Illinois roster but Brad Underwood’s team desperately needs shooters and Miller is a McDonald’s All-American who is known for his 3-point stroke. The fit works and there should be enough opportunity there on a great team.