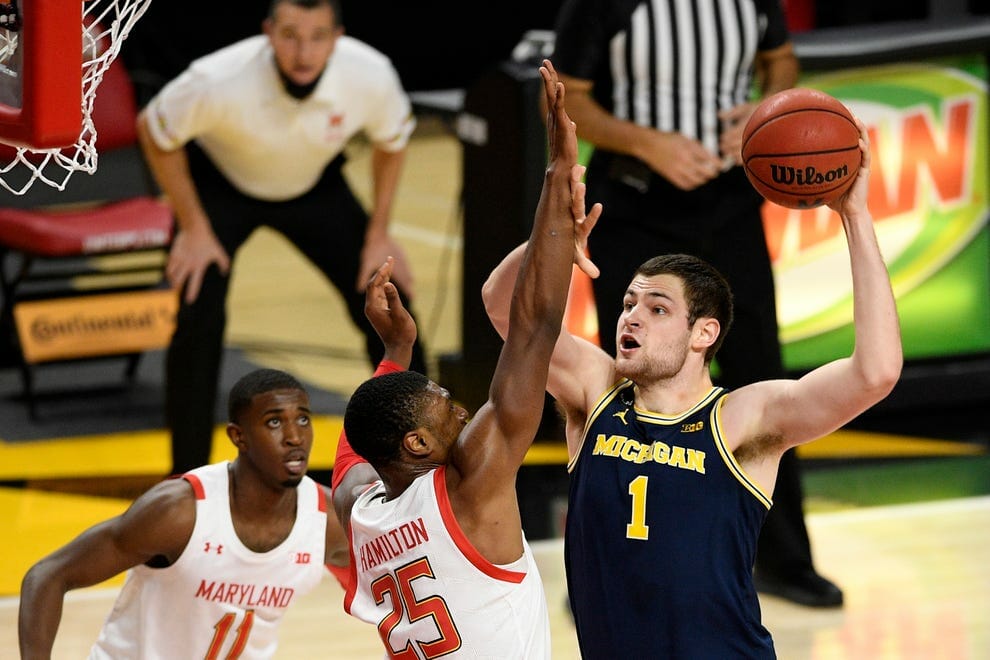 COLLEGE PARK, Md. — When the clock ticked toward zero on Michigan’s last game of 2020, there the star of the night was, standing still and swinging the gangly arms that allow him to dominate just about every opponent in the Wolverines’ way. He swung one of them into a low five with Juwan Howard and that was it for his celebrations for the night. Soon, he headed down the tunnel to a Zoom press conference where he was asked more questions about a first-half technical foul than scoring 26 points.

This is where Hunter Dickinson is eight games into his college career. Dominance is the expectation. Celebrating it would get old fast.

There’s a reason that his “freshman” label is gone. No longer is he the Wolverines’ freshman star. Three games into Big Ten play, Dickinson is simply their star. Despite being fifth on the team in minutes, he leads in scoring, with 16.6 per game, good for eighth in the Big Ten. He’s top five in the conference in rebounds and blocks, with 8.8 and 1.6 per game, respectively. As of Thursday, he’s 10th in KenPom’s player of the year standings.

And yet, if you talk to Juwan Howard, you might be fooled into thinking this is ordinary. “Hunter’s a competitor,” Howard said after the Wolverines’ 84-73 win, flatly offering up cookie-cutter praise usually reserved for those who fill out the rotation. Before you let him trick you, head on over to Maryland coach Mark Turgeon’s Zoom.

Make that every night. In Michigan’s eight games, Dickinson has reached double figures every time. Since becoming the Wolverines’ starting center, he’s averaging 19.7 points and 11.0 rebounds per game.

We’ve finally reached the end of 2020 and college basketball season is in full swing. To celebrate the occasion, and Michigan’s New Year’s Eve game, we’re offering an annual subscription for just $20.21 for the first year. That’s less than $2 per month, over half off our monthly rate!