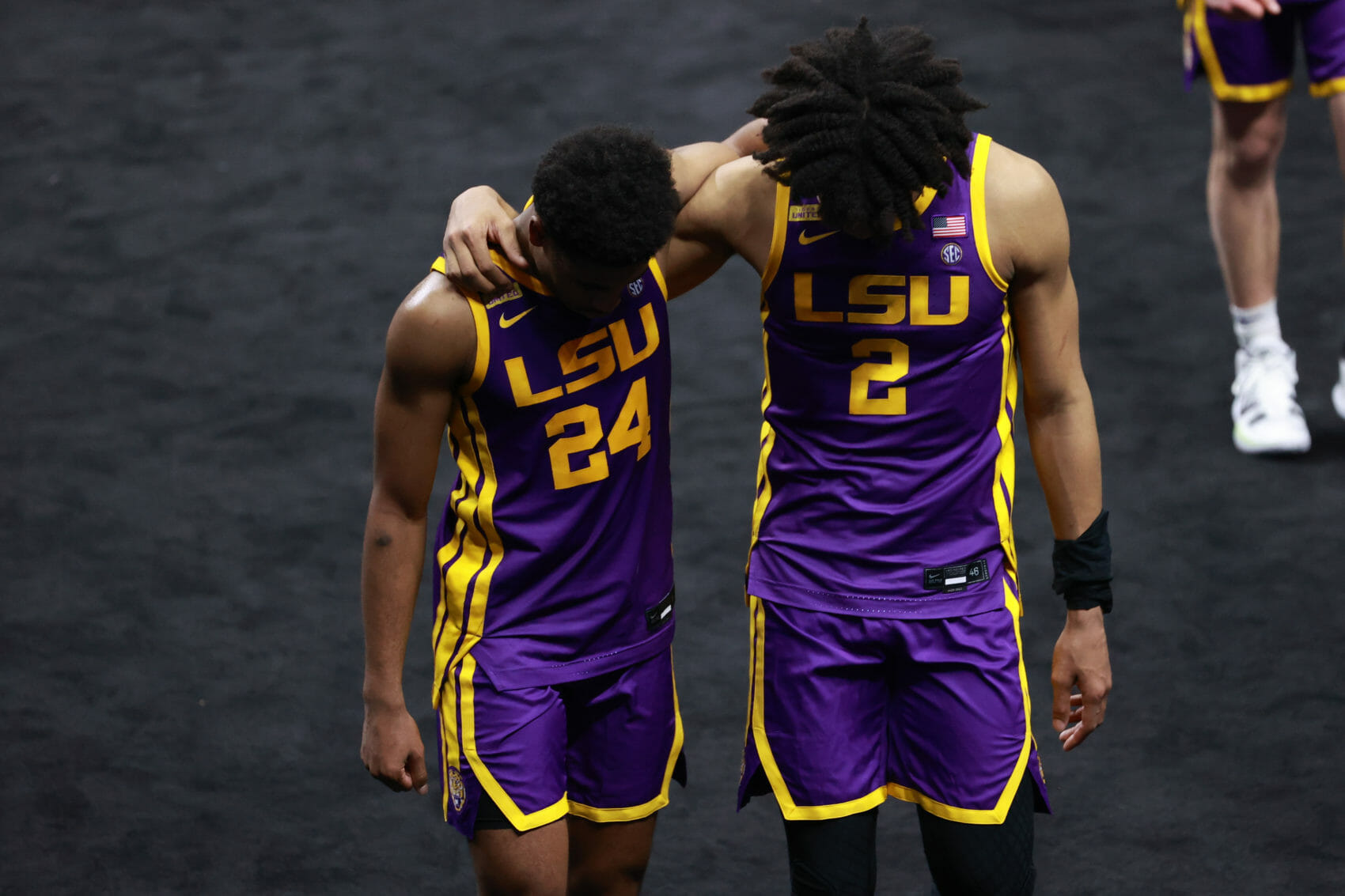 Will Wade and Javonte Smart were on the Zoom call after Michigan’s second-round win over LSU.

WILL WADE: I thought it was a great game, high-level game. The game got away from us I think at the end of the first half. We had a pretty good working margin, got off to a great start, had a great working margin. To be down one at half. We went on a scoring drive out there for 4 or 5 minutes. We got the lead in the second half by six. They made some huge threes. We just had some poor closeouts, some poor switches below the ball, and weren’t able to overcome them.

Our guys played hard, gave all they had. I’m proud of them for everything they’ve accomplished this year and fighting through the season.

WILL WADE: We just felt like we needed to keep the floor spaced. Having Days in there, Days didn’t get in a ton of foul trouble till the end. Dickinson didn’t hurt us as bad as we were expecting. Our doubles were pretty good. In the flow of the game, it wasn’t one of those games where we felt like we needed him right now.

Q. He’s like a real big energy guy. He can give you a lot on offensive rebounding. Did you have any thought to play him tonight?

WILL WADE: We thought maybe going into the game we were going to play him. But with the flow of the game, it didn’t work out that way.

Q. You mentioned the game getting away from you. Do you think it was a little bit of running out of gas? Y’all played so well in the first half, the inability to sustain it, then their ability to affect shots at the rim also seemed to let y’all settle for some perimeter shots.

WILL WADE: Yeah, I think we played two guys 40 minutes. Their run coincided with us having those guys out there a long time at the end of the first half. In the second half we kind of ran out of gas the last 10 minutes. So I do think probably that had something to do with it.

Q. Talk about Javonte’s game. He seemed to carry you in that second half. Even when you got down a little bit, he seemed to be a force for you throughout the entire night.

WILL WADE: Yeah, I mean, he stepped up and played great. I mean, he was tremendous, especially in the second half. He made plays. I think he had six, seven assists, one turnover. No, he did a great job controlling the game, controlling our team. He was phenomenal.

Very, very, very proud of him. He just capped off a great season.

Q. You mentioned the game got away at the end of the first half. In the second half you kind of regrouped, had a six-point lead with about 15 1/2 minutes to go. What happened in those next 10 minutes that got away from you there?

Q. People said Michigan looked a little vulnerable because they were missing Livers, one of their best players. They outscored you 26-2 off the bench. Was that something you were worried about, they’d come at you with a lot of players?

Q. What will you remember most about this season? Ed Orgeron talked about what he took away from it going through all the protocols and everything. What are you going to look back and take away from it?

We started peaking at the right time. Just happened to get a tough draw and a great team like this. It’s a high-level game, it can go either way. They just made a few more shots and a few more plays than we did.

Our guys really, really battled all season. I told them how much I appreciate that in the locker room after the game.

Q. Did Michigan show on film they could shoot the three that well? Second half when we hit the two threes in a row, every time you got a basket, they answered with three.

But the threes they hit on the runs really weren’t inside-out threes. They were off-the-bounce threes, poor switch-outs, things of that nature. That was stuff we can control that we didn’t do a good enough job on.

Q. Looks like y’all did a pretty good job on Dickinson in the first half. Looked like you frustrated him a little bit. Did you feel good about that matchup at halftime?

WILL WADE: Yeah, I thought we did a good job trapping him, confusing him down there, making him work. We had active hands. When we got tired, they just got way too comfortable. I think they had 13 assists on 16 made baskets. The problem in the first half was our closeouts, driving our closeouts. We just did a poor job with that.

Q. I know a couple times this season you talked about this is a team I expected to see, then you would have some lulls. Do you feel like tonight you went out kind of giving your best shot and the best of what your team could be?

WILL WADE: Yeah, we played well. We ran into a great, great team. I mean, we could have done some things differently. We could have made a few more shots, finished a few more in the lane, had a few better switches defensively. We certainly could have won the game.

I can’t fault our guys’ effort and how hard they played. We were prepared and ready to go. We just couldn’t sustain it for 40 minutes.

Q. This is likely going to be the final game that this group plays together, but for some of your star players. Could you talk about the future of LSU basketball as you see it, maybe some of the plans of how you start the process of moving forward.

WILL WADE: We’re certainly going to lose some very, very good players. We’ve got some talented young kids in the program that we feel really good about. We’re going to try to mix in some veteran guys here in the spring, have two or three scholarships to mess around with and get some talented veteran guys to join our young core that’s really, really good.

We’ve got to keep the young core together, keep those guys together, get those guys in the gym, get back to work, add a couple veteran pieces. I think we can be right back where we are tonight.

Q. Results notwithstanding, how exciting was that game, especially in the first half? Do you feel like the energy you expended in that first half, maybe y’all couldn’t sustain it in the second half to pull out the victory?

JAVONTE SMART: Coming into the game, we knew it was a big game, playing against Michigan on one of the biggest stage you want to play in.

I just wanted to give it all to Michigan. They came to fight. We came to fight. But our energy wore off. I thought we should have just kept our energy, kept going. But during the game, energy went off. They just outplayed us at the end.

Q. What point in the second half did the offense really just kind of seem to stagnate? At what point did you feel like maybe it was starting to get away from you a little bit and how did you try to rectify it throughout the end of that game?

JAVONTE SMART: Yeah, during the middle of the second half we felt like we was doing a lot of one-on-one ball. All year that’s what we’ve been doing all year. So we just tried to pass the ball to each other, play as a team, continue to play as a team. Hit some shots, but they hit some big shots. They hit a couple big shots. We was just trying to get some stops really on the defensive end, trying to get stops, because we knew they was going to score the ball. We just needed to get stops.

Q. It seemed like in the middle of the second half, I think they had 9 out of 10 shots. Y’all started missing. Did you start pressing? Did you hit a rut there?

JAVONTE SMART: Yeah, you know, we wanted to press them. In the Big Ten they wasn’t pressing that much. Coach told us we was going to start out pressing.

They hit some big shots, like I said. We wanted to speed the game up. They were still hitting some big shots. We came down and missed a few shots.

But that happens in the game. We just wanted to keep fighting hard. The outcome, we took an L.

Q. You came back for a reason this season. Clearly you showed tonight you’re capable of leading a team. Big picture for a moment, talk about what this season has meant to you, playing through all the difficulties to get to this point. Do you feel like you made the right decision in hindsight now?

I think this year was one of the biggest years you can ask for. Pandemic, COVID. It was hard. I had to sit out a few games. There was just a lot going on. I think it helped me for further on.

I think it was a really good year. I’m proud of our guys, our younger guys, and even Trendon and Days. Like I said, it was a big year for us. I was looking forward to winning it all, but we fell short to Michigan. Like I said, I want to give it all to them. But I felt like I learned a lot this year.

Q. When you look back on what you and Trendon and Darius, Cam, have accomplished together, how close are you guys? How have you grown together since you’ve been on campus?

JAVONTE SMART: Yeah, me and Days came in together. Me and Trendon, we always together. You know, that’s my guy. We’re roommates. We was always working out together. But Cam came along. Cam was kind of quiet. He’s not as friendly as other guys. But Cam came along and started interacting with the guys. All four of us are roommates. We really have no choice but to interact with each other.

Q. How difficult was it going in the second half to get your shot inside? Seemed like their height started to affect y’all’s shot selection at some point.

Q. It seemed like they were able to redirect your offense. You had to look for outside shots. Was their height a significant factor because of that in the second half or was that the looks you were getting?

JAVONTE SMART: Yeah, I think that was just the shots we was getting. With all the guys, we have a lot of shot makers. I think the open shots was there. We take them because we make them most of the time. But they just wasn’t falling.

I think we started attacking a little bit, and started to open everything up for the three-point line and the inside.

Q. When the first cancellations happened during the season, did you question that the season would continue?

But I want to give it all to the NCAA for being able to have this.