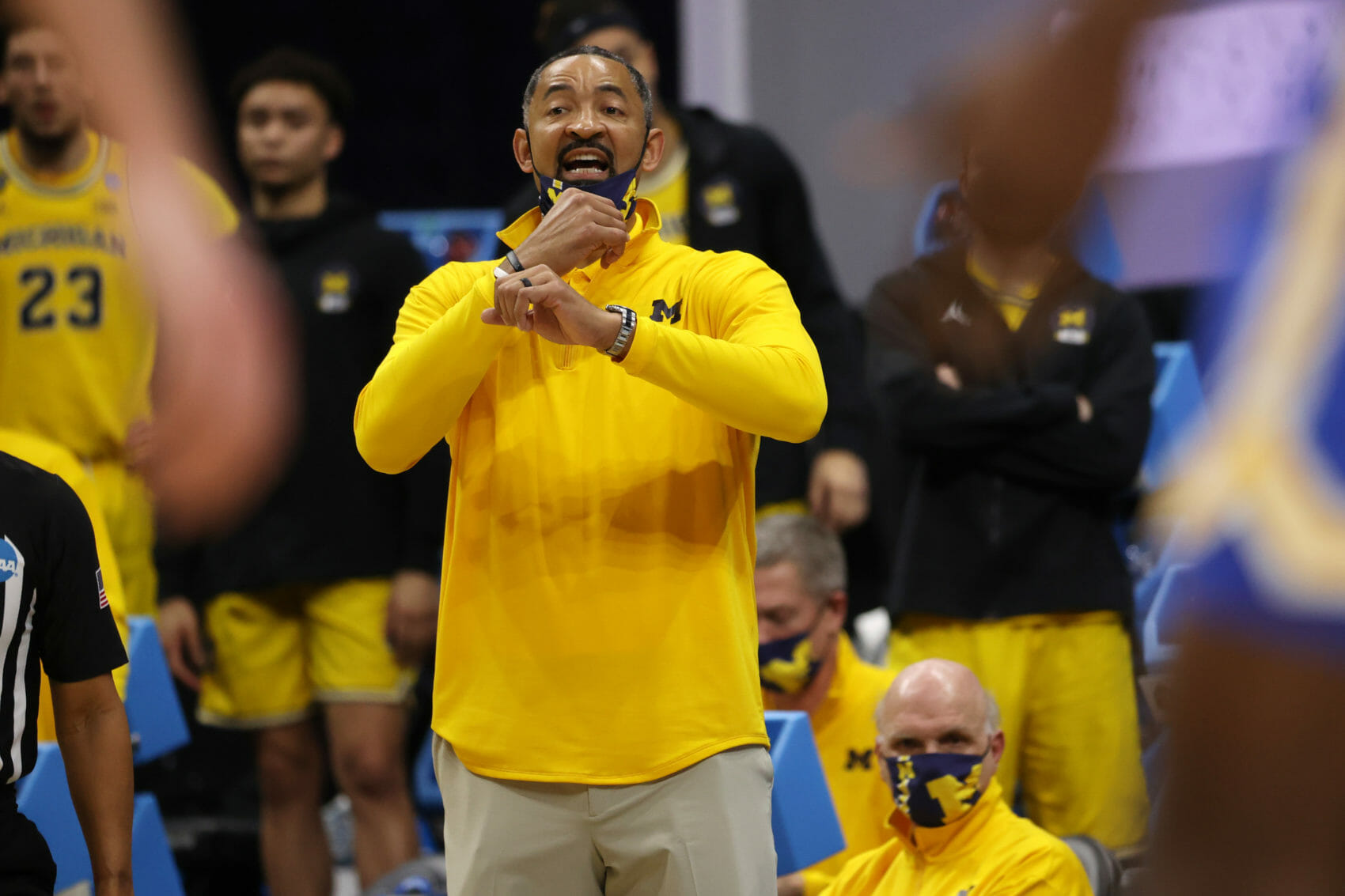 Juwan Howard and Eli Brooks met with the media after Michigan’s 2-point loss in the Elite Eight.

JUWAN HOWARD: Just want to say that it was a great run this year for this team, for this staff. Very disappointing loss to end our season this way. I give a lot of credit to the UCLA Bruins, their head coach, players, for fighting hard to earn a victory to advance to the Final Four.

It’s very disappointing for our guys, working extremely hard this year, coming down to, you know, one possession. And that’s how it goes sometimes. In the game of basketball, there’s one or two possessions that can really either help you or hurt you, and for us, we came up short.

But I’m so proud of this group and how they competed all season long during some very difficult times, it’s been a very challenging year but at the end of the day, we all need to walk out of this building with our head up with nothing but humility, gratitude and dignity.

Q. You talked a lot about April 6, being the last team standing, but obviously that didn’t happen. You won a Big Ten title and did a lot of good things. You just touched on it a little bit, but I guess what is the message to the team when they are probably heartbroken but you had a good year?

JUWAN HOWARD: The message is, you know, we should be very proud of each and every one of them on how they have sacrificed, worked extremely hard throughout the year back in June and making all this work. There are a lot of folks that deserve a lot of credit that is outside of this team that have really breathed a lot of life into the group.

But at the end of the day we learn from this and we will grow from it, and definitely we all will get better, starting with me first.

Q. A lot of times after a tough game like this, one of the seniors will say something that touches the team. Can you share something one of your guys shared with the team?

JUWAN HOWARD: To be honest with you, our locker room, what is said basically stays in the locker room and it’s just a very disappointing game, and the emotions right now is not where — like the other locker room, at an all-time high.

Just want to say this; that I’m so proud of our group and how they fought so hard, not only in this ballgame but all season long.

Q. Wonder if you can walk through those last two time-outs, the plays that you drew up and what you saw play out?

JUWAN HOWARD: We got the look, got the shot that we wanted. Unfortunately there’s not much you can do with :05, but that shot it, was a nice little heave. Unfortunately it just didn’t go in. Before that we got an open look and just fell short but overall, I love the fact how our guys executed down the stretch.

Yeah, both teams missed some shots that we normally make, if you look at the shooting percentage, you know, it was truly a Big Ten style of play with 51-49 and with UCLA shooting 38.9, 39 percent and Michigan shooting 39 percent from the field; they shot 23 percent from field, we shot 27 percent. Fortunately enough for them, they were 6 for 7 from the free throw line and we were 6 of 11. So we missed five free throws. They got seven offensive rebounds; we got 11. They got eight turnovers. Unfortunately for us we had 14. Reading that out to you guys, that was the difference of the ballgame. But it was a hard-fought game on both sides.

Q. Offenses on both sides, hard to get going all game long, but you guys shooting uncharacteristically, was that your defense? Were your guys tight at all? What led to the difficulty shooting, do you think?

JUWAN HOWARD: We played so hard, and UCLA, they have perimeters that are very good one-on-one of creating their own shot. They also do a very good job of attacking the paint. And we’re similar in a lot of ways, too. Both teams expend a lot of energy on the floor, just fortunate for them they were able to win the game by two points.

Q. You threw everything out on the floor tonight. What are you hoping to take from this season into the next one?

JUWAN HOWARD: There’s a lot to be proud of, and I am, and I know I can speak for the staff which I’m extremely proud of our staff on how we stay connected. I’m also proud of the group how I felt we were one of the most connected teams throughout the season during a challenging time and I’m sure a lot of coaches in college basketball can say the same thing, too. You can learn a lot from this year, which I’m sure there’s a lot of things we’re going to take away and grow from.

Our goal is to be better next year. We understand they are going to be, you know — some guys moving on because they are seniors. We are going to truly miss them. Whoever is returning, we are going to welcome. Newcomers that we are going to do our best to develop, which we pride ourselves on player development and growing guys in our culture.

Our goal is to be prepared for next year, and this summer we are going to work extremely hard in preparing our guys, and then also in the fall so we can play for next season. But right now, it’s hard for me to start thinking about next year because right — on my brain, this game is very fresh. It’s going to be tough to sleep tonight, but I’ll get through it.

I wonder if there’s something wrong with the audio. I don’t hear anything.

Q. I don’t know, I’m just going to unmute myself. Can you hear me?

JUWAN HOWARD: Yes, now I can.

Q. I’m wondering if you can speak, now that the season is over, I don’t know if there’s anything you didn’t share during the season about how hard this season really was with COVID, just dealing with this stuff. I know it was something you spoke about throughout, but I don’t know if there’s anything else you could share about the difficulty of navigating this particular year.

I’m a non-excuse individual, but I will continue to keep playing for all our loved ones that is out there throughout the world that is facing this very challenging time.

Q. Can you just go through what you saw on the defensive matchup with Juzang and what he was able to do and how you were trying to adjust or adapt or whatever it took to slow him down?

JUWAN HOWARD: Juzang, he had a very good game, but every shot or every point that he got, he worked hard for it. Our guys, different guys that was guarding him, was making everything tough. There were some shots that he made, which was a runner, I recall in the first half. It was very challenging, difficult, but he was capable of getting it in.

You know, other guys like Bernard, Jaquez, which are very good offensive players, they also shoot the ball extremely well. It wasn’t their night but Juzang had it going.

Q. You mentioned it’s going to be hard to sleep tonight, of course, when a season ends like this. Because there were so many good looks down the stretch, shots seemingly open, does that make it even more difficult to stomach because you did get lots of shoots, inside shots, too, that you wanted?

JUWAN HOWARD: When you lose, it’s very challenging. It’s hard to start thinking about, you know, would of, could of, should have. It’s not about that. It’s about how can we improve and how can we get better.

Let me deal with this loss right here, and — this place is messed up. It’s dirty all over this place (chuckling).

Q. I know Franz had a rough night. Can you take me through what you saw from him? What made you trust him down the stretch despite the struggles?

JUWAN HOWARD: Franz is one of the reasons why we’re here in this position. I always have trust in all my players, and it’s never one guy fall because he doesn’t shoot the ball well. Together as a team, you win together and you lose together.

Q. It’s tough in locker rooms after games like this, everybody wants to win so badly and everybody had a shot at the end. How did you guys go about consoling each other, boosting each other after maybe something you said to somebody or that somebody said out loud?

ELI BROOKS: I think at this point, it’s just more individual moments. Coach addressed the team, but people — people went up to people individually and talked to them. But yeah, that was about it.

Q. If you could kind of walk us through the plan and then the execution of the final, I guess it would have been four shots, from Franz’s missed three and your put-back to Mike’s end-to-end shot and then the final one, if you can recall?

ELI BROOKS: We were in place to make shots, and came up short, yeah.

Q. You guys only scored 49 points. Did it feel off kind of in the huddles and out there on the court or was that just the way the ball bounces, so to speak?

Q. Curious as a senior what you personally have taken from this season?

ELI BROOKS: I think just the adversity that we had. I mean, everybody had in this season. Just how close this group was and how locked in and mentally tough this team was all season because there’s a lot of teams, a lot of opportunities that we could have took the easy way out and made excuses and we didn’t do that. We stepped up and we played hard every single game.

Q. Was it extra frustrating to lose not playing your best? You had some nice performances coming in, and you beat yourselves in some ways.

ELI BROOKS: They played extremely, extremely hard. They earned that win. We’re not going to take anything way from them. But they made everything challenging, yeah.

Q. If you wouldn’t mind a follow-up here. If you could speak to how difficult this season really was navigating through COVID and whether all the protocols you had to deal with were, I guess, worth it to you in the end?

ELI BROOKS: Yeah, I mean, there’s a lot of sacrifices to be made throughout this season just to get through the season. I mean it, was worth it because we had a good group of guys and we got to play a game we love. But it was difficult.

Q. I know the loss is still fresh, but you and several seniors on your team do have the option to return for next year. Have you put any thought into that yet, and have any of your teammates talked about it with you?

ELI BROOKS: I think that’s a conversation to be had in our exit meeting. I mean, I talked about it with my family and weighed the different options, but I didn’t come to a conclusion. I can only speak for myself.