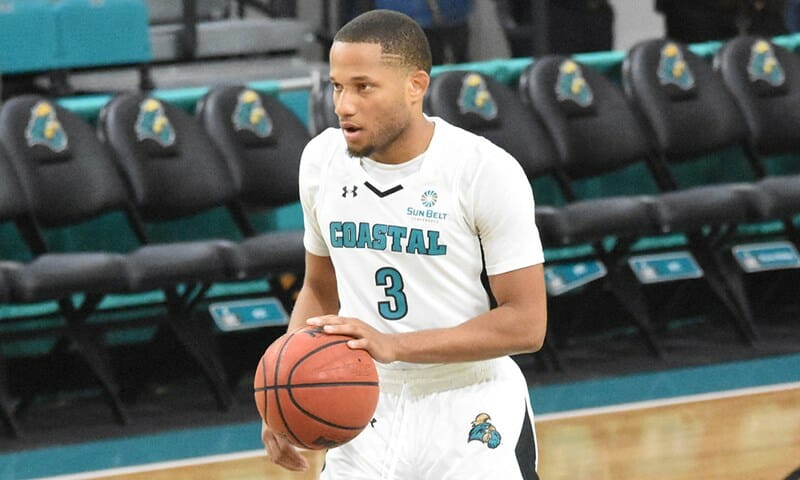 Michigan formally announced Coastal Carolina transfer DeVante’ Jones as an addition to the 2021-22 roster this afternoon.

Jones recently announced that he withdrew from the NBA Draft after performing well at the G-League Elite Camp. The Wolverines also officially announced that Jaron Faulds will use his extra year of eligibility and be a part of the 2021-22 team.

Jones has been admitted to the university to pursue a master’s degree in social work, and will have immediate eligibility. Howard also announced Wolverine forward Jaron Faulds joins fellow senior Eli Brooks in taking advantage of the NCAA’s allowed year of eligibility due to COVID-19.

“First of all, I am very excited to get to Ann Arbor,” said Jones. “It felt like it took forever, but being here just a few days was worth the wait. Now that everything is in order, I finally get to get back on the court, compete and get better with my new brothers.”

As a junior, Jones averaged 17.4 points per game while he dished 183 assists (5.7 apg), the sixth most in a single season at Coastal Carolina. Highlighted by 20 games of five assists or more, he tallied a career-best 10, twice — Greensboro (Dec. 4) and N.C. Central (Dec. 14). After redshirting his freshman season, Jones was named the Sun Belt Freshman of the Year in his first full playing season as he averaged 14.6 points with 4.1 rebounds and 4.5 assists per game.

On May 1, Jones announced he would enter the transfer portal (choosing Michigan) as well as exploring the NBA Draft. In addition to NBA team workouts and interviews, he participated in the NBA G League’s Elite Camp on June 19-21 in Chicago. He withdrew from the draft on Monday (July 5).

After transferring from Columbia during the 2018-19 season, Faulds has played in 15 games for the Wolverines after sitting out a season. He helped the Wolverines to two straight NCAA Sweet 16 appearances, the 2021 Elite Eight as well as helping the Maize and Blue to its 15th Big Ten title in 2021.

With the additions of Jones and Faulds, the Wolverines have 17 players on their roster.