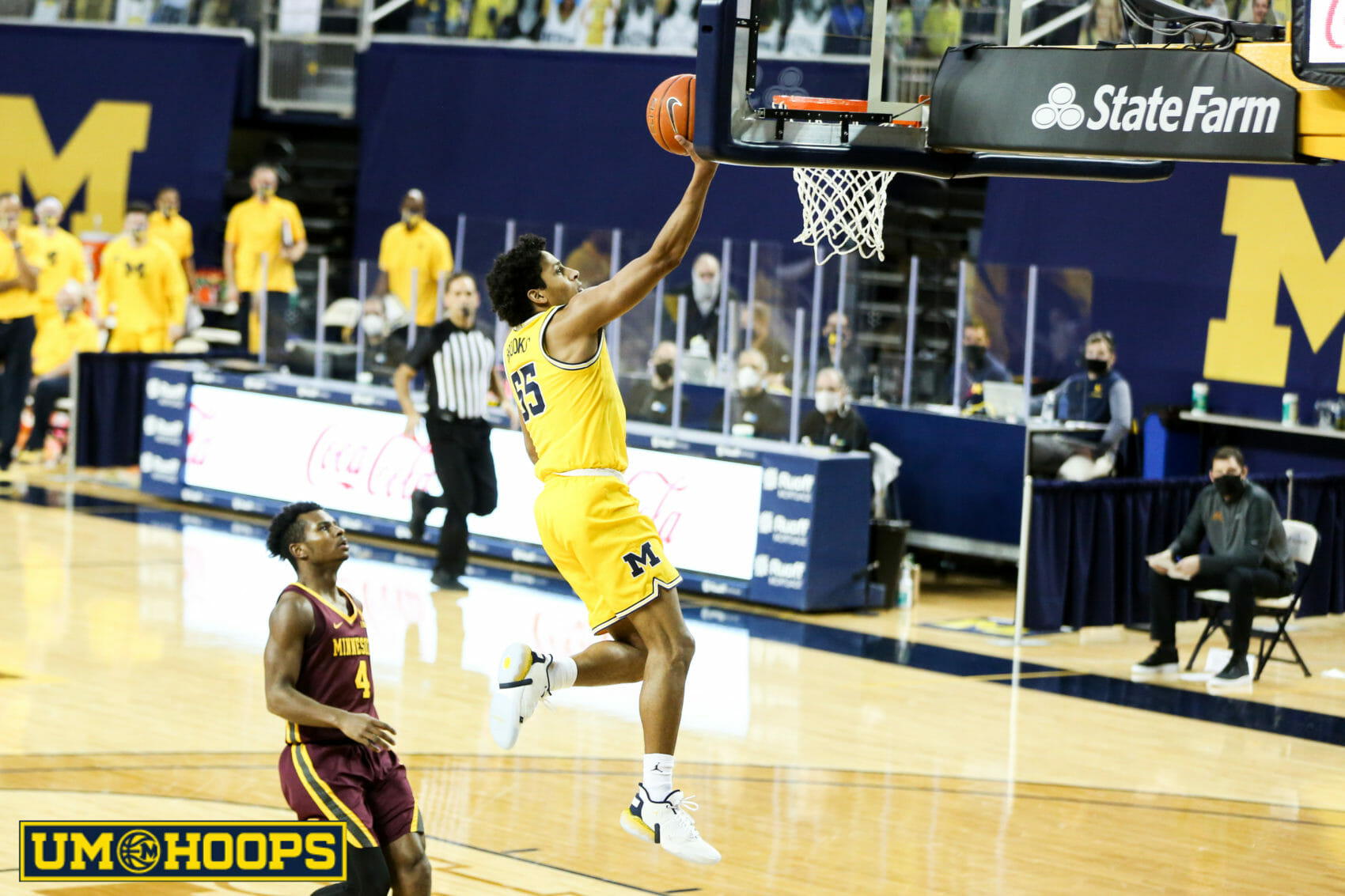 The series will be broken into five parts over the course of a week and our second installment of players 20-16 is available below:

Brooks is one of the hardest players to rank in a list like this because of his consistency and high floor but relative lack of upside. He’s a safe bet to be one of the 20 most important players in the league by year’s end, but it is also likely there will be several players ranked below him who make legitimate cases as top-15 players in the league based on their production.

At this point, we know what Brooks is and we know how important he is to a Michigan program looking to defend its Big Ten crown. He also should see a modest uptick in offensive responsibility after the departures of Mike Smith, Franz Wagner and Isaiah Livers.

There are players ranked below Brooks that could score more points or rack up more assists per game this year, but those players haven’t proved they can contribute as much to a winning basketball team as Brooks.

Other than a pair of games he missed due to injury, Brooks has started every game that Juwan Howard has coached at Michigan. He’s a low usage offensive player, but he’s one of the league’s best perimeter defenders and shot 39 percent from 3-point range last year. Brooks has a well-earned reputation as a defensive specialist but Michigan’s offense was 11 points per 100 possessions better with Brooks on the court last season, per HoopLens.

Harrar might not have as much flash on the low block as some of the elite scoring bigs in the conference this season, but he’s the type of player that every Big Ten coach wants on his team. He averaged 8.8 points and 8.8 rebounds per game last season and averaged a double-double during January and February. Harrar finished the year ranked 9th nationally in offensive rebounding rate and led the Big Ten in free-throw rate with 93.3 attempts per 100 shot attempts in Big Ten games.

Through his first three seasons, he hasn’t been a prolific post-up scorer which will make it interesting to see if he adds to his game as a graduate senior under new head coach Micah Shrewsberry.

DeVante’ Jones comes to Michigan from Coastal Carolina where he was named the player of the year in the Sun Belt after averaging 19.3 points, 7.2 rebounds and 2.9 assists per game.

Juwan Howard will ask him to make a similar transition to Mike Smith, who went from high-level scorer at Columbia to pass-first point guard at Michigan. Jones hasn’t flashed as many lead guard skills as Smith, who was always an elite passer, but he’s a talented backcourt option who performed well at this summer’s G-League Elite Camp before opting to return to college.

The bread and butter of Jones’ game is his in-between scoring ability and he has one of the most effective floaters in college basketball. He should be Michigan’s starting point guard this year but he has to prove that he can hit enough 3-point shots to keep defenses honest and expand his game as a pass-first ball screen handler.

After sitting out the 2019-20 season due to NCAA transfer rules, Sueing averaged 10.7 points and 5.5 rebounds last season for an Ohio State team that earned a No. 2 seed in the NCAA tournament.

While his scoring numbers were down from his first two seasons at Cal, Sueing’s efficiency rose last season as he shot a career-best 36.1 percent from behind the 3-point arc. He ranked in the top 25 in both offensive and defensive rebounding percentage in conference play and was eighth in the league in free throw rate.

As a redshirt senior, Sueing should take on a more prominent role in the Ohio State offense following the departure of Duane Washington. Given his size and versatility to play both on the perimeter and finish at the rim, Sueing enters the season as one of the league’s most versatile and valuable wings.

Murray enters the season as the Big Ten’s third-best NBA prospect according to Jonathan Givony of ESPN.com. As a freshman, Murray came off the bench for Fran McCaffery and flashed major potential as a frontcourt scorer and rebounder.

After arriving in Iowa City as the nation’s 334th best recruit in the 2020 class according to the 247Sports Composite, Murray averaged 7.2 points and 5.5 rebounds in just 18 minutes per game. He was the Big Ten’s seventh-best offensive rebounder and shot 64.5 percent on 2s in conference play, which was second-best in the league.

Defensively, Murray was one of the few bright spots for the Hawkeyes last season as he ranked third in the conference in block percentage despite only being 6-foot-8. The graduation of Luka Garza and the departure of Joe Wieskamp will thrust Murray into a featured role for the Hawkeyes in his second season. Breakout candidates are often difficult to place on preseason lists, but Murray could definitely outperform this ranking if he’s the focal point of the Iowa offense.