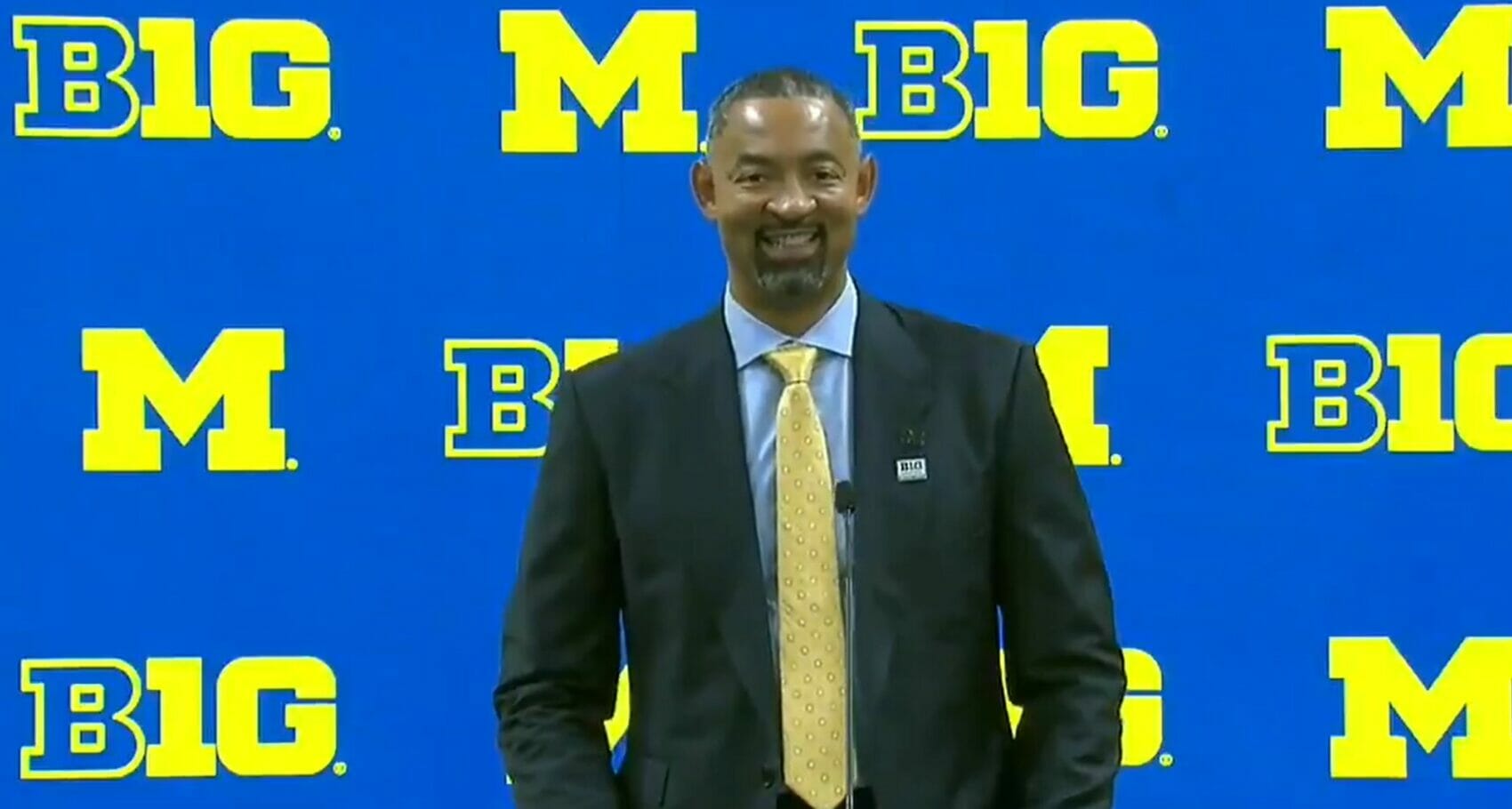 Juwan Howard was on the podium this morning at Big Ten Media Day in Indianapolis. Howard discussed his returning team, his relationship with Kim Barnes-Arico, retaining talent, and much more.

JUWAN HOWARD: Good morning, everyone. That fight song never gets old to me. That’s all I will say right there. Brings me great energy for this morning. Good to see everyone. I want to say thank you, Commissioner Warren, Big Ten Conference, all the people that work behind the scenes on making this all work. Last season, it was a lot of fun. We also thankfully were safe during the tournament situation. We enjoyed it. Our guys really had fun throughout the process of the games that were played during one of the toughest conferences if not the toughest conference in basketball. I am honored to be the head coach at the University of Michigan men’s basketball. If any of you have questions today, feel free. I’m here to answer them. We’ll have some fun with it.

Q. I can see when you got the job, the expression on your face, the emotion going through your heart. That has to kind of settle in a little bit before you actually start thinking about basketball. What do you think about bringing Eli and Hunter back with some of the new recruits?

JUWAN HOWARD: First I would say this, yes, the emotion that I displayed when I was first hired showed how much I cared about this opportunity. When someone puts their heart in it, obviously they going to give you everything. I think our players, school, alumni, everyone that supports the program, seen that emotion being displayed and shared within our team. Last season during the pandemic, during the COVID year, how our team responded and how they all was connected and played for one another, it was beautiful. It was inspiring to watch. I learned a lot from that group. I commend them all the tests they had to go through, to still buy into the vision, stay locked in on the main thing being the main thing, but at the same time with all that, having fun. I’m speaking of they the players, student-athletes, the staff, to enjoy it because it was tough. Now with Eli coming pack, Hunter returning as well, we also have Brandon Johns, Adrien Nunez, then a mixture of some newcomers as far as freshmen, sophomores, Terrance Williams Jr., Zeb Jackson and Jace Howard. We have a very competitive group. Every day I drive into work, I’m so excited to get an opportunity to go in there and coach and learn from them. We learn from each other and grow together. As the season progresses, get ready to start soon, it’s all about health. We want our health first. We want to continue to keep striving to be a competitive group.

Q. Kim was up here talking about the relationship between the two programs. Could you do the same, share some insights on that.

JUWAN HOWARD: Well, I’m so happy for Kim and the program, the success they had last season. They had to endure and deal with a lot. The way how they responded was a reflection on the head coach. She’s a great person, a fighter, smart. She has an amazing staff. Then to see the success of how it all panned out towards the end. Unfortunately they did not want the season to end the way it did, just like us. I’m just happy to be a part of and sharing in the same building with someone who is opening, welcoming, fun, smart. I sit in some of her practices and watch, watch how her team competes, watch her staff is able to help lead those young ladies and developing them to become the best version of themselves. I’ve learned a lot from her. I will continue to support her program, the players, because they are beautiful people, man. They’re very talented. I’m going to be their biggest fan.

Q. A lot was made when you came back to Michigan after all the years in the NBA. What was the most important thing you learned in making that adjustment? Could you tell me your best Mike Woodson story.

JUWAN HOWARD: The first thing I learned when I came from NBA to the college level was getting to know everyone in the building, know the names of the managers, getting to know the folks that runs the building, keep the place clean and safe for us. The second adjustment was the recruiting. The recruiting was a lot different, coming from the NBA, everyone come to you. Now you have to sell your program, you have to sell yourself, the vision, the culture. The recruiting was an adjustment. The best Mike Woodson story I would say would be back when Coach Woodson was in Atlanta and he was watching the Atlanta Hawks. I was playing for the Charlotte, at that time, Bobcats. Coach Woodson having an amazing, talented group, played in the NBA for so many years, had success while doing it. He’s always had a very competitive team that plays hard from start to finish. I expect that with the Indiana University on how his team is going to play this season. A smart coach, hard worker. What he’s learned from the NBA, not saying he’s going to do everything he did over his years coaching in the NBA, but it shows the guy knows basketball, I know his team is going to be competing from start to finish. He’s going to be another coach, along with the other coaches in the Big Ten, that keep me up at night trying to see how we going to scout against his group and prepare for his team.

JUWAN HOWARD: I’ll first start with the person. I was impressed with getting to know him and his family, as far as the high-character individual he is, a great student, his knowledge for the game of basketball. Then I got to know more about his pedigree, what he come from. I have a little bit of knowledge about Chicago basketball, some of the guys that come out of that city, how basketball is considered the number one sport, the passion, the competitiveness being a part of the Public League South where Simeon, he ended up transferring to. Yes, he did blow up. People did not know much about him. I had a chance to watch him when my son, Jace Howard, was playing in the Under Armour tournament. At the time it was 16U. I watched Isaiah’s team play when he was playing for the Illinois Wolves. This kid is pretty special. He has an amazing skill set. After talking to him more and more, seeing what he wanted from his college future, I just felt Michigan was the best place for him. That’s why I went after him. Happy that he’s a part of our family.

Q. Eli Brooks, Brandon Johns, you mentioned them coming back. I look around the country and I see attrition at a high level. Your program seems to retain players. What is it about your program that seems to get players to want to stick around and compete?

JUWAN HOWARD: It’s Michigan. Not saying it in an arrogant way, but it’s a place that keeps reeling you back in. The Michigan block M never gets old to all of us. The energy that you go into the building, the building I’m speaking of is the Michigan Stadium, watching a football game with 115,000 plus there cheering on Coach Harbaugh’s team. Then you have the Michigan education. That speaks volumes in a lot of ways. Top 10 in law school, top 10 in business school. You can go on and on and on. You talk about Michigan athletics, a guy by the name of — our athletic director, Warde Manuel, has done an amazing job with his leadership, finding fine coaches in every program that find ways to really help and care for our young student-athletes in a lot of ways to help them become powerful young men and women that they can do great things. Eli and many others have trusted that vision. We just hope that we can continue to get more Eli Brooks of the world a part of the University of Michigan family.