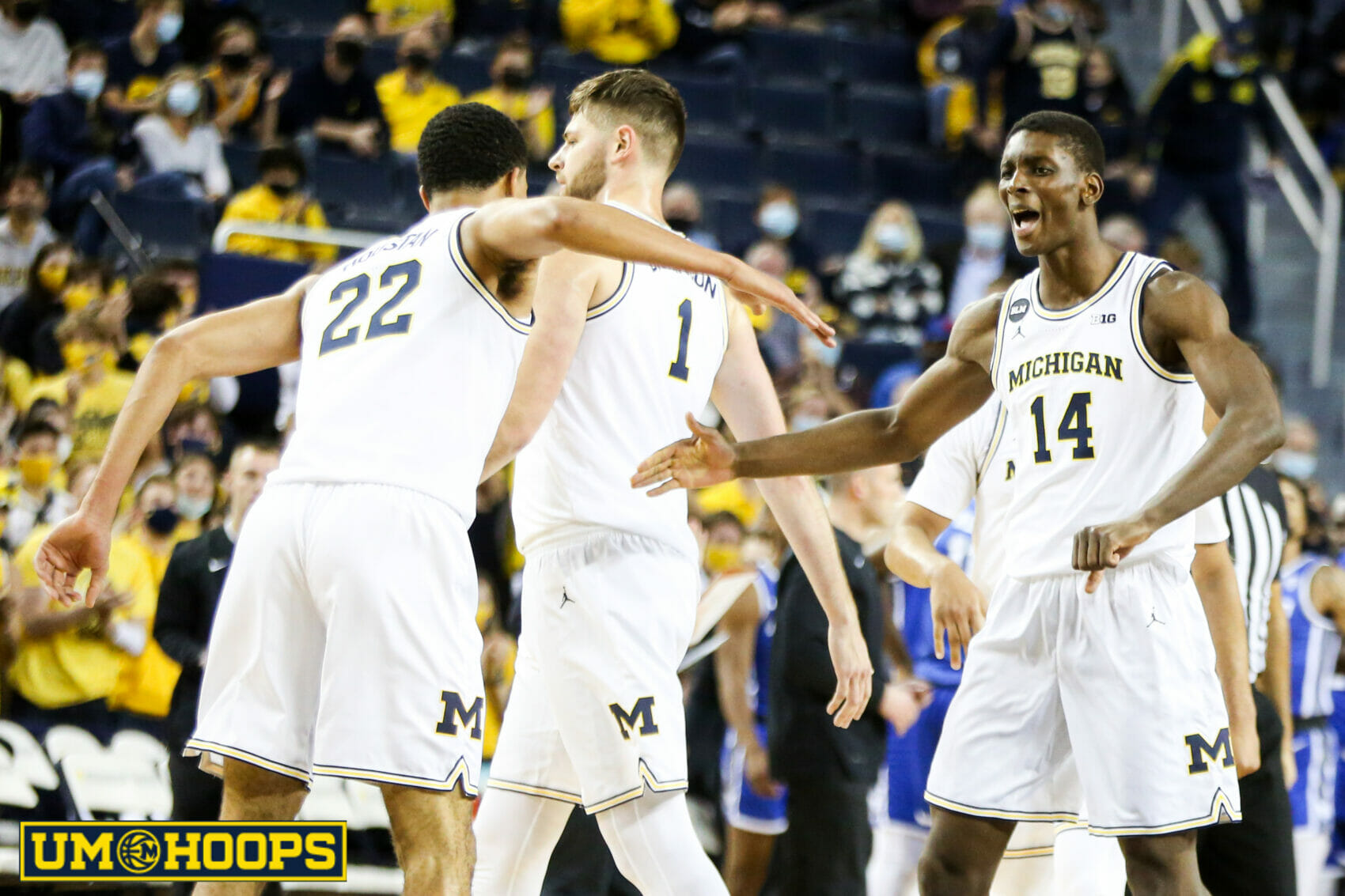 Michigan raised a banner Wednesday night. Lofted it high into the rafters, wrapping one final bow on last season, a magical ride that culminated in a Big Ten championship and fell just three points shy of a Final Four.

During the pregame ceremony, members of that team craned their necks, gazing up at the jumbotron to watch a made for the occasion highlight reel. A few feet to their side, a number of players — including the six-man freshmen class — huddled towards the end of Michigan’s bench, watching on.

They weren’t around for last year’s run; the banner isn’t theirs.

But, if Wednesday’s season-opener is any indication, they have the potential to raise one themselves.

In an 88-76 track meet of a victory over Buffalo, Caleb Houstan and Moussa Diabate dazzled with flashes of limitless upside. In the first half, the pair of 5-star freshmen certainly appeared as advertised.

Houstan, drawing the start, whipped Crisler Center into an early frenzy. His first basket came off a silky finger roll, following a crafty ball fake. Minutes later, he flushed home a fast-break dunk, staring down his defender in the process.

Teammates have lauded Houstan for his silky 3-point stroke, but in his collegiate debut, he proved to be more than a marksman.

“Caleb, he’s shown so much poise as a young freshman,” Juwan Howard gushed after the game. “Think about it — this guy reclassed up. So he’s supposed to be a senior right now in high school, but he decided to make the jump. With his maturity and how he competes out there on the floor, you just think he’s been around for a very long time.”

Diabate, a 6-foot-11 bundle of energy, impressed in a similar manner. As the first player off the bench, he wasted little time wowing with a series of sky-scraping blocks.

In one roof-rattling sequence, Houstan snared a rebound, pushed the ball down the floor and whipped a baseball-style pass to Diabate, who finished with a two-handed dunk and a flex.

The show was on.

“Moussa, he’s just so gifted,” Hunter Dickinson said. “He’s just a mismatch, a problem for a lot of teams. He’s such a special piece for us that I think as the season goes on, he’s gonna keep getting better and better. And I can’t wait to see him at the end of the season, how good he is.”

In that vein, the second half served as a jolt back to reality, back down from cloud nine. Houstan and Diabate, talented as they may be, are still youthful and inexperienced.

Diabate didn’t score in the second half, his prowess neutralized. He finished with seven points. Houstan picked up a quick second foul, ending his first half prematurely. And, when he re-entered after halftime, he struggled, even as Howard drew up sets to try to get him back into the flow of the game.

“One thing about Caleb, this is a game of growth,” Howard said. “You know his heart, when you have foul trouble, man, you’re playing so well and then now you have to sit for a while and you just lose your rhythm.”

That first part — about basketball being a game of growth — is pertinent to this team. They’re teeming with talent, but also raw. Diabate didn’t start playing basketball until he was 12. Houstan, as Howard mentioned, could still be in high school. Frankie Collins, another freshman, missed time recently with a groin injury. Kobe Bufkin is one of the youngest freshmen in the country.

In many ways, last year’s Michigan team was an outlier. New pieces gelled right away, fitting seamlessly into a greater whole. Dickinson was as ready as a freshman can be.

In the second half, Buffalo having dwindled Michigan’s 21-point lead down to 6, the other side of the freshmen experience was clear. With seven minutes to play, Howard subbed out Houstan and Diabate in favor of Brandon Johns Jr. and Terrance Williams II, a pair of players with more experience and more defensive chops.

There are going to be speed bumps along the way. Everyone recognizes that.

“Turning into a good two-way player, it’s gonna take time,” Dickinson said of Houstan. “But for right now, he’s a really good offensive player and helps us out a lot.”

Diabate and Houstan are each self-deprecating. After Friday’s exhibition victory over Wayne State, Diabate graded himself a C+, even though he finished with 14 points, tied with Dickinson for a team-high.

And Houstan, who finished with 11 points?

“Caleb’s always listening, asking questions, wants to learn, wants to get better,” Howard said. “And I trust that he’s gonna make the right play, you know? Every player makes mistakes.”

In the end, Houstan proved Howard right. He confidently drilled a catch-and-shoot 3-pointer to put Michigan up 15, burying Buffalo once and for all with 3:09 to go.

It was his first basket of the second half, but an opportune one: just when he may have been forgotten, he offered yet another reminder of his boundless capabilities.

And when Houstan and Diabate can translate that potential consistently, well, banner raising celebrations are on the table.