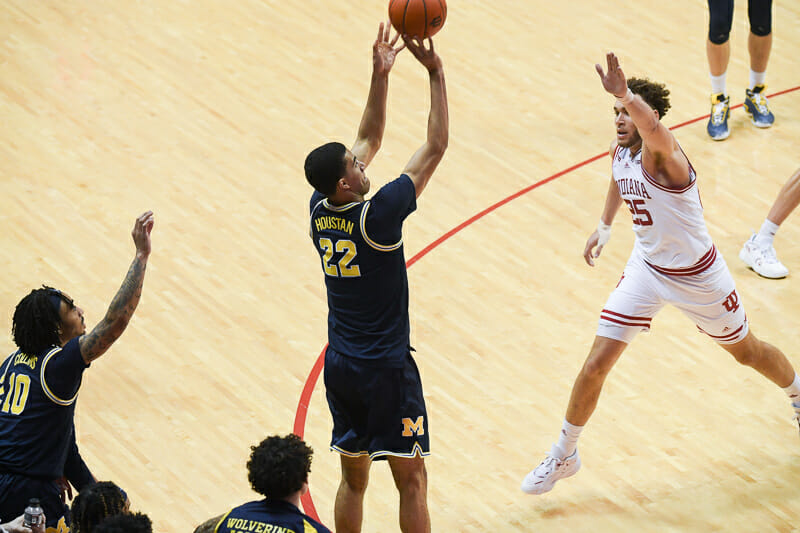 Less than five minutes into Sunday night’s game, Caleb Houstan lined up a 3-point shot in at the wing.

Indiana had committed to crowding the paint, tripling Moussa Diabate as he caught the call down low. The kick-out was inevitable. Caleb Houstan stayed ready.

As the ball went to the perimeter and swung to the open man, Houstan gathered the ball and hoisted it up. He stared at the ball until it went through the net, turned, and glanced at his teammates on the bench.

Moments later, after he nailed his second 3-point shot in the corner, he turned to the opposing bench and gave them a glance as well.

After hitting his fifth jumper of the night, Houstan had words to say. There wasn’t anyone around him, at least no opposing players. But these words weren’t aimed at others. They were aimed at himself — words to hype himself up based on his performance.

All afternoon, with each shot passing through the net, Houstan wanted to remind everyone — teammate, opponent, even himself — exactly what he was capable of. Compared to the start of the year, where he struggled to shoot the ball with consistency, he was different now. Against Indiana, he emphasized that sentiment.

“Seeing the ball go through the basket,” Michigan coach Juwan Howard said on what changed about Houstan. “But he’s always been rock solid, every time all the time he’ll come in to practice, getting his work in, watching film, learning the game, and then staying dial in mentally. And you know, it’s beautiful.”