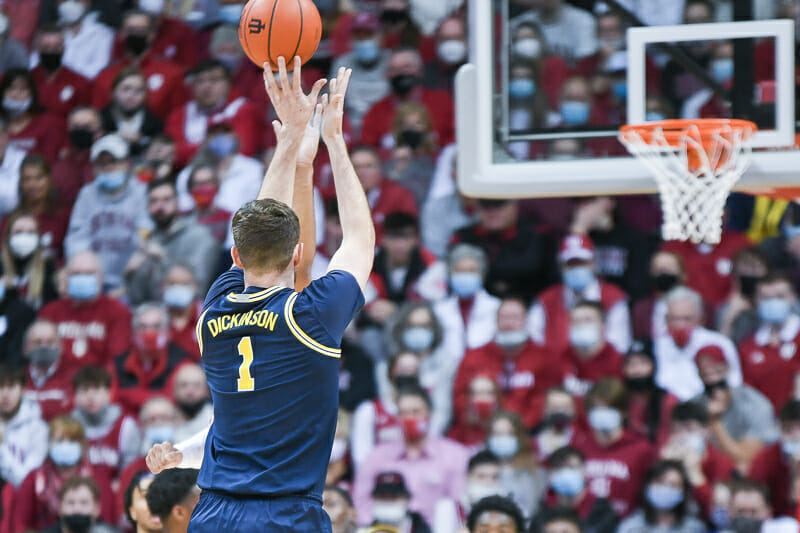 Michigan took the floor inside Assembly Hall Sunday afternoon with a prime opportunity to secure its best win of the year and spark a turnaround. As Hunter Dickinson conceded after the game, “we were playing for our season.”

After 40 grueling minutes, Michigan’s season is indeed alive and well, buoyed by a resounding 18-point victory over a white-hot Indiana team. Here are five takeaways from the win.

While Dickinson’s quote may have been a bit dramatic, his play certainly mimicked the urgency of the declaration. He led the way with a game-high 25 points, also chipping in nine rebounds and four assists, an all-around effort reflecting his commanding presence.

Dickinson’s ability to dominate the low-post has long been obvious, but the sophomore is, at last, transcending his game to another level. He spent the offseason crafting an outside jump shot to expand his repertoire; against the Hoosiers, Dickinson reaped the benefits. While Indiana consistently left him alone on the perimeter, Dickinson drilled a trio of opportune 3-pointers.

“I think people still aren’t respecting the jumper,” Dickinson said after the game, while Terrance Williams grabbed the stat sheet and marveled at Dickinson’s final line alongside him. “That’s fine. I’m cool with it.”

Dickinson instead deferred to his teammates, crediting the guards for drawing attention, luring Dickinson’s individual matchup towards the lane to create space.

“It’s a long close out for them,” Dickinson said. “I’m glad I’m able to capitalize off the good work that my teammates are doing.”