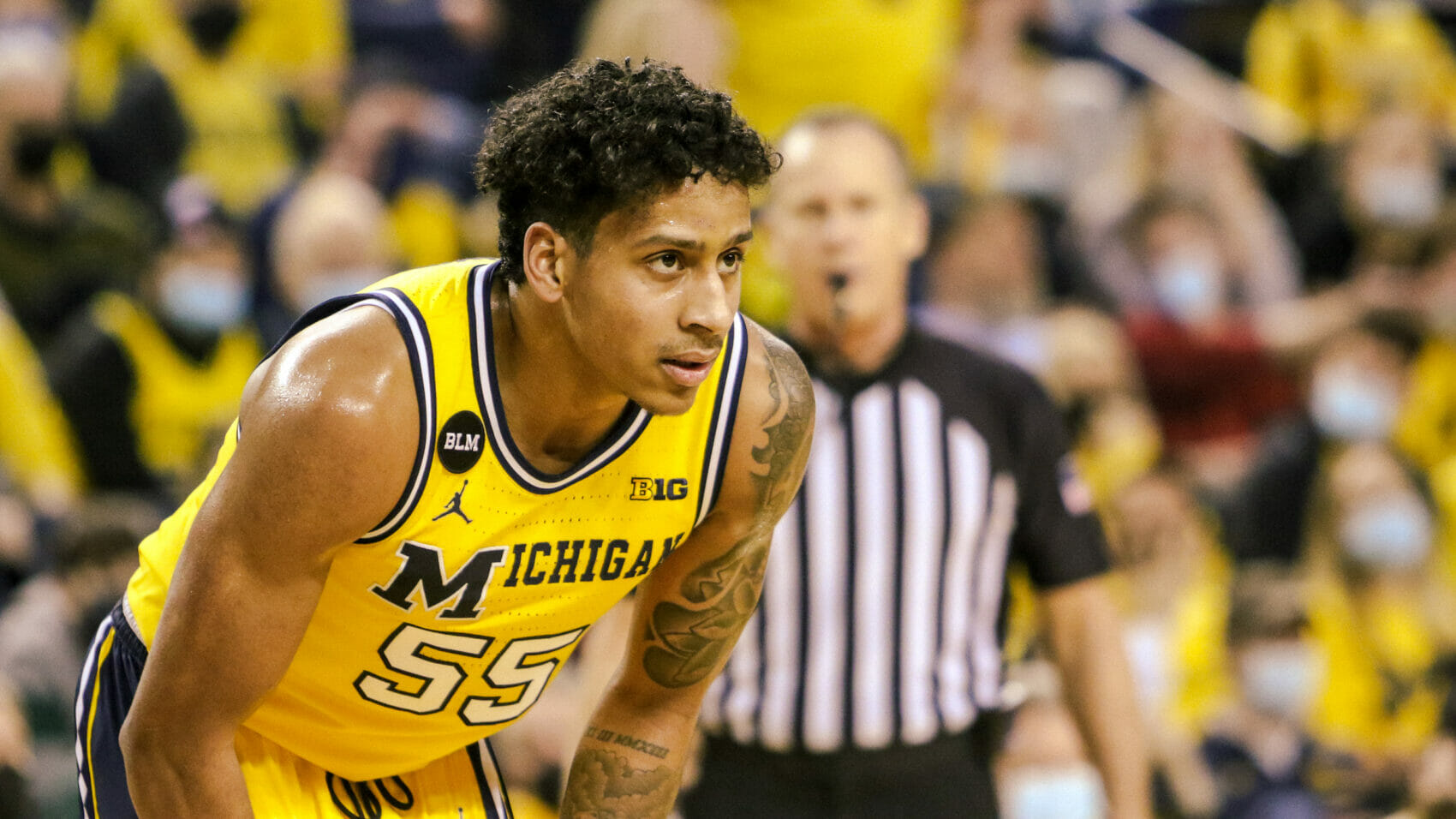 Juwan Howard, Eli Brooks, Hunter Dickinson and DeVante’ Jones were on the podium after Michigan’s Sweet 16 loss to Villanova.

Q. Hunter, you guys seemed to leave a lot of points at the rim tonight. Was there something they were doing, or it just wasn’t falling for you guys?

HUNTER DICKINSON: Yeah, I think it just wasn’t our night out there.

Q. For Eli, when the shots aren’t falling like that, close shots, deep shots, whatever, Hunter said it’s just not your night. Does that make you think that you were that close? They certainly looked like they were vulnerable at times, that you had your chances in this game. Do you feel that way?

ELI BROOKS: I mean, yeah. We lost by however much. We left a lot of points out there, like you guys said.

Q. For any of you, do you feel the offense ran the way you guys wanted it to as far as your pregame plan?

Q. Coach, Coach Wright said that one of the things they try to do is disrupt your timing a little bit because it’s so tough to stop Hunter once he gets the ball when he wants it. Do you think your timing was a little bit off based on what they did?

JUWAN HOWARD: Give Villanova credit. Very good team, well coached, played a very solid game, extremely competitive on both sides of the floor. We knew coming in that they were going to switch a lot, and we prepared for it. Hunter got the ball in some good spots.

Yes, some of the spots that he was pushed off the block, but overall we got some good looks at the basket. Unfortunately, it just didn’t go our way.

Q. For the players, I know it’s difficult immediately after, but if you wouldn’t mind assessing the season, there were highs and lows, but you guys get to the Sweet 16 and put up a good fight here.

ELI BROOKS: Just staying connected. Coach said it best in the locker room, battling adversity and staying together, that’s what brothers do, and that’s one of our core values of family. So I think we did a good job of sticking true to what Michigan basketball is all about this year and staying connected as one.

Q. Juwan, same question for you. What do you think your lasting memories of this season will be? What are you going to take away from the season?

JUWAN HOWARD: Great young men to be a part of their development. Learned a lot from them as far as how competitive they are. They’ve competed throughout the season from start to finish. A great group to coach, accepted learning, stayed connected by supporting each other. Some of their roles were different. No one wavered on the other end. Did an amazing job of buying into their roles.

I think with some of the injuries that we faced, with some of the COVID, every guy was able to go out there and compete and save our season. So you learned a lot from who we are. We always talk about Michigan being family, and I’ve seen that we’ve been the most connected group this year because of the fact that everyone has been supporting each other.

When I walk away from this season and I look back, I’m like no reason but to hold your head up high on how our team banded together competing throughout a tough Big Ten season and then leading into the NCAA Tournament. There were times when we were counted out. There were times when people didn’t feel we deserved to be here, and these guys rose to the occasion and proved they earned the right to be in the NCAA Tournament.

So hats off to my players and staff.

Q. Coach, even when the shots weren’t falling, you guys battled all night. You played tough defense. Is this one of the tougher, better defensive performances for you guys this year, do you think, especially considering the competition?

JUWAN HOWARD: We’ve been battling all season long. I would say this, this is why I’m so damn proud of our group. Everyone talks about the shooting from Villanova, whether it’s the three-point shooting, the attacks in the paint, but you look at the numbers, and they shot 37 percent from the field. They shot 30 percent from three. That says a lot about how hard they played defensively by dialing into the scouting report and making the players have to work for every bucket.

I don’t want that to not be mentioned and let them know that that’s how the game goes sometimes. It’s a very competitive game. You have a lot of talented young men that’s here on this stage. Every team that’s playing in the Sweet 16 is really, really good. So are they. Nothing have to do with me. It’s all about them.

Q. For DeVante’ and Hunter, because Eli already asked this question, it may or may not be the end of the road for you guys at Michigan, certainly this season. Can you sum up your feelings right now of what you’ve accomplished this season and in your careers?

DEVANTE’ JONES: For me, it was just an honor throughout the whole year just being able to play with a group of guys that’s so talented, especially with a great coaching staff, with Coach Juwan Howard and the rest of the guys did a great job. This an experience I’ll never forget.

Obviously, we didn’t get the outcome we wanted, but me, I’m just blessed to be in the position I’m in today. Through my three years at Coastal, I never made March Madness, and my first round here I made the Sweet 16. It was just an amazing experience for me. I don’t know what the future holds, but I’m just grateful I’m in this position with these guys.

We fought as hard as we could, and to be able to make the Sweet 16 and be one of the last 16 teams standing. We obviously didn’t reach our ultimate goal, but just proud of how we fought back and battled through adversity.

Q. Eli, can you kind of describe a little bit what this year was like for you off the court in terms of the role you played with the young guys and just kind of what was on your plate away from what people see in 40 minutes every night on the court?

ELI BROOKS: We had a young group that always wanted to learn. So it was awesome to be able to work with Frankie and Kobe. They’re one of the most like willing to get in the gym, like high basketball IQ. They ask me and DeVante’, just how do you do certain things?

Just being able to teach them, sitting in the locker room, Isaiah Barnes came up to me and said, I just appreciate you for everything that you did this season. So just seeing that really meant a lot that I have an impact on the younger freshmen and sophomores.

Q. This is for Juwan. Juwan, could you talk about what your two senior guards have meant to you in every way this season?

JUWAN HOWARD: They’ve been great all year. I thought having two seniors in your backcourt being two leaders that can help lead our team, they were stars throughout the year.

So we used the word serving. So like our senior guards were some of the best leaders that you can find. Looking at starting with D.J., this is only one year with him, but D.J. has accepted his role, learned a lot from this team and how the Michigan culture and everything I sold them on when I recruited them, being honest, but then also he saw how it developed.

Then Eli, who I’ve coached for three years, he’s as rock solid as they come. One of my favorite guys to coach — I’ve had so many favorites. Typically, you don’t usually have a favorite, but this young man has been special not only for the players, but also for the staff because he’s an extension of the staff and he does an amazing job on the floor, not just competing, but also leading.

I’ve always said this before, and I’ll say it in front of him, if you ever want to coach, if I’m still coaching, you have a job with me, young fella. That’s how much I trust him. That’s how much he’s shown how smart he is in knowing the game inside and outside. I don’t know if many of you notice or not, but he taught himself how to golf, and he’s one of the best golfers there is. So you see him on the court playing well, but he’s also a great golfer. That shows you how his mind is wired.

But overall, they were special throughout the year. D.J. with his health, he’s battled and battled. He’s one of the toughest guys I’ve ever been around.

THE MODERATOR: Thank you, Michigan. Appreciate your time.

JUWAN HOWARD: Thank you. Thanks for having us. Go Blue.