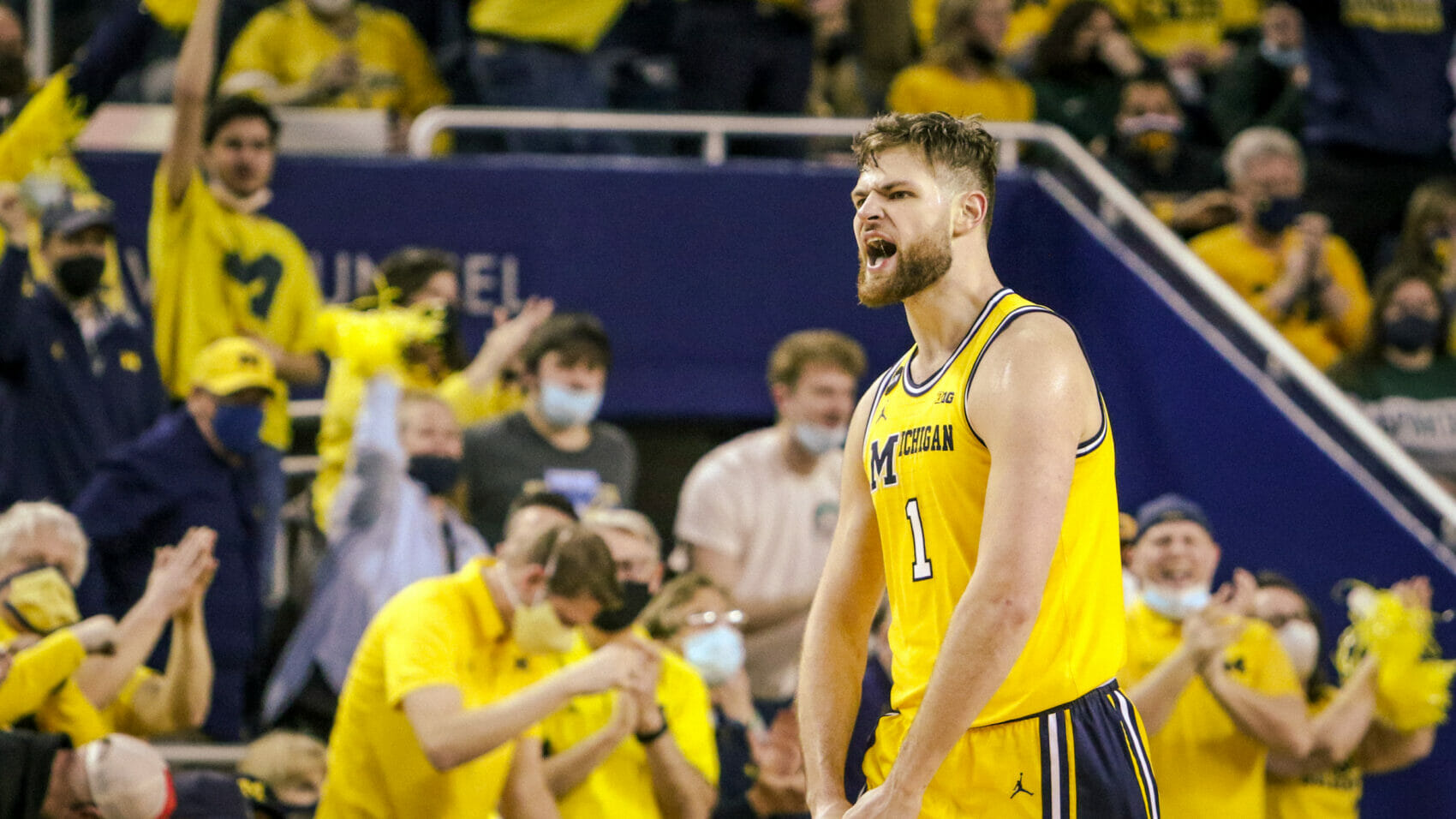 Dickinson highlighted the evening as he was named U-M’s Bill Buntin Most Valuable Player; he also earned the Rudy Tomjanovich Most Improved Player Award and the Loy Vaught Rebounding Award.

For a second straight season, Dickinson led the Maize and Blue in scoring (18.6 points per game) and rebounding (8.6 rebounds per game) as he became the fourth Wolverine to record multiple seasons as U-M’s leader in both scoring and rebounding (Tomjanovich, 3x; Roy Tarpley, 3x; LaVell Blanchard, 4x).

An All-Big Ten second team selection, Dickinson posted a team-best 15 20-plus point games, including a career-best 33 points against Michigan State (March 1). He added in 12 games of 10-plus rebounds, including tying a career-best with 15 twice: at Penn State (Feb. 8) and vs. Villanova (March 24). Dickinson tallied 11 double-doubles, including five in the last seven games of the season.

Leaving Ann Arbor as the all-time leader in games played (159) and career wins (124), Brooks used the COVID-19 extra year of eligibility to average a career-best 12.8 points and 3.7 rebounds while playing a team-best 35.9 minutes per game. He made a career-high 56 three-pointers and swiped a career-best 40 steals. During his final season, he became the 56th Wolverine to reach 1,000 points as he closed with 1,157.

Brooks helped the Wolverines to a Big Ten regular season title (2021), a Big Ten Tournament title (2018), an NCAA Final Four appearance (2018) and a national title game appearance as well as three straight trips to the Sweet 16 (2020 was canceled due to COVID-19).

Coming off the bench for 15.5 minutes per game, sophomore forward Terrance Williams II was named U-M’s Sixth Man of the Year. He averaged a career-best 4.7 points on the season and drained 20 three-pointers after he made just one as a freshman. Instrumental in key late season wins at Ohio State and vs. Tennessee, Williams pulled in a career-best 73 rebounds (2.4 rpg), including 20 on the offensive end.

Graduate guard DeVante’ Jones was given the Gary Grant Award for Most Assists. Adding to his 10.3 points and 4.5 rebounds per game, Jones led U-M with 151 assists (4.6 apg). With 15 games of 5-plus assists, he twice tied his career-best of 10, first in an upset win over No. 3 Purdue and then against Illinois.

Sophomore guard Jace Howard and freshman forward Moussa Diabate shared the Steve Grote Hustle Award, while senior guard Adrien Nunez was the recipient of the Travis Conlan Sportsmanship Award. For his work in the classroom, freshman Frankie Collins was given the Morgan/Bodnar Brothers Award for Academic Achievement.

The Wolverines closed the 2021-22 season with a 19-15 overall record and an 11-9 record in Big Ten Conference play, marking U-M’s seventh straight season with 10-plus conference victories. Earning the No. 11 seed in the South Region of the NCAA Tournament, Michigan advanced to the Sweet 16 for the fifth straight year following opening weekend wins over No. 6 Colorado State and No. 3 Tennessee. Michigan is one of just two programs, along with Gonzaga (seven straight), to reach the last five-straight Sweet 16s.