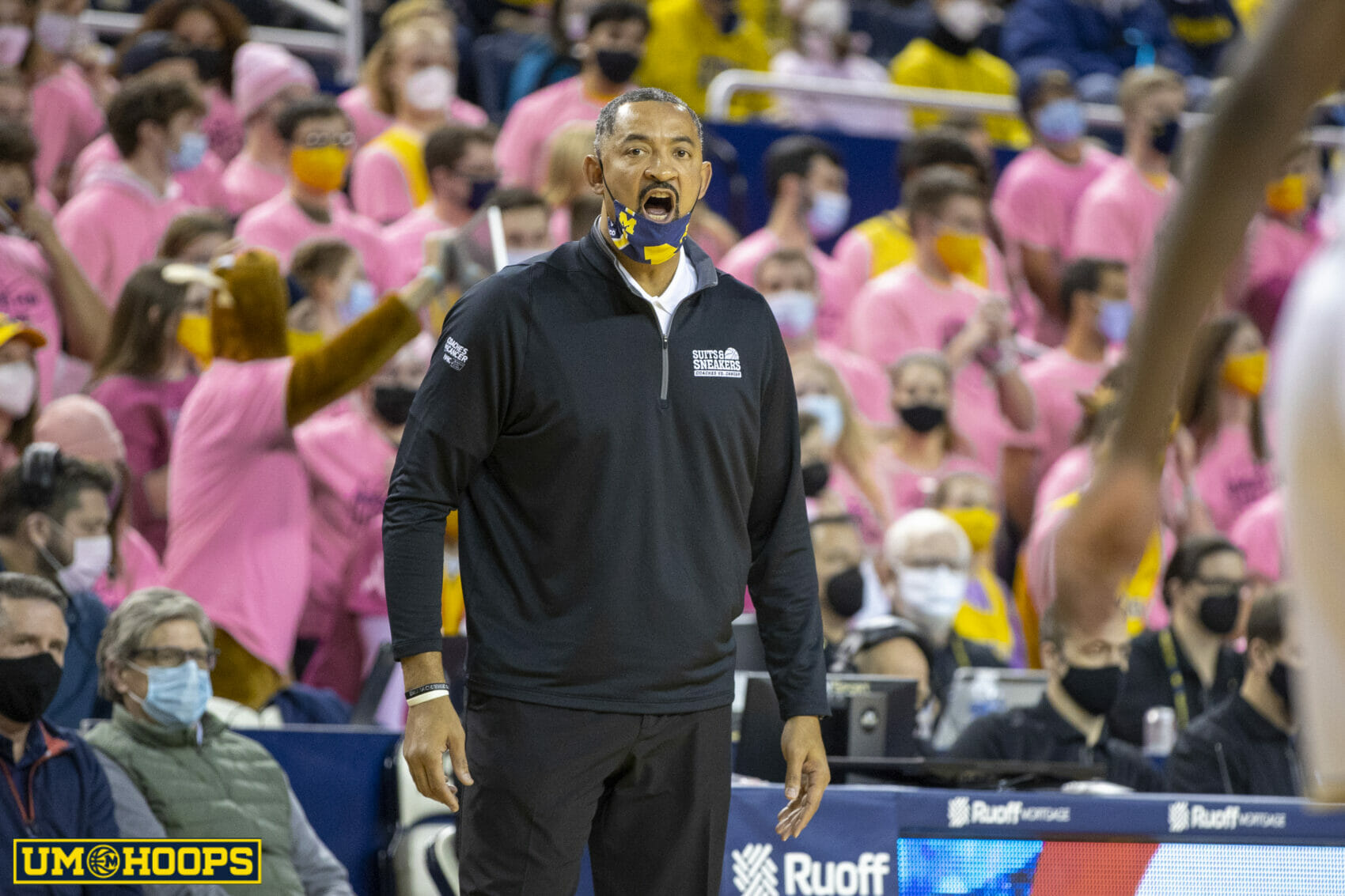 Juwan Howard was on the podium this morning in Minneapolis as part of Big Ten Media Days 2022. Here’s what the Wolverine head coach had to say.

KEVIN WARREN: Before I welcome the next head basketball coach to the podium, I’d like to take a moment and send a special prayer to assistant football coach at the University of Michigan, Mike Hart, who had a medical condition this weekend. Coach Hart is back in Ann Arbor. I want him to know that even though this is Basketball Media Days, we’re a Big Ten family, we’re all praying for him and wishing him a speedy recovery and thank him for all he’s done as a student-athlete in the Big Ten and what he’s doing now to make his student-athletes special.

The next coach to the podium is Juwan Howard. He had an unbelievable NBA career. But what he’s done outside of basketball is probably even more impressive. He created the Juwan Howard Foundation, which really focuses on at-risk inner city young people by organizing clothing drives, donating funds to youth-oriented groups, including an adoption agency, a youth home and the Boys & Girls Clubs.

What’s so impressive is this foundation has helped support the placement of over 50 abandoned children into permanent homes. He and his wife also started the Juice Foundation, which pinpoints a healthy lifestyle to the essential key of beating cancer and raising awareness for cancer education.

So with that, the head basketball coach at the University of Michigan, Juwan Howard.

JUWAN HOWARD: This is the first podium they made for a tall person (smiling).

Good morning, everyone. Just like to open it up for any questions.

Q. At least four times this season the Big Ten will have both coaches on the sidelines as head coaches that are Black. Can you talk about the significance of that. Also, are we moving towards that being more of a rule than an exception?

JUWAN HOWARD: I’m sorry, can you repeat the first part of your question.

Q. Basically you’re going to have four games this season that Black coaches will be on both sidelines in the Big Ten.

JUWAN HOWARD: Got it.

Q. Is that becoming more of a rule than an exception? How significant is that, in your opinion?

JUWAN HOWARD: Well, first I will start by saying it’s nice to see that there’s growth within our league. Being a part of the Big Ten Conference, which in my opinion is the best conference in college basketball, with the level of coaching, great coaching, also some of the best talented young men, then now to see how the league has grown so much when it comes to diversity, adding two that I’m very familiar with in Mike Woodson as well as Coach Shrewsberry, on the NBA level of getting an opportunity to coach against them and also play against one of Coach Woodson’s teams when he was with the Atlanta Hawks, seeing how his teams have always been one of the most competitive teams.

Now he’s transitioned into Indiana, his alma mater. You can see how his team has grown so much and they’re one of the best teams in the Big Ten, because they’ve taken on the identity of the coach.

Coach Shrewsberry, who was with the Boston Celtics, what success he’s had with that team, then he also moved on to Purdue, been with Coach Painter, learned with him, worked with him.

Now he’s taking on the program of Penn State. Seeing the success they’ve had with his identity, his makeup, the work he’s put in, our league is getting stronger and stronger.

Then you add a guy by the name of Ben Johnson, who is coaching his alma mater, like myself, the league has grown in so many ways. It’s just great to see I’m a part of the best conference in college basketball.

Q. Have you thought about at all your program and Kim’s program becoming one of the best kind of basketball tandems in the country?

JUWAN HOWARD: Well, I’ll say this. Getting an opportunity to watch Coach Kim, her staff, how they’ve grown their program, all the teaching, all the trust that those young women have in her staff, just seeing the success has taken off since the time I arrived at the University of Michigan, I’m not surprised.

I’ve gotten an opportunity to watch their practices, learn from her. That’s the thing, too, like having a growth mindset of seeing how I can grow with my staff and prepare my players, it’s just nice to see that the gold blue nation, that maize and blue is having success on the court, on the field.

Also let me add, in the classroom. Both programs have done well with leading our young men and women, knowing that we keep the main thing the main thing, the academics as well as athletics being first.

Q. I know you have used the transfer portal heavily at point guard, Mike Smith, DeVante’ last year, Jaelin this year from Princeton. What have you learned from going through that process year after year, and where Jaelin is in his development process?

JUWAN HOWARD: When you first start off as a head coach and you have a guy by the name of Zavier Simpson, he’s a coach’s dream, a young man that is extremely competitive, smart, a great leader.

He helped my transition as a first-year coach to be so smooth with how he’s been able to have his teammates rally behind my message, being all in and bought into the message and the teaching.

Let’s call it what it is, he was with Coach Beilein, who had a lot of success with the program, now you have a new coach with a different style and Zavier Simpson. And Zavier Simpson now move on, then you’re like, Okay, what’s next?

With that, we brought in, like you mentioned, Mike Smith. Mike Smith during COVID, we didn’t get a chance to go out and do a lot of recruiting, so it was important for me, Okay, which are the guys that I think will fit our culture? Mike was with Columbia. Had a lot of success in the Ivy League Conference. Doesn’t always necessarily mean it will translate into the Big Ten because it’s a different level of play. Everyone talks about Power Five, how different the skill level is.

Give Mike credit with how he goes out and how he approaches his day as far as working and growing as a player. Also his IQ, his transition was easy.

Now, Mike was our starting guard. He led us to a Big Ten championship as well as the Elite Eight, one possession away from the Final Four. Now he moves on to play professionally.

With that, we brought in DeVante’. It seems like there’s a trend with the program. But it’s all about the timing of how it all works as far as what we needed at that position, then the scholarships that we have available.

Jaelin has been great for us so far. I love the fact of how he’s been a leader, it is way how he leads. Sometimes it can be vocally as well as soft spoken by his actions.

He’s also been able to transition into our system, the way how he’s able to read different situations. When the guys are not bringing it with their energy and effort in practice, which we haven’t had a lot of that, but he’s been able to speak, not afraid to have those uncomfortable moments. That’s a sign of leadership that we always enjoy having.

I’m sure every coach that you talk to, when you have a player-led type of team, then that makes our job a lot easier as a coach.