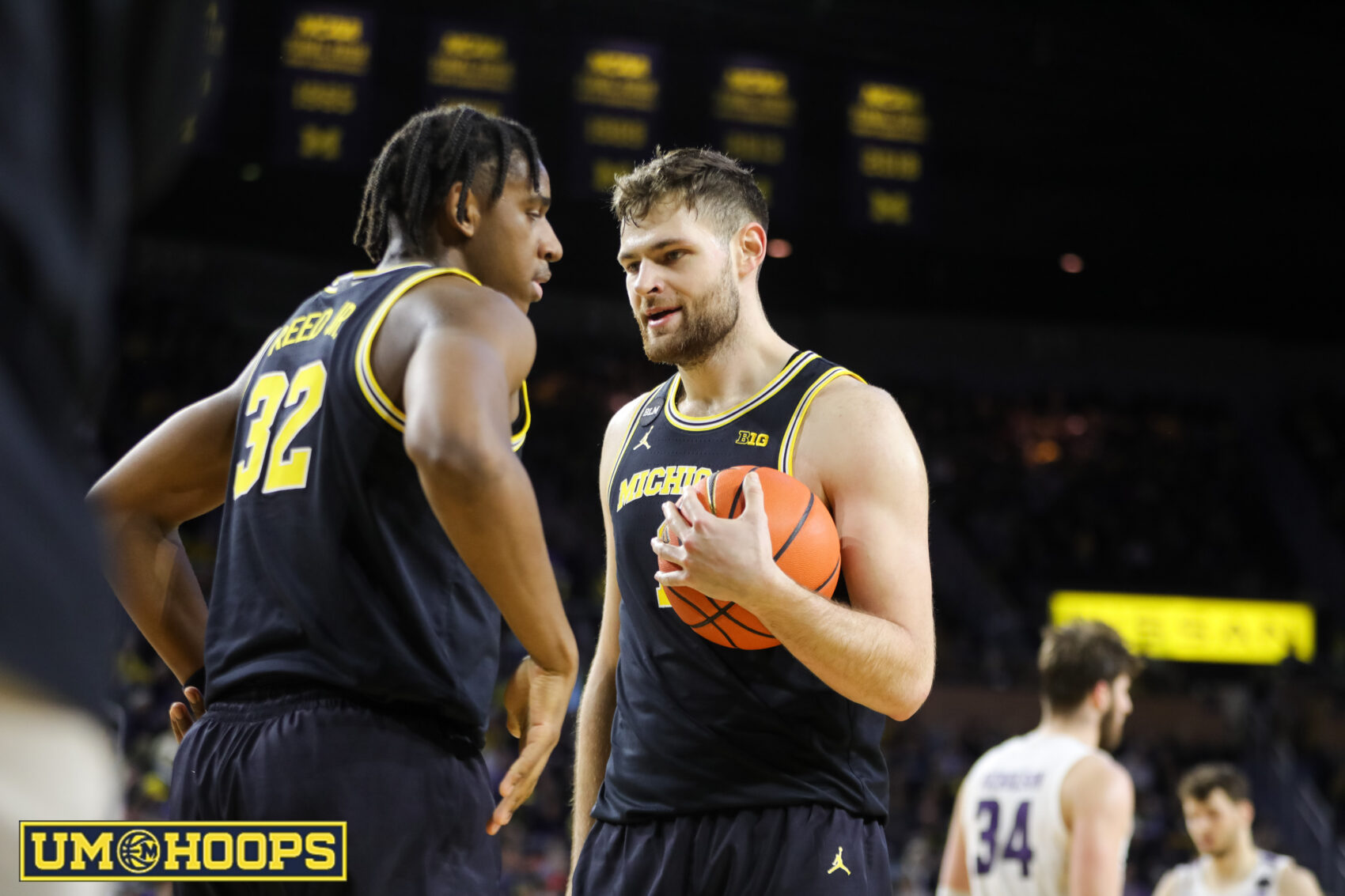 So when Hunter Dickinson re-entered the game with 9:50 to play and the Wolverines trailing by one, Reed assumed he was destined for the bench.

Indeed it was. With Dickinson and Reed co-starring, Michigan ripped off an immediate 10-0 run to seize control of the game. The pair shared the floor until Reed checked out in the game’s waning stages because of his poor foul shooting; Michigan outscored Northwestern, 19-9, over that stretch.

“It was a big game-changer for us in the second half, especially on the defensive end,” Juwan Howard said.

The two-big look isn’t exactly novice. Saturday, Phil Martelli revealed that Michigan practiced using the lineup during its trip to Europe over the summer. Recently, with the team still tinkering with its rotation, Juwan Howard and Jay Smith came up with the idea to bring the look back, starting Thursday against Iowa.

The idea was that Reed — with his size and length — could disrupt Iowa’s prolific scorer, Kris Murray. Sure enough, he played well, notching seven rebounds, a steal and a block in 20 active minutes.

But for Reed, it was all a blur.

“Last time I was out there lost, didn’t know what to do,” he said. “The plays helped today. (Hunter) catches the ball, I’m cutting, right there at the rim for a layup. That helps Hunt. He’s able to space out, shoot the three ball, shoot the midrange, attack off the dribble. It’s really the best of both worlds.

Sunday, Reed and Dickinson looked more comfortable together. After Northwestern secured four offensive rebounds before the under-16 timeout in the second half, Michigan’s two big men turned the tide; they had three offensive rebounds in the Wolverines’ 10-0 run.

Dickinson — whom Juawn Howard said has embraced playing alongside Reed — found his groove after a quiet first half. He notched five points in the 10-0 run and finished with a season-high 15 rebounds.

Reed, meanwhile, scored all six of his points in the second half, including throwing down a thunderous alley-oop from Dug McDaniel. He credited the two-big lineup for providing him added structure.

Dickinson is used to the two-big lineup, having shared the floor with Moussa Diabate for much of last season. Reed, then, has leaned on Dickinson as he acclimates to the new look.

“Tarris, he’s starting to get his feet wet,” Howard said. “When you’re young in this league, it’s a learning curve. There’s a lot of learning that happens with the game of basketball, and Tarris has embraced it.”

Howard lauded Reed for “investing in himself,” praising his habits in the weight room, his diet, and the one-on-one work between coach and player. When asked about Dickinson’s impact, Reed shook his head up and down vigorously.

“I can see it in myself every day,” Reed said. “Day by day, I’m getting better by having to guard him. He’s such a skilled big. His touch around the rim is elite. Every day, I’m following him, picking his brain. We’re talking on the court, I’m telling him what I see, he’s telling me what he sees.”

That mentorship pays off when the pair share the floor. Saturday, Martelli maintained that the lineup is still mostly situational. That rang true Sunday, when Reed and Dickinson took the floor at separate times in the first half.

That opened the door for Dickinson and Reed, take two.

Collins mentioned that he tried to adjust, countering by deploying a smaller lineup than usual to create mismatches. Sure enough, Howard persisted with the two-big look and it worked, helping capture a critical Big Ten win.

“It was definitely a spark,” Reed said. “When I come into the game and I’m playing with Hunt, it’s gonna be a lot to take, especially in the paint. Too much for a team to handle.”