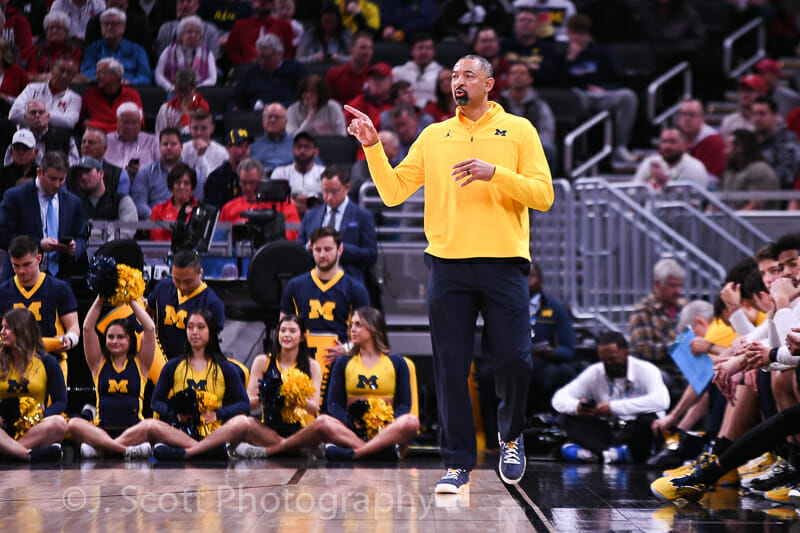 Michigan blew a 17-point second-half lead and lost to Indiana in the Big Ten Tournament on Thursday afternoon in Indianapolis.

Coach Howard, if you could start with an opening statements, and then we’ll take questions for the students.

COACH JUWAN HOWARD: First, I want to start by congratulating Indiana. Their coaches, their players, for coming out and giving a very competitive game. They earned this victory for them. We fought hard from start to finish. There was a lot of teaching moments during that time. Unfortunately, for us down the stretch — excuse me. The second half, in the second half for us, it didn’t go in our favor. Unfortunately, we had some defensive breakdowns, but those all are teaching moments that we will learn and grow.

Q. Hunter, you got a lot of good looks, got the ball down low a lot in the first half, but it seemed a lot of that went away in the second half. Were they doing anything differently that made you less able to get to a good position there in the second half?

HUNTER DICKINSON: Yeah, they were a little more physical with me in the second half, for sure. I just should have did a better job of, I guess, getting low and really establishing position down there.

Q. Hunter, when a guy like Trayce gets going in the second half, what are the things that make him capable of having a big half like he had today?

HUNTER DICKINSON: He’s a good player, really athletic, really skilled around the rim, and so when he gets it close to the basket in those positions like he did, it’s easy for a really good player like him to score like that.

Q. DeVante, things were going so well for you guys until the wheels kind of came off there with about 11 minutes left. As the point guard, what were you seeing especially offensively that caused some of those problems?

DEVANTE JONES: Like Hunter said, they just came out being for physical than us. They brought more energy, more effort in the second half. On defense there were multiple breakdowns that just hurt us, offense as well. So credit to Indiana.

Q. For either of you, the end of the season had some games without your coach on the sidelines. What was the thing you noticed the most, kind of, with him back on the sidelines that was different in the game today?

HUNTER DICKINSON: We were just happy to have our leader back.

DEVANTE JONES: Yeah, we felt the energy when he was back. You could see in the first half we came out with a lot of energy, we got our coach back. So I’m just, you know, myself, I’m mad that we didn’t get the W for him.

Q. They went to a smaller, more mobile athletic lineup in the second half and you guys turned it over 10 times. Was that the reason why, because of their different personnel?

DEVANTE JONES: Like I said, they came out playing more physical, they had more effort than us in the second half. I take a lot of that blame for the turnovers that I had, a lot of costly turnovers that I usually don’t make. So I just put that on myself.

DEVANTE JONES: Just him making shots, his ability to make shots. He’s just difficult, you know, just trying to go under. He’d knock a three down, or he’d go over. He’d be aggressive to the basket. He just definitely brought a lot of energy. When he came back in the game, the energy picked up a lot. So I think he just brought energy.

Q. Hunter and DeVante, I would love for you to each give an answer on this. Just kind of what the mood of the team is, where you guys feel like you are from a chemistry standpoint heading in now to the NCAA Tournament?

DEVANTE JONES: Well, we definitely, we not happy with results. We feel like we had this game. We was up a lot and we let it slip away. We definitely mad about that. But I feel like we still together as a team. We always going to have each other’s back no matter what. We’re going to get back home, get back to work, see how we can get better as a team and see what happens Sunday.

HUNTER DICKINSON: Yeah, I think just probably disappointed in how we came out in the second half. We had high aspirations coming into the weekend. And so for us to fall short so early, I was definitely disappointed for us. But this gives us an opportunity to come together for this next week or so until we have to play again.

Q. Coach, circling back to Xavier Johnson. He didn’t really play much in that first half because he had foul trouble. What all did he kind of change in terms of the calculus when he was back in there in the second half?

COACH JUWAN HOWARD: Well, his energy truly helped the team in a lot of ways on both sides of the ball, whether on defensive end he was, you know, up being active, aggressive, trying to be disruptive as much as possible, which give him credit he was effective with that.

Offensively, like you heard from one of our players, he did a really good job of reading the defense, where he was picking his spots, when there was tasks when guys were on the screens, he took the shot, when there was opportunities where he could get in the paint, whether he was trying to make a layup, if that wasn’t open, he was throwing a lot to Trayce. And with those two, any type of ball screen action, it’s like we practiced, it’s like we talked about, it’s like we watched on film, they’re extremely effective.

COACH JUWAN HOWARD: Well, it came to the second half for us at 11:02 mark. The game was changed with their aggressiveness, and they came out early in the second half, which we talked about at halftime, knowing and expecting that this team was going to, first, not quit. But secondly, of course, be more aggressive, whether they were trying to score in the paint, we talked about taking away the drive, or they were trying to shoot open shots, talked about contesting every shot without fouling.

But give Trayce, give the Coach credit, they were able to get some opportunities where he can score. I thought at times we were not as aggressive enough defensively where we could have taken away some of those easy buckets by him. And also in the second half, our turnovers, every time we turned the ball over, they got opportunities to score off that.

Second half, defensive breakdown allowed the team to shoot 55.6 percent, when we held them to 37.9 percent in the first half. Those are teachable moments where we’ll go back as a team, regroup, watch a film and take accountability of it.

Q. Coach, you obviously know big man played incredibly well. What did you see from Trayce Jackson-Davis in the second half, and what is it about him that gives him the capability of turning in such an impactful performance?

COACH JUWAN HOWARD: Well, I watched him, and this is now my third year and being coached against him and seeing his growth says a lot about the young man and also about his willingness to improve each year, but it also says a lot about him from a second half standpoint.

First half he wasn’t as active and wasn’t getting the scoring opportunities that he probably wanted. Plus give credit to our guys defensively, they were fighting, clawing, making everything tough for him.

Like I said before, when they were on that run, that’s when I felt our guys sort of like, you know, it was more a little doubt with our guys. And then as far as with that run, it took away that defensive disposition that we had prior to the run.

Q. Coach, you mentioned a lot of the teachable moments from that second half. What about for yourself from a coaching standpoint, what do you think you can learn and grow from as well?

COACH JUWAN HOWARD: Oh, yeah, you know, first one starts with teachable moments. And I wasn’t direct earlier, but it starts with me. I take full accountability. I’m never the one that’s going to deflect or point the finger. It starts with me here, going back and as we take — whether it’s tonight, I’m sure it’s going to be tonight. I’m going to watch film and there’s going to be a lot of sleeping moments where I have a lot of disturbance in my sleep because I’m going to be playing every play, after every play on how I could have done better and putting them in a position, what I could have done better to secure this victory for us. What did I do wrong, you know, I’m going to look at myself in the mirror first.

Q. This kind of goes off of that question as well, but you were so emotional yesterday in your press conference being able to come back to your team, and then the first half today, followed by the second. How are you feeling after kind of the up and down of everything that you’ve gone through?

COACH JUWAN HOWARD: You know, I appreciate you asking that question. I’m human, I have feelings, I care. I would not stop caring. It’s been an emotional ride. Did I get sleep last night? No. But I love teaching, I love coaching, I love being here, I miss being with my guys.

Yesterday I got an opportunity to sit in front of the media and see some familiar faces that I hadn’t seen in two weeks. And I thought that was great, just to be back and enjoy and take all those questions and get that connection back.

But now, it’s roll up our sleeves, stay dialed into the competition and continue to grow as a coach and also as a person.

Q. Kind of going off that, you always say next game, you’re one-game-at-a-time kind of Coach, you don’t know when or where your next game will be. I guess how do you feel about your chances of playing in the NCAA Tournament?

COACH JUWAN HOWARD: Well, I’m not in charge of the selection committee, but I would say this, our guys put themselves in the position to have an opportunity. And I’m going to pray, prayer warriors are going to be open. I’m going to wait on Sunday with my players and see where the chips fall at the end.

But at the end of the day, you know, whatever is decided, I’m still proud of how this team, coaches, the Michigan family has been together. And we talk about family, we don’t use that word loosely. But our family was challenged throughout the year, and I love how we have been able to stay connected through those times.