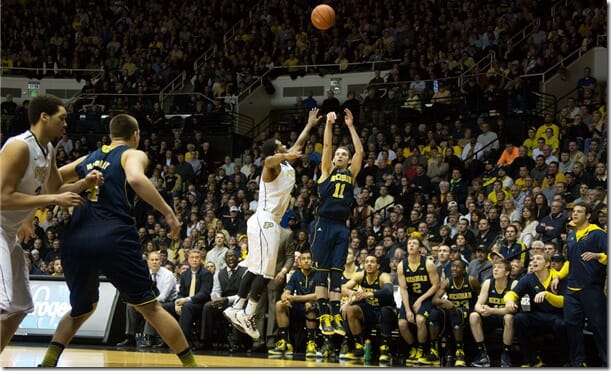 Michigan will play for a share of the Big Ten Championship on Sunday and Trey Burke wouldn’t have it any other way.

Trailing Purdue by 12 points with 12 minutes to play, it appeared that Michigan’s regular season dreams had been dashed once and for all. The Boilermakers were controlling the game, stymieing Michigan’s patented ball screen offense, and looking to close their rebuilding season on a high note.

Burke had just five points and appeared frustrated as he sat on the bench while Purdue took its largest lead of the game. Then Burke returned to the floor and for the second time in as many games simply willed the Wolverines to victory.

It started with a three pointer off of the dribble and a jump shot in the lane but that was only the beginning. Burke unleashed his full repertoire of offensive moves – dishes for open threes, drop off passes, mid-range jumpers in transition, and everything in between – over the game’s final 11 minutes. When the smoke cleared, Michigan’s point guard had facilitated a 40-23 run and allowed Michigan to escape with a coveted road victory.

Having (arguably) the best player in the country is a great luxury but it masks a lot of flaws. Michigan’s defense was still bad and for long stretches of the game its offense wasn’t much better. The Wolverines won thanks to Burke’s heroic contributions and timely production from Nik Stauskas and Tim Hardaway Jr. down the stretch but this wasn’t a great performance.

The offensive performance in the first half was marred by dreadful finishing around the basket. Michigan missed at least 10 opportunities at the rim and shot just 35% on twos in the first half – a far cry from its Big Ten leading 53% two point shooting. The Wolverines corrected those woes in the second, finishing an impressive 60 percent of their twos. Michigan survived the early shooting woes because it got to the free throw line often (29 FTA to 59 FGA) and valued the basketball (7% turnover rate). The Wolverines’ productive offensive rebounding from earlier this season has all but disappeared lately and for the seventh time in nine games, Michigan rebounded fewer than 30% of its misses.

That perfect offense down the stretch also disguised the fact that Michigan had no one that was capable of staying in front of Terone Johnson, who finished with 32 points on 12-of-17 shooting. Michigan’s defense surrendered over a point per possession – 1.09 points per trip – for the sixth time in its last nine Big Ten games. Purdue controlled the offensive glass, rebounding 38% of its misses for 12 second chance points.The Boilermakers turned the ball over six times in their first 17 offensive possessions and managed just nine points over that stretch. But once Purdue cut back on turnovers, just seven over the final 52 possessions of play, its offense began to flow. The Boilermakers scored 68 points on their final 52 possessions – 1.31 points per trip.

It doesn’t look like Michigan is playing Big Ten Championship quality basketball but for the second consecutive year the Wolverines enter the final Sunday of league play with a chance. This time around Michigan controls its own destiny, beat Indiana at home and share the crown.