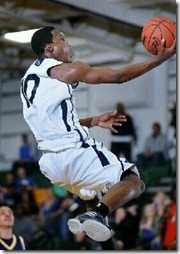 Irvin, a 2013 Michigan commit, was named the presitigious six man “core” Indiana junior all-star team. The “core” squad plays in both highly publicized scrimmages against the Indiana senior team that will eventually face off against Kentucky.

While discussing All-Star snub of Purdue-bound Bryson Scott, the Indy Star’s Kyle Neddenriep noted that he feels Irvin is one of the top two juniors in the Hoosier state:

My first thought: He should have made it. Six players are named to the core team and it’s pretty clear in my mind that’s he’s one of the six best players in the junior class. I’d rate him or Hamilton Southeastern’s Zak Irvin as the top in-state prospect currently in the 2013 class. Plus, Scott has led his team to the regional each of the last two years and he averaged more than 25 points a game as a sophomore.

The dates of the scrimmages have yet to be announced but a strong performance in both events could be the launch pad for a 2013 Mr. Basketball campaign for the Hamilton Southeastern wing guard.

Spike Albrecht on the Radar

Another potential guard option is Spike Albrecht. Albrecht is an Indiana native who played his high school ball at Crown Point, and AAU ball with SYF, before transferring for a prep school year at Northfield Mount Hermon. He averaged nine points and seven assists per game in the prestigious NEPSAC AAA league this season.

ESPN was impressed earlier this March as Albrecht led NMH to the NEPSAC AAA Championship and eventually earned MVP:

Here’s some footage of Albrecht from his prep and senior seasons:

Nick Baumgardner first reported that Derrick Walton will be playing in Germany from April 7th through April 14th as part of the Albert Schweitzer Tournament. Walton will be playing alongside former Lansing native and Michigan Mustangs teammate, Steven Haney, as well as Indiana bound Colin Hartman among oithers.

The full Team USA roster can be found here.

Dominic Woodson is one name that has been on Michigan’s 2013 radar throughout the prep season and the Texas transplant is already producing back home in Texas on the AAU circuit. Woodson will play with Texas Pro in the EYBL and the Ray Jackson Shooting Stars in other AAU action. Here’s footage of the 6-foot-9 255 pound big man in action: