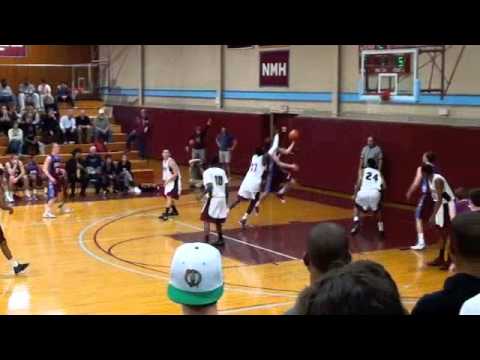 On Thursday, 2012 point guard Spike Albrecht of Northfield Mount Hermon (Mass.) will visit Michigan and coach John Beilein. If all goes well, there’s a good chance Albrecht will be returning not long after to begin workouts as a freshman guard for the Wolverines. We caught up with the point guard’s coach to discuss his recruitment and upcoming visit.

According to John Carroll, the head coach at Northfield Mount Hermon, Beilein will offer Albrecht following the visit.

“That’s the expectation, for sure,” Carroll said in a phone interview with umhoops.com earlier this evening.

Though it will be Albrecht’s first time in Ann Arbor, it certainly won’t be the first time he and Beilein have met.

All in all, Beilein has seen Albrecht, a 6-foot-1, 180-pound point guard, play in eight games either live or on tape — and he’s liked what he’s seen.

“(The Michigan coaches) are really excited about Spike,” Carroll said. “We run a very similar offense to Michigan, and Spike is a wizard at it. It’s not hard to see where he would fit with Michigan. He is really good at dribble penetration and finding open shooters, and (Beilein and assistant coach Jeff Meyer) just love the way he plays.”

Carroll said that in an hour and a half workout featuring 18 future Division I players, Albrecht had just one turnover and “probably 20 or 25 assists.”

Beilein was there to see it.

Albrecht, who attends NMH but is from Crown Point, IN, seemingly came out of nowhere on the recruiting trails about a month ago. After a strong showing in the NEPSAC AAA playoffs, Albrecht began to turn a few heads.

But Michigan was there recruiting him before most — even before Albrecht and NMH knocked off Brewster Academy, Mitch McGary’s school, in the semifinals. Given the circumstances, it’s not too surprising.

According to Carroll, Albrecht and former Michigan guard Zack Novak “go way back, they’re family friends” and they text each other often. Albrecht played in the same conference as Novak in high school. Albrecht also played on the same AAU team as commits McGary and Glenn Robinson III.

“They’ve known each other for a long time, and they know each other pretty well,” Carroll said of Albrecht’s relationship with McGary and Robinson.

All in all, according to Carroll, Albrecht’s choice has been narrowed down to Appalachian State and Michigan. That’s not to say he hasn’t had other interest.

Carroll is about as positive as one can be that Albrecht would fit in without a hitch at Michigan.

“(The coaching staff) connected with Spike and his family off the court, and it makes 100 percent sense on the court,” Caroll said. “There really wasn’t anything that didn’t click.”

Several times, Carroll mentioned the character and high class of Beilein as very important in Albrecht’s recruitment process. He said that’s something Albrecht is looking for in a coaching staff because that’s how he wants to be as a player.

Beilein and his staff will surely hope that thought continues when Albrecht visits on Thursday. The big question will now be, if Beilein does offer, will Albrecht accept?