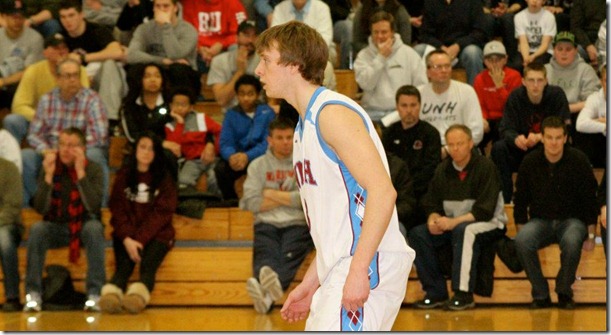 Michigan didn’t wait long to add a point guard to the roster after the news broke that, barring a change of heart, Trey Burke was likely headed to the NBA. Northfield Mount Hermon (Mass.) point guard Spike Albrecht took an official visit to Michigan on Thursday and, as confirmed by his coach, he made his commitment official after receiving an offer from Michigan head coach John Beilein. The Wolverine staff had been recruiting the under the radar guard for the last month and the prep point guard will add an option to a Wolverine backcourt lacking depth.

Video, scouting and analysis after the jump.

Michael “Spike” Albrecht is listed at 6-foot-1, 180 pounds on the NMH official roster. He averaged 9.3 points, 6.9 assists and 3.7 rebounds per game this season while connecting on 32 percent of his three point attempts and helping NMH to the NEPSAC Class AAA Championship.

Albrecht is not ranked by any major scouting services and his recruitment boiled down to Michigan and Appalachian State as well as handful Ivy League options.

There isn’t a lot of scouting information on Albrecht on the internet but he began to open some eyes in the final month of the season with his strong performances in the NEPSAC playoffs. Here’s a recap of Albrecht’s tournament run which ended up with him being named Most Valuable Player of one of the top prep leagues in the country:

Albrecht’s MVP run: It was quite the week for the post graduate from Indiana. Albrecht scored a team-high 23 points to go along with six assists and two steals en route to being named tournament MVP.

“We knew we deserved this one but we had to go out there and earn it,” said Albrecht. “I am glad for my teammates, my classmates and all of our coaches.”
Albrecht also had a huge game in the semi-final upset win over Brewster as he scored 16 points and five of his team’s nine points in overtime.

We got a hold of Adam Finkelstein from the New England Recruiting Report and he provided this scouting report on Albrecht:

He’s an old-school style pass first point guard.  He’s very cerebral with a high basketball I.Q.  His best physical attribute is his endurance – he can play all day – but he isn’t especially explosive.  He’s a threat with the three-point line but not a great shooter.  He takes care of the ball, makes very good decisions, and knows how to run a team.

Earlier in March, Finkelstein published a similar report at ESPN after watching Albrecht in the NEPSAC AAA Championship game, noting that he was one of the surprise players of the event.

In the NEPSAC AAA Semifinals, Albrecht was instrumental in propelling NMH to an upset win over previously undefeated Brewster Academy:

Big Spike Albrecht was able to score 5 of his team’s nine points in overtime, not because he is a scoring assassin, or has to prove to scouts that he will perform for them because they’ve committed resources to his future, but because he has a big heart. Albrecht was willing to sacrifice his body in the lane, was able to drown out the noise from the crowd as well as that little voice of doubt that rings whenever a pressure situation pressure situation presents itself, and come through for his team when they needed him to.

“It was nice,” said Albrecht of being fouled and having a chance to shoot uncontested shots. “I always enjoy going to the line at the end of the game. I pride myself on making free throws because that’s what wins games.”

Michigan is in the unenviable position of having to scramble to find a point guard sooner than later. Albrecht isn’t the highest rated point guard on the board but he has the makings of a solid fit for the Wolverines. That’s not to say he’ll be Michigan’s starting point guard or be a 30 minute per game answer, but he should find a niche given the talent around him.

Michigan has a wealth of front court options on next year’s roster including Tim Hardaway Jr., Mitch McGary, Glenn Robinson III among others. Most of those players are the type that need someone to get them the ball in the right spots rather than primary ball handlers. Michigan doesn’t need a point guard that will 15 shots a game, it needs someone that can distribute offensive opportunities among the other four players on the court. Albrecht could be that guy.

With Darius Morris and Trey Burke, Michigan relied on a point guard that dominated the ball for much of the last two seasons. That recipe worked well, but it’s not the only way to play basketball. John Beilein’s “two guard” offense was originally designed as an evolutionary measure for one of Beilein’s early teams that didn’t have a true point guard. It’s significantly different than what we’ve seen over the last two seasons, but it’s an adaption that Michigan’s coaches will have to make to survive.

If Burke were to return, Albrecht would be a perfect candidate to back him up at the point guard position for 5 to 10 minutes per game.

Albrecht has ties to two of Michigan’s most fertile recruiting territories: the region of Northwest Indiana and the New England Prep School league. He also played his grassroots basketball for the SYF Players, a team with strong Wolverine ties. Albrecht joins Mitch McGary, Glenn Robinson III and Max Bielfeldt as the fourth SYF player to commit to Michigan in the last two recruiting classes.

Albrecht’s ties to the Michigan program go beyond his AAU connections. Spike’s father, Chuck, played Division II basketball at Purdue Calumet along with Zack Novak’s father, Dave. The relationship between the two families is detailed in this old NWI Times article from 2008 including a reference to Spike, a first grader at the time, playing against Novak’s AAU team. It’s safe the assume that Zack Novak (pictured to the right with Spike’s older brother and father) provided some input to John Beilein regarding Spike’s abilities.