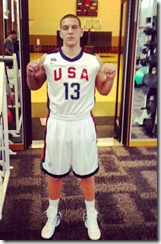 It was a busy week for Michigan commitment Glenn Robinson III. He picked up a fifth star at ESPN, rising to No. 18 in their rankings. He finished fourth in Indiana’s Mr. Basketball voting and was named an Indiana All-Star. The Indiana All-Stars will face the Kentucky All-Stars on June 8th and 9th and will also play in a pair of scrimmages against the Indiana junior All-Stars leading up to the event.

Robinson also traveled to California for the Ball is Life All-American Game and put on an impressive performance yet again.

More on Robinson, fellow commitments Spike Albrecht and Mitch McGary as well as numerous 2012, ’13, ’14 and ’15 prospects after the jump.

Robinson was noted as one of the more impressive players in the event and also showed off his elevation in the dunk contest. You can watch some footage from pre-game practice here or check out a few of his dunks below:

Reports are that Amedeo Della Valle’s scheduled visit to Arizona has been put on hold. That news comes on the heels an Arizona commitment in the backcourt from Matt Korchet. Della Valle is still considering Arizona and expected to visit Michigan shortly and is also planning a likely visit to Ohio State.

Della Valle visited Texas A&M in March and the Aggies are expected to be one of the top contenders for his services.

Albrecht committed to Michigan on his official visit Friday night but here are some reactionary quotes from his coaches and others. First, his Northfield Mount Hermon coach compares their prep offense to Michigan’s system:

“We ran the two-guard offense, similar to what Michigan does, Spike got more and more comfortable. I haven’t had a player, especially a point guard, fit the system that well. As I say with Spike, if there’s a shot he has to take, he’ll take it, if there’s a pass he has to make, he’ll make it. Whatever the play is asking for, he’ll do it.”

“He’s as excited as you would imagine,” Spike’s father, Chuck Albrecht told the Post-Tribune.  “It was really a ‘Good Friday’, really a ‘Good Friday.’
“For it to be the University of Michigan, it’s more than we ever could have dreamt of.  It’s an incredible opportunity.  Things couldn’t have fallen into place any better.‘

McGary had two points and a rebound in five minutes of game action and repors on his play throughout the week were mixed.

Here’s a write up from NBA Draft.net:

Mitch McGary, C: The big lefty who burst onto the 2012 recruiting scene this past summer showed he is definitely far from a finished product. After going from relative unknown to garnering comparisons of Tyler Hansbrough, McGary came back down to earth once he got to the more organized play of his Brewster Academy prep school. Mitch’s motor was advertised as being non-stop, but have yet to see that and have yet to see anything close to the ability of Psycho T. Mitch is a decent athlete and has good size, but he went with the trend of staying more out on the perimeter.

Swish Scout.com noted McGary as a bit of a disappointment but pointed out that he didn’t look to be 100%

Mitch McGary (2 pt., 3 fouls)-Only played five minutes and picked up 3 fouls in that time. Didn’t appear to be 100% in the practices and hobbled down the floor in the scrimmage. Word was he was icing his feet and legs, with speculation he could potentially be battling injury or blisters. Weighing in at 265 lb.s, he’s a big kid with a lot of mass at 6’10”, but none of that looks to be muscle yet. Has a decent lefty stroke and played well in the scrimmage the day before, but looked like he was hurting in the game. It’s hardly a knock for him to be on this based on his play due to said limitations, but was a disappointment to not see more from him.

It seems pretty clear that McGary is a bit out of shape and potentially nursing some injuries. His 6-foot-10 size is legitimate but his playing weight is somewhere below 263 pounds, especially after a summer of strength and conditioning in Ann Arbor. Is

Walton had six points and four assists in 22 minutes in a 76-63 win over Greece and five assists in a 10 point win over Denmark. Team USA is 2-0 in the Albert Schweitzer Tournament and will face Serbia (2-0) today to close out group play.

Michigan, Ohio State, Cincinnati, Xavier, Indiana and North Carolina have all been showing interest in this talented Ohio freshman and he’s off to a hot start with his King James AAU squad this season.

Keita Bates-Diop is one of the top 2014 prospects on Michigan’s radar and the youngster was extremely impressive at the NY2LA Swish n Dish tournament in Milwaukee this weekend. Bates-Diop holds offers from Purdue, DePaul and Northwestern with major interest from Illinois, Wisconsin, Michigan, Oklahoma State and Stanford. Scout.com was impressed with his play ($):

This kid just keeps on getting better. His ball handling and shooting are improving, but it is his athleticism, length, motor, and shot blocking that standout right now.

1 thing very clear after today. Keita Bates-Diop will be wanted man by everyone. He’s displayed it all here today. Scary part..gettin better

Another prospect that received some love at the Swish n Dish was DaRohn Scott. Scott’s high school teammate, Drake Harris, receives more national accolades but Scott has the potential to be a high major big man when all is said and done. He was impressive at Michigan College Practice Camp last year and started the 2012 AAU season strong with Mean Streets. Scott listed Michigan, Michigan State, Notre Dame and Western Michigan and impressed both Scout.com ($) and regional scout Rodger Bohn

Loved what I was seeing out of 6’8 2014 Darohn Scott from Meanstreets.Was game changer defensively before getting blasted in eye.#snd2k12

Monte Morris on Michigan: “I’m not sure how that’s going to work”

Much has been made of Michigan’s renewed interest in Monte Morris. The 2013 point guard capped off a big season and reported that Michigan has been calling again. However, in an interview with Inside the Hall, Morris noted that “Michigan still is recruiting me, but I’m not sure how that’s going to work”. Morris appears to be more of a strong contingency plan at this point as Michigan keeps its options open going forward.