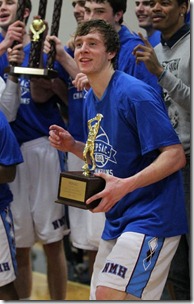 Albrecht committed on his official visit over the weekend and joins Glenn Robinson III, Mitch McGary and Nik Stauskas as the fourth member of Michigan’s top ten ranked class.

“Spike Albrecht is an excellent addition to our basketball program,” said Beilein. “His work habits and love for the game remind me a lot of Zack (Novak), Stu (Douglass) and Corey (Person). He is a very skilled point guard with strong leadership skills, terrific court vision and a very high basketball IQ. Spike is a proven winner who values an assist just as much as any points he may score. Our team will love playing with him and our entire coaching staff is looking forward to coaching him in the years ahead.”

More from the official school release after the jump.  (Photo: Nick Baumgardner)

“I’m really excited to be signing with Michigan,” said Albrecht. “Playing in the Big Ten has been a dream of mine ever since I was little. I’m just happy and thankful that I get the opportunity to attend such a great school and be a part of a great basketball program.”

Albrecht, who set the school record with 241 assists, averaged 9.3 points, 6.9 assists, 3.7 rebounds and 1.3 steals as he helped Northfield Mount Hermon to a 29-6 record and the NEPSAC Class AAA title. Led by his 16 points, three rebounds and eight assists, Albrecht helped the Hoggers upset No. 1 and previously undefeated Brewster Academy, 87-83 in overtime, in the semifinal to reach the title game against St. Thomas Prep. Finishing with 23 points, two rebounds and nine assists, Albrecht led the Hoggers to a 74-70 victory for the Class AAA title. For his efforts, he earned tournament MVP honors.

During his high school career at Crown Point, Albrecht was a three-year starter and tallied 1,059 career points. As a senior, he averaged 21.0 points, 4.2 rebounds and 5.1 assists to help the Bulldogs to an 18-4 overall record and a runner-up finish in the Duneland Athletic Conference (11-3). He earned All-State honorable mention honors from the IBCA and Associated Press and the Duneland Conference’s Player of the Year honors. Throughout his three varsity seasons he earned Duneland All-Conference honors, Crown Point’s Team MVP and All-Area selections by the Times as well as the Post Tribune.

“Spike is the lowest maintenance player I have ever dealt with. He is the most humble player I have ever worked with and I have been coaching here for 10 years. He appreciates every kind gesture that comes his way. He appreciates every opportunity presented to him. He takes full advantage of it all. He has been just a pleasure to work with. Spike has a super high basketball IQ and really understands the game better than most players I have worked with. It’s that old cliché of the game has really slowed down for him and because of that he is able to make the better play 99% of the time. If it is a shot he is supposed to take he takes it. If it is the pass he is supposed to make he makes it. He is going to be a great asset to Michigan.”

“I have had the opportunity to coach a lot of kids over for many years, and I am always hopeful to see good things happen for them. I couldn’t be happier than I am for Spike and the opportunity he has been given at the University of Michigan. I have always known how talented he is and how hard he has worked to get where he is today. All he needed was that chance and he is getting that from Coach Beilein. The people in Ann Arbor are going to love his game. He is a multifaceted point guard who can score when needed or become a distributor. He is a great quarterback. After growing up and being family friends with Zack Novak, Michigan fans will see some of the same qualities and traits Zack displayed for so many years n Spike — that work ethic, drive and passion for the game.”