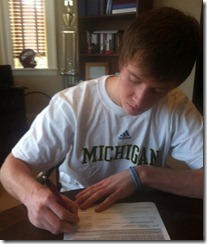 Part two Getting to Know feature with Spike Albrecht features his relationship with Mitch McGary and Glenn Robinson III as well as former Michigan captain Zack Novak. The interview even includes an “it’s Michigan” reference from the future Wolverine floor general.

When you were playing against Mitch and Glenn, and with them briefly in AAU, did you ever think the three of you would be playing together in college?

“It’s actually funny because us three sued to room together, in AAU. We’d always be joking around. Glenn was already committed at that time and Glenn was always talking about it, getting Big Mitch to go there, and Mitch was always joking like, only if I can get Spike to come with me as a package deal. But they only had one scholarship left and I never thought anything of it. I knew they were all over Mitch, though. But we always used to joke about it, and I look back on it now and I can’t believe it actually came true.”

Are you excited to be playing with them?

“I couldn’t be more excited. I’ve known Mitch since third grade. We’ve been AAU rivals since third or fourth grade, and Glenn was one of my bigger rivals in middle school. It’s going to be a lot of fun.”

So you guys have been in regular contact throughout this whole thing, right?

“Oh yeah. I think Mitch gets home in the next day or two, and when I get home were going to go work out together and stuff and get some shots up. It’ll be a lot of fun.”

What was it like talking to them about committing to Michigan?

“It was unreal. When they first heard Michigan was recruiting me I had them both calling me like, ‘Yo, no way!’ Glenn told me that coach Beilein talked to him saying he might be looking at this Spike Albrecht kid and I just started laughing. I was like, ‘Yeah, I’ve been talking to him for a few weeks,’ and Glenn was like, ‘You didn’t tell me?’ But yeah, it was crazy. They were both really supportive and encouraging me throughout the process. It was a lot of fun.”

Did you do anything special to celebrate signing with Michigan?

“No, not really. I had to go right back to school, actually. So I just signed here and my head coach, Coach Carroll, snapped a few photos, all that good stuff. Nothing to fancy.”

When spurred you to commit to Michigan?

“I mean, let’s be real. Nothing against the other schools that were recruiting me or anything, but going into prep school, I had the whole mindset of wanting to go as big as I can. Playing in the Big Ten is a dream, like it is for most Indiana basketball players. Everything about it was perfect. I’ve known Novak for a long time, too, and seeing the success he’s had was big.”

How much of an influence did Zack have in your recruitment and your decision to commit?

“I’ve known Zack since, like, first grade because he and my brother used to go at it in AAU. It’s just funny because I’ve always been, like, the little brother and they always used to pick on me and give me crap, and now it’s like, I’m going to Michigan. The whole time, he was really pumped up for me because I was in a kind of similar situation as him recruiting-wise. The first thing Zack did when he saw me on my recruiting visit was give me a hug and he said, ‘You’re livin’ the dream, bro.’ That says it all, right there.”

Are you familiar with Michigan basketball? Who were you a fan of growing up?

“I’m not gonna lie, I was a big Hoosier guy. Indiana. I can’t deny it. But I think when Zack went to Michigan, everyone in my area became a Michigan fan. There were definitely a lot of Zack Novak fans. The things he’s done for that school are unbelievable. It’s crazy. I love it.”

You came in under the radar, and most Michigan fans are unfamiliar with you. What’s one thing you would like Michigan fans to know about you?

“I’m a competitor. I know I’m not the biggest, fastest, strongest kid out there, but I’m gonna play hard for the full 40 minutes, just battle my butt off and play with heart. I have a chip on my shoulder.”

What are your strengths and weaknesses as a player?

“I’ll start with weaknesses. I think the thing about transitioning to the college level, especially the Big Ten, and Michigan coaches know about this, but I need to get better on defense. But I think that’ll come as I get stronger and more athletic and all that good stuff. And defense is just heart and working hard after that. I need to sure up my jumpshot a little bit more, my 3-point shot especially. I pretty much need to be knock-down, at this level. If I get an open shot I need to make sure I hit it. I’m not going to do anything to wow people, I’m not too fancy, but I take care of the basketball, I try to make good decisions. It sounds simple, but I get the job done.”

It looked like you guys ran a lot of pick-and-roll stuff at Northfield. How do you see yourself fitting into the pick-and-roll-centric offense Michigan runs?

“I love the pick-and-roll. There’s so much you can do off of it, so many reads. A lot of people think the pick-and-roll only involves two players but it opens so much up for everyone on the floor. It gives you an extra step so that when defenders help on you you’ve got the drive-and-kick. I know Michigan’s big on the ball screens, and I’ve been doing ball screens my whole life, pretty much, just because I’ve always been the primary ballhandler.”

What or who has been your inspiration throughout your career?

“As far as someone who’s inspired me, I would say my dad. He’s been there for me since I was little. He’s always pushed me to get better, and worked with me on my game. I’ve learned a lot from him — he’s taught me everything I know about basketball. As far as who I watch and who I try to model my game after, I love Steve Nash, the way he plays. I once heard a Steve Nash quote, actually. It was, ‘If everyone worked as hard as me, I’d be out of a job.’ He’s not as athletic as the guys he plays against, so he has to work harder to find different ways to play and get on the court. I think that’s similar to me and my game.”

“I’m not gonna lie. I love Hoosiers. Hoosiers is a great movie. Typical, I know. Corny, but it’s great.”

What was your favorite TV show growing up?

“My roommates are saying Jersey Shore, but it’s not Jersey Shore. What cartoons did I like? I was a big Tom and Jerry guy. It’s an oldie.”

Do you have any weird pre-game rituals?

“No, I’m pretty straightforward. I’ll stretch. I need to stretch a lot because I’m super inflexible, but that’s about it.”

Any idea of what you’ll study at Michigan?

“I want to get into the Business School at Michigan. That’s what Zack did. I know it’ll be tough, but that’s the route I’d be hoping to go.”

“Probably it would be, ‘Don’t sell yourself short and don’t let other people tell you what you can and can’t do.'”

When you aren’t playing basketball, what are we most likely to find you doing?

“Nothing basketball-related? Because I would say shooting or working out. To be honest, I’d probably be sleeping. I sleep a lot.”