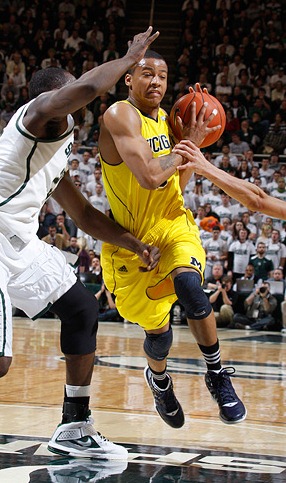 John Beilein addressed the media this afternoon and provided a number of roster updates including a suspension.

First and foremost, Michigan’s point guard and preseason AP All-American Trey Burke will be suspended for Thursday’s exhibition game against Northern Michigan due to a violation of team rules. Beilein announced that Burke would serve a one game suspension and was hopeful that he’d learn from his mistake. Beilein addressed the suspension in a written statement:

“We have high standards and values for our student-athletes and we expect everyone to meet those expectations. Trey will sit out the first game as a result of some ‘out of character’ decisions he now regrets.”

Beilein announced that Spike Albrecht would start at point guard in Burke’s absence. He added that Tim Hardaway Jr., Glenn Robinson III and Jordan Morgan would be in the starting lineup but that the fifth starter is to be determined.

Jon Horford, who injured his knee in a recent practice, will not play. Mitch McGary (leg atrophy) will play on Thursday night, but might not start.