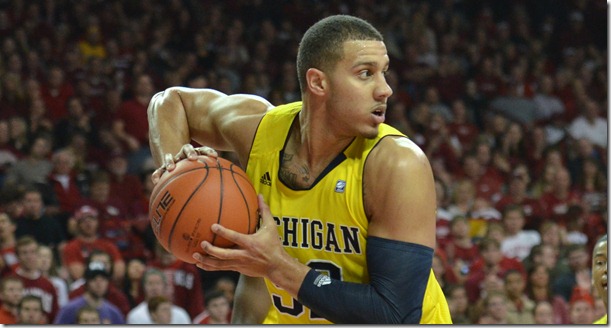 Michigan will make its debut appearance in the newly renovated Crisler Center tonight in an exhibition clash with Northern Michigan (7 p.m., BTN.com). The Wolverines should be able to top Northern Michigan, who finished last in the GLIAC North last season with a 9-17 record overall, with relative ease. Then again, last year’s Michigan squad only topped Wayne State by eight points, 47-39, in exhibition play. We’ll spare an entire preview of the Wildcats but here are six things to watch for when Michigan takes the floor this evening.

Trey Burke is suspended for Michigan’s opener which will provide roughly 30 minutes of additional playing time for John Beilein to distribute among players that might not originally be in the rotation. Spike Albrecht is the immediate beneficiary, he’s in line to start and will have every opportunity to demonstrate his abilities in his debut. Beilein has praised Michigan’s point guard for being smart with the ball and taking charges. “He’s very clever and he has great vision,” Beilein explained. “He makes some plays that make us smile.”

Burke’s absence should also prove an opportunity for some of Michigan’s other guards to step up. Eso Akunne has provided back-up point guard minutes in the past while Nik Stauskas, Caris LeVert and others are likely to see increased ball handling responsibilities as well.

Mitch McGary committed to Michigan 363 days ago, tonight he finally makes his debut. McGary, Glenn Robinson III, Nik Stauskas, Caris LeVert and Spike Albrecht are one of the most ballyhooed freshmen classes in recent Wolverine history and they’ll finally make their debut. All eyes will be watching the freshmen from Robinson’s first alley-oop to Stauskas’s first three pointer and McGary’s first emphatic throwdown.

Beilein noted that expects the freshmen “to be freshman” in their debuts but there will be a lot of anxious eyes watching. No more recruiting videos, rankings or scouting reports, Michigan’s newcomers are finally putting on the uniform and stepping on the floor.

Will emphasis on rebounding be noticeable from day 1?

We’ve heard about it all summer: this is the Michigan team that can finally rebound. The additional size, athleticism and length on this year’s Wolverine roster is meant to eradicate the Achilles’ heel of the John Beilein’s previous teams. Sure, it’s just Northern Michigan but a year ago, Michigan was outrebounded by Wayne State in its exhibition win. An decisive rebounding edge on both backboards would go a long way toward proving that the change in mentality and ability is meaningful.

Michigan only rebounded 40 percent or more of its misses in four games last season and if the Wolverines can put forward that sort of performance, it would be an encouraging first step. As John Beilein said at Michigan’s Media Day, sometimes “it is okay to score off an offensive rebound”.

A couple early hot shooting performances in exhibition won’t mean much of anything in the grand scope of the season but pay attention to the quality and distribution of looks that Michigan is getting. Is Michigan’s offense predicated around attacking the basket or does it revert into the three point heavy attack traditional under Beilein?

A year ago, Michigan attempted 44.2% of its field goals from three point range. Use that as a barometer to gauge the Wolverine offense while tracking 3PA/FGA. The other stylistic stat to follow is FTA/FGA, does a more aggressive Wolverine offense net more free throw attempts than we’ve seen in recent years? It’s probably best to reserve any judgment on tempo given that Michigan will be counting on their backup point guard to set things up throughout the night.

John Beilein hopes to get Caris LeVert 10 to 20 minutes in his first career game. All reports are that LeVert has surpassed expectations throughout early practices. He’s skinny, and could use an opportunity to add muscle, but could he make an impact this season? If he puts together a couple strong exhibition performances, it’s a real possibility that he could play meaningful minutes in the backcourt if he impresses early.

Pay close attention to the lineup combinations on the floor. We know Albrecht, Hardaway, Robinson and Morgan are in the starting line up but that doesn’t provide a dead tell on situational positions either way. Does Beilein add another wing guard or a big man to that lineup?

As the game plays out, play close attention to the combinations on the floor. What bigs play together? How much time does Robinson play at the four? Which post players look most comfortable – on both ends – while playing the four position. Jordan Morgan has been playing significant time at the four spot and discussed the intricacies of playing perimeter defense at Big Ten Media Day, how will he look further from the hoop?

Jon Horford will sit the opener while recovering from a knee injury while Mitch McGary will play but may be limited. Those injuries might limit just how much two post offense we see but the game should provide a good first taste.

Bonus! How to watch?

Tonight’s game will be broadcast through the Big Ten Digital Network. The cheapest way for Michigan fans to access this content (which will broadcast Michigan’s games against Northern Michigan (ex.), Saginaw Valley St. (ex.) and Slippery Rock) is to subscribe to MGoBlueTV on a monthly basis. That package costs $9.95 and will include Michigan content only. If you are interested in watching games from other schools, the Big Ten Network sells a monthly $14.95 package. Subscriptions can be purchased here.