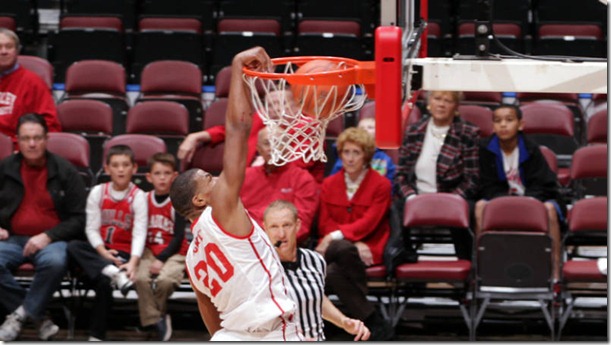 Michigan heads on the road for the first time this season with a weekend trip to Peoria, Illinois to face the Bradley Braves. After going 7-25 in Geno Ford’s first season, the Braves appear to be much improved from a season ago. Bradley sits at 5-1 but a closer examination of its resume reveals that it might not be time to crown Ford’s team as the country’s most improved just yet.

Bradley’s five wins are over opponents with an average KenPom rank of just 305 and just one victory was over a team ranked better than 300. That was a seven point win over the same IUPUI team (ranked 238th) that Michigan beat by 37 points. The Braves lost their only game against a high major opponent, by 19 points against South Florida. Michigan will need to execute in its first true road game this season but should still have dramatic statistical and talent advantages when it takes the floor.

Geno Ford’s offense revolves around pushing the tempo and attacking the basket. Averaging nearly 70 possessions per game, Bradley is the fastest team that Michigan has played this season. Bradley attempts just 24% of its field goals from three point range (320th nationally) and for good reason. The Braves connect at just a 26% clip from beyond the arc (312th nationally) compared to an impressive 54% rate inside the line (33rd nationally).  Bradley’s offense values the basketball, coughing it up on just 17% of its offensive possessions, but isn’t a great offensive rebounding team and doesn’t get to the free throw line often.

Defensively, there’s not a lot to write home about. There aren’t many glaring weaknesses in Bradley’s defensive profile, but there aren’t many strengths either. Similar to the offensive end of the floor, the Braves fare much better inside the arc than on the perimeter. Bradley opponents are shooting nearly the same percentage inside (39.8%) as outside (37.6%) – two figures that speak equally to the quality of the interior defense and the lack thereof on the perimeter. The Braves are also above average in the turnover department, forcing turnovers on 23% of their opponents possessions, but are just an average defensive rebounding team. The stats aren’t bad but it’s tough to judge their veracity given the fact that South Florida, a fairly offensively challenged team in its own right, scored an impressive 1.14 points per trip while shredding the Braves.

Walt Lemon Jr. and Dyricus Simms-Edwards anchor the Bradley backcourt. Both players are shooting well under 20 percent from three point range despite career averages over 30 percent. Lemon and Simms-Edwards are above average creators for their teammates, get to the free throw line and make over half of their two point attempts. Lemon, known for his extraordinary quickness, is a bit more turnover prone while Simms-Edwards has picked up 17 steals in just six games. Jake Eastman doesn’t use many offensive possessions but is extraordinarily effective when he does, connecting on 66% of his twos and 38% of this threes.

At 6-foot-6, 215 pounds, Tyshon Pickett (above) might be the most dangerous Bradley player. He’s one of five starters averaging double figures and also grabs over seven rebounds per game. Pickett plays 22-feet and in but he makes 55% of his twos, gets to the line, is active on both backboards and is even a good shot blocker. Pickett should be yet another intriguing but challenging match-up at the four position for Michigan freshman Glenn Robinson III as he adapts to playing the combo forward position at the Big Ten level.

6-foot-9 sixth-year senior Will Egolf tore his right ACL twice in his college career but is still an above average shot blocker and defensive rebounder down low. Egolf appears to have added the three point shot to his repertoire in his sixth season as he’s hit 6-of-14 (43%) triples after missing the first 16 long range attempts of his career. Jordan Prosser backs up the five spot and is an able finisher and the team’s best offensive rebounder.

Sophomore Jalen Crawford is the younger brother of Joe (Kentucky) and Jordan Crawford (Xavier), names familiar to most local hoops fans. Crawford averages around 20 minutes and got his first start against Central Michigan on Wednesday. The Detroit native attempts nearly half of his shots from three point range despite connecting on just 3 of those 16 attempts.

This Bradley team is better than last year but probably isn’t as good as its 5-1 record might indicate. Simply put, this isn’t a team that should be able to faze Michigan, even on its home floor. Bradley’s fans shouldn’t be underestimated as the Braves have a loyal fan base (does anyone else remember legions of Bradley fans making the trek to watch Patrick O’Bryant lead the Braves to the Sweet 16 at the Palace in 2006?) and Michigan is the highest ranked team to ever play at Carver Arena. Playing in a true road game will be a good opportunity for Michigan’s freshmen that have yet to play in a hostile venue.

Pomeroy likes Michigan with 90% confidence and predicts a 75-60 final score. The Wolverines should be able to control the glass against Bradley and have a great opportunity to prove Tuesday night’s disappointing interior defense was an aberration. An early start will be critical as Michigan looks to take the crowd out of the game and prevent the Braves from drawing any early confidence.

This & That: Michigan is the highest ranked team to ever visit Carver Arena, which opened in 1982. Bradley beat Michigan in its previous trip to Peoria with a 74-67 upset on December 8th, 1997. Max Bielfeldt is a Peoria native and was heavily recruited by Bradley. Less than 1000 tickets remain in the upper bowl for Saturday’s game with just singles available in the lower bowl. Michigan beat Bradley, who went 7-25 on the year, by 11 points last year but the game was tied at halftime. Michigan was led by Evan Smotrycz who hit five triples en route to 20 points in that victory.