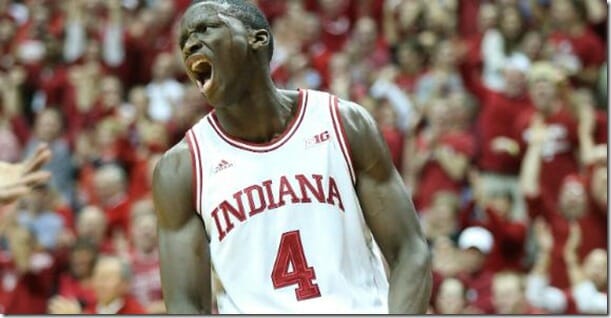 With Minnesota and Illinois each hanging on at the end of the season after some conference stumbles, the Big Ten has seven teams dancing in the NCAA Tournament this season. It’s an impressive number, but perhaps even more impressive is that five Big Ten teams hold top-5 seeds. After capturing the Big Ten Tournament championship on Sunday, Ohio State saw its seed rise by a few lines and it seems like the Buckeyes are currently playing their best basketball of the season. Indiana and Michigan State are both coming off painful semi-final losses in the conference tournament — the Hoosiers were able to maintain a 1-seed but lost possession of the No. 1 overall seed, now claimed by Louisville. The top four seeded Big ten teams have drawn favorable locations, with Michigan State and Michigan playing down the road in Auburn Hills and Ohio State and Indiana nestled away in Dayton. After beating up on each other all season, it’s time to see what the Big Ten — widely recognized as the nation’s toughest conference top-to-bottom — can do in the tournament. Here’s a glance at the round of 64 match-ups for each Big Ten team after the jump.

Ken Pomeroy has the game between Long Island and James Madison as a virtual toss-up. Honestly, it doesn’t much matter which team Indiana plays; the Hoosiers will certainly run them out of the building with their combination of aggressive, attacking offense and suffocating defense. Both Long Island and James Madison are winless against RPI top-100 teams and have little chance at upsetting Indiana, but depending on who wins the play-in game the Hoosiers will be facing a much different offensive attack. James Madison likes to slow the pace, averaging fewer than 65 possessions per game, while Long Island will push the ball and averaged the 29th-most possessions per game at almost 70. Long Island’s style will certainly play right into Indiana’s frenetic hands, while limiting possessions would be a good idea for James Madison. One newsworthy note: James Madison forward Rayshawn Goins was arrested Sunday night in Harrisonburg on suspicion of disorderly conduct and obstructing justice. James Madison coach Matt Brady suspended Goins for the first half of the play-in game against Long Island. UM Hoops pick: Indiana

Ohio State is rolling, and that’s bad news for Iona. The Buckeyes have won their past eight games, including an upset of Indiana on senior night near the end of the regular season and blasting through Michigan State and Wisconsin on their way to a Big Ten tournament title. Thad Matta’s club is peaking at the right time and look to be in excellent position for a deep tournament run — especially having been placed in Dayton. For its part, Iona enters the tournament having won the MAAC conference tournament, but the Gaels had a rough conference season. They lost six of their final nine games to close out the regular season before making a run in the conference postseason. Iona will attempt to push the pace against Ohio State, but they do so at their own peril. With solid offensive execution of late and the half-court mastery of Aaron Craft and DeShaun Thomas, the Buckeyes will most likely want to keep the pace slow — but with athletes like LaQuinton Ross and Sam Thompson, and Craft distributing, they can run with the Gaels if they wish. Kenpom: Ohio State 83, Iona 67 UM Hoops pick: Ohio State

After losing three in a row going into March, Michigan State needed some answers. The Spartans appeared to have found them in the form of a surprisingly easy win against Wisconsin at home, but the same questions reappeared in the Big Ten tournament. Michigan State squeaked by Iowa after a complete come-apart by the Hawkeyes in a game that arguably could have vaulted them into the NCAA tournament, and then the Spartans experienced a bit of a come-apart of their own against Ohio State, making some astoundingly bad plays down the stretch that cost them the game. Can Keith Appling produce consistently? Can Derrick Nix and Adreian Payne avoid foul trouble? How healthy is Gary Harris? These are all questions that remain to be answered, but once again Michigan State finds itself with a high seed and the distinct possibility of a deep run in the tournament. Standing in its way is Valparaiso, a team that hasn’t lost in about a month. The Crusaders lead the Horizon league in offense, and their effective field goal percentage of 56% is 4th in the country. Clearly this is a team that is well-coached and on a roll. That being said, the only time Valpo faced a team that has a defense anywhere near Michigan State’s is when it played Nebraska at the beginning of the season — and failed to score 50 points. If Michigan State plays like it did the majority of its game against Iowa, the Spartans might be in trouble. Chances are, they won’t. Kenpom: Michigan State 70, Valparaiso 61 UM Hoops pick: Michigan State

This game is currently being exhaustively dissected on this site, but we’ll throw in the basics here, anyway. Michigan is, in a sense, limping into the NCAA tournament, having gone 6-6 in its final 12 games. The Wolverines can’t seem to find consistency on defense, and when they can’t get out and run their vaunted attack stalls at times — just watch their most recent game against Wisconsin for proof of that. That being said, Michigan still has one of the best players in the country in Trey Burke and one of the more talented rosters in the tournament. Not only that, they are playing close to home in Auburn Hills, which is especially paramount for a team that struggles on the road the way Michigan does. The Wolverines are facing a team that is remarkably similar to them, offensively. South Dakota State also boasts one of the best point guards in the country in Nate Wolters, they also are very efficient on offense, they also hardly ever turn the ball over and they also don’t get to the free throw line often. Defensively, however, the Jackrabbits will be one of the worst Michigan has faced all season. And if the non-conference season taught us anything, the Wolverines are really, really good at exposing so-so defensive teams. Expect South Dakota State to stick around through its offensive attack, but Michigan’s offense should wear the Jackrabbits down enough by the end of this one to win comfortably. Kenpom: Michigan 78, South Dakota State 65 UM Hoops pick: Michigan

It’s tough to think of a program as antithetical to everything Marshall Henderson represents as Wisconsin. The, ahem, “colorful” guard is one of the more intriguing players in the country and one of the reasons that this match-up is so interesting. Ole Miss plays fast but smart, averaging over 70 possessions per game with a turnover percentage of just under 16. Wisconsin is also extremely disciplined, with a turnover percentage that ranks two spots ahead of Mississippi’s nationally, but of course the Badgers play slower. Much. Slower. The Rebels have played good defense out of conference, but in the SEC they struggled to keep opponents from hitting shots, ranking 11th in the SEC in effective field goal percentage allowed. This was partly due to a non-conference schedule that wasn’t exactly punishing, with only two teams in the RPI top-100. If Wisconsin can dictate the pace of this game and find some offense from its outside shooters, the Badgers will win. But this is an exceedingly tough draw against a team that just beat Florida for the SEC tournament championship. Kenpom: Wisconsin 67, Ole Miss 62 UM Hoops pick: Ole Miss

Boy, did Illinois’ win over Gonzaga end up appreciating, huh? After the topsy-turvy Big Ten season the Illini had, it turns out they had just enough big wins to dance. With two wins over fellow tournament team Minnesota and one apiece over Ohio State and Indiana, along with the aforementioned early-season victory over the Zags, it’s tough to argue otherwise. The Illini will have their hands full against a Colorado, a team out of the weaker Pac-12 that still has some solid wins on its resumé. The Buffs defeated Oregon — a team that just won the Pac-12 tournament and is considered vastly underrated by nearly all analysts — twice in the regular season, and would have beaten 6-seed Arizona twice as well had the referees not temporarily lost their minds at the end of the two teams’ first meeting, waving off a 3-pointer Sabatino Chen clearly got off before the buzzer. Both teams play at a similar pace and both will rely on guard play. Illinois is utterly dependent on making 3-pointers, and if DJ Richardson and Brandon Paul have an off night (with the two guards shooting 32 and 33 percent from beyond the arc, respectively, it’s a distinct possibility), it could spell doom for the Illini. Both teams have average offenses and good defenses, and the game will likely depend on which team makes more big shots. Kenpom: Illinois 65, Colorado 64 UM Hoops pick: Colorado

In what is perhaps the most obvious upset special in the tournament besides the poor saps at Oklahoma State who got matched up with Oregon as a 12-seed, Minnesota will take its vaunted rebounding attack to Texas to face off against UCLA, who likely will not put up much of a fight on the glass. The Gophers are the nation’s best offensive rebounding team, with an offensive rebounding percentage of just over 44. The Bruins? They rank 246th in defensive rebounding. UCLA can take heart in the knowledge that Minnesota has lost seven of its last 10 games after suffering a demoralizing first-round exit in the Big Ten tournament. Not only that, but rebounding isn’t the only factor relevant to winning. Minnesota turns the ball over consistently, and if UCLA forces turnovers and gets out in transition, the Bruins have the horses to orchestrate the kind of offense they like to. The Gophers also can’t shoot 3-pointers very well, and if they have trouble finding opportunities inside they just might fall into the trap of shooting too many. That being said, Kyle Anderson and the Wear twins, good luck containing Trevor Mbakwe. The Minnesota star is experienced, athletic and mean and will most likely be able to get what he wants in the paint; especially in what could be the last weekend of his college career. This match-up is so favorable to Minnesota it feels like picking the higher seed is the real upset. Kenpom:  Minnesota 70, UCLA 67 UM Hoops pick: Minnesota