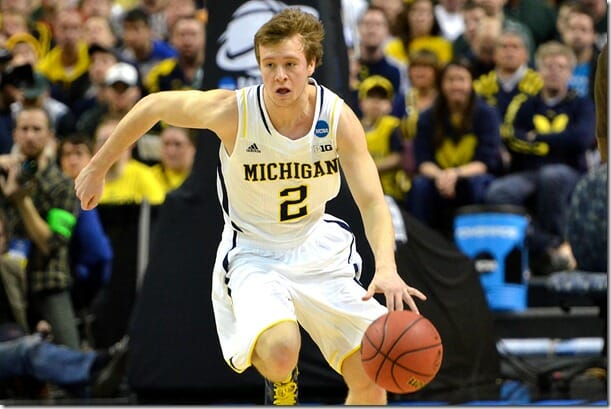 Late in the first half of Michigan’s 78-53 drubbing of Virginia Commonwealth, Trey Burke brought the ball past half court to the top of the key. Sophomore guard Briante Weber was focused on staying in front of Burke, and didn’t see Mitch McGary setting up at the 3-point line for an on-ball screen.

Let’s just say nobody called out the screen.

Weber ran smack into McGary and fell in a heap, which freed Burke to hit a mid-range jumper. The play was an apt metaphor for the role McGary played in stopping VCU’s Sweet 16 hopes dead in their tracks.

Michigan’s freshman big man led all scorers with 21 points and snagged 14 rebounds in what was the definition of a breakout game. He completely dominated the Rams in the post and ran the floor like a seasoned vet. McGary saw his performance as a simple extension of what he’s been doing all season.

“I was just trying to grab rebounds and grab loose balls, and I ended up having a good game,” McGary said during the postgame press conference on Saturday. “I just played with a lot of energy, my teammates fed me and I got after loose balls, dove on the ground and got some rebounds. That was it.”

While McGary’s game plan may sound simple, it was by no means easy. It’s been a long road for McGary this season coming back from an injury, not to mention slimming down after putting on some weight after arriving on campus. Michigan assistant coach Bacari Alexander said McGary was all the way up to 270, but is now playing at 255.

Michigan captain Josh Bartelstein said he has been impressed with McGary’s work ethic this season.

“He’s worked so hard. He’s been in the gym after everyone. He’s lost weight, he’s eating less food. He’s made a dedicated effort to be better, and our team is better because of it,” Bartelstein said. “It’s not easy when everybody’s eating ice cream Sundaes and you don’t get one, but the kid deserves so much credit. If he keeps working hard, the sky is the limit because he has everything you need to be a big time player.”

McGary’s emergence as a dominant force inside is occurring at just the right time for Michigan as it hits the Sweet Sixteen. Burke mentioned the importance of McGary’s production to Michigan’s continued NCAA Tournament run.

“He means a lot,” Burke said. “He’s our x-factor. He’s able to give us intensity. He dives on the floor. He gets the crowd into it. He’s a guy who’s definitely key to our success from here on out.”

Michigan’s preparation for ‘havoc’ pays off

In a sense, Michigan has been preparing for this game all season.

It’s almost as well drilled into the media as it is to Michigan’s players: John Beilein hates turnovers and values every possession. His team is a reflection of this obsession, leading the nation by turning the ball over on just 14 percent of their offensive possessions. So when Michigan drew the Rams, who turn teams over at the highest rate in the country, Beilein and his staff knew they would be prepared.

“Every day we are practicing ball possession,” Beilein said. “Don’t turn the ball over. Flow it to the outside hand. Boring stuff that would put you all to sleep. To catch it on two feet, pivot strong. So when we do see it we don’t have to talk about it. It’s somewhat natural to them.”

Michigan turned the ball over slightly more than average but its 18 percent turnover rate was certainly manageable against an aggressive defense like VCU. While the turnaround time between Michigan’s round of 64 match-up with South Dakota State and this game against VCU was short, the Wolverines didn’t need to spend a whole lot of time on individual game preparation.

Josh Bartelstein said the coaches simply emphasized the fundamentals of Beilein’s system — that is, ball control.

“He wrote on the board before the game, ‘just do our fundamentals.’ Stuff we did on June 25th, our first day: catching on two feet, pivoting, you do that stuff we’ll beat them. The stuff that we did on the first day ended up being the key. All day long, guys picking up their dribble, grabbing the ball with two hands, pivoting. It sounds boring, but when you reach a Sweet 16 because of it, the next freshmen are going to know how important it is.”

Mitch McGary will grab most of the headlines from Michigan’s win, and for good reason, but he wasn’t the only Wolverine to step up. Michigan’s peripheral guards all stepped into expanded ball-handling roles against the Ram’s ‘havoc’ full court press.

Trey Burke handles the ball for the vast majority of most of Michigan’s games. But for this match-up, the Wolverines knew they would need other players to help bring the ball up the court given the way VCU consistently denied Burke the ball.

Spike Albrecht, Nik Stauskas and Glenn Robinson III all handled the ball more than they have all season — and they combined for just two turnovers. Bacari Alexander said he was pleasantly surprised by how the somewhat inexperienced crew responded.

“You don’t know until you know. Many of these young men have not been on this stage, NCAA tournament, competing for a national title,” Alexander said. “Often times there is a level of curiosity as a coach as far as how they’re going to handle that stimuli. If we’re being honest, I would say I was quite surprised and even more impressed.”

John Beilein mentioned the steady play of Spike Albrecht spelling Trey Burke during the post-game presser. Albrecht played 14 minutes, made the only shot he took (a 3-pointer) and threw a highlight reel bounce pass in transition that led to an easy basket.

“That was the one outlier we knew we had in here against the press.  With the one day’s rest, with the attention, I mean, those guards are really good at turning people over, and just stealing the ball from you,” Beilein said. “So that was huge for Spike to be able to come in and just give him some rest, and he was standing on the chair singing the Victors because our team loves him.  They love playing with him, and he did a wonderful job.”