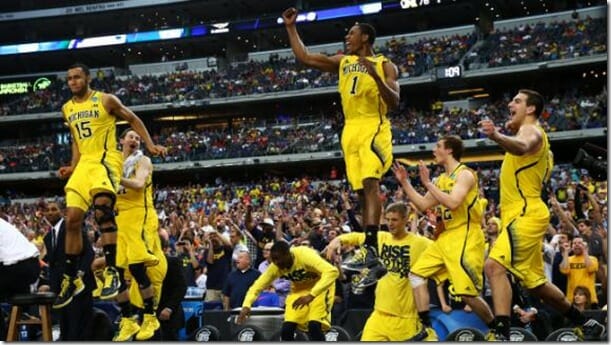 If you blinked, chances are you missed a Michigan score during the first three minutes of the Wolverines’ 79-59 Elite Eight victory over Florida.

With an eye seemingly toward making up for all the tough starts this team has endured and had to overcome this season, Michigan came out with swirling defense, boundless energy and hot shooting. The Wolverines kicked off the game with an 13-0 run, and they did it by incessantly pushing the pace.

The Gators needed a timeout less than two minutes into the game just to catch their breath.

“We felt like we came out against Kansas pretty sluggish,” Trey Burke said after the game. “And we felt today the key was to come out and throw the first punch.”

And punch they did. Over and over again. Michigan’s first three baskets came off fast breaks after missed shots by Florida. A layup and a dunk by Mitch McGary, followed by an open 3-pointer in transition for Nik Stauskas, and the Gators were firmly on their heels.

This hasn’t been the norm for Michigan. The Wolverines have had a habit all season of starting slow this season — especially away from home. Whether it was in Columbus in its first match-up against Ohio State or in Bloomington against Indiana, Michigan has traditionally had trouble starting games off right.

“We just came out with a lot of energy. We were ready to play from the start,” Jordan Morgan said. “We really sat down on defense, and that got our offense going.”

Morgan’s right — it all started with the high-level play of Michigan’s defense. It’s been a consistent storyline all year: Michigan’s best offense is in the transition game, and that starts with good defense. It didn’t hurt that Florida missed six straight jumpers to begin the game, though.

Those misses and subsequent run-outs allowed Michigan to set the tone for the game early and impose its will on a Florida team that looked sluggish out the gate.

“We knew that Florida was a great defensive team, and we wanted to show our ability on the defensive end,”Mitch McGary said. “As soon as we got those stops, we got out running and we were able to get easy transition buckets and build a great lead.”

Entering Sunday’s Elite Eight match-up with Florida, Nik Stauskas was 2-for-16 from behind the 3-point line over Michigan’s past four games. There was no denying it: Michigan’s best pure shooter was in a slump.

To put it mildly, Nik Stauskas is no longer in a slump.

“Nik played one of his best games all season,” Trey Burke said of his backcourt mate’s play against Florida. “We noticed that he was hot early on in the first half. We tried to continue to find ways to find him when he was open.”

Stauskas hit from long range throughout the game: he hit two in a row when it felt like Michigan was piling on in the first half; in the second half, when Florida was making a run and had cut the lead to just 11 points, Stauskas hit a 3-pointer to push the lead back to 14.

Unbelievably, the young Canadian kept finding himself open in the corner, prompting Tim Hardaway Jr. to joke after the game that Stauskas “didn’t have to do anything, he was just standing in the corner and we were finding him.”

Stauskas was asked when he knew it was going to be a special shooting day for him.

“During warm-ups. I felt it right away. I felt it was going to be one of those days. I told Trey, if I’m open in the corner I’m going to knock it down.”

After Michigan’s Elite Eight victory over Florida, Trey Burke revealed he had been battling flu-like symptoms against Kansas, along with a still-unsettled stomach and back issues against the Gators on Sunday. Burke was visibly fatigued throughout the game, especially in the second half.

Freshman backup point guard Spike Albrecht came in and gave Burke some much-needed rest. But as he’s done all season, he did more than just spell Michigan’s star point guard — he excelled in his place.

“That is Spike. Spike is the type of player that comes off the bench and he’s going to give us everything he has,” Burke said of his backup. “We know he’s probably one of the smartest players on our team. He sees certain things out on the court that a lot of players usually don’t see. We’ve seen it all year in practice. So we know when he gets out there that we’re comfortable with the ball in his hands.”

Albrecht made several outstanding plays, including a steal off Florida’s inbound after a layup by Mitch McGary. Albrecht simply stepped in, intercepted a lazy pass by the Gators and scored Michigan’s fourth point in about four seconds. He would hit a 3-pointer later and finish the game with seven points on four shots and three steals in 14 minutes.

But the play Michigan fans will remember from Albrecht will be diving on the court for a steal when Michigan was up 18 points with five and a half minutes left in the game.

“There’s still five minutes left and judging by us the other day, anything can happen,” Albrecht said. “We’ve got to get on the floor, take charges, that’s what we do, that’s Michigan basketball.”