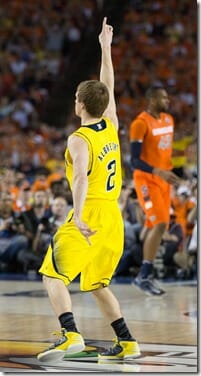 Michigan’s basketball team is chock-full of stars on the rise. Trey Burke just won his fourth Player of the Year trophy, completing the sweep; Glenn Robinson III is back to his pre-Big Ten season form and regularly wows fans with his high flying dunks; Mitch McGary has seen his star rise the quickest of anyone in the tournament, going from a marginal bench player at the beginning of the season to a potential first pick in the NBA draft.

But there’s another Wolverine whose star is on the rise: Spike Albrecht. Given that Albrecht was previously unknown on the national stage but now finds himself playing a key role in the NCAA national title game, we thought we’d provide a primer on Michigan’s backup point guard. Following are just a few things every Michigan fan should know about Spike Albrecht.

Spike Albrecht is the story of the tournament.

At least, according to Jon Horford. When Horford was asked what he thought the most prevalent storyline of the tournament was, he thought to himself for a minute in his usual cerebral way.

This may be a bit of a stretch. Albrecht is a bench player for the Wolverines, the backup to the best player in the country. Albrecht doesn’t play much and doesn’t grab a lot of headlines, especially compared to his teammates, who have a tendency to hog them.

Still, Albrecht is the stuff that March is made of. He’s undersized, under-talented and under-appreciated. In short, he’s the consummate underdog. This makes him an especially juicy March storyline.

“I think [players like Spike Albrecht stepping up in big games] is why we had 70‑some thousand people here. 75,000 people at this game,” John Beilein said on Sunday. “It is that mystery of the young kid, the altar boy, the choir boy like Spike, the 18‑year‑old kid that hasn’t played well coming in and making big baskets that makes this game so great.”

Michigan has its fair share of social butterflies in its locker room, players who are ready to speak with media for long stretches after big games and have no problem artfully articulating their thoughts and impressions of whatever game they just played.

Trey Burke expounds at length on his play, and wouldn’t you? When you’re playing as well as he is, it’s a welcome topic of discussion. Mitch McGary is funny, clever and blunt; he is always down to talk about his growing role in the game plan what it took to get to where he finds himself now. Glenn Robinson III is thoughtful and measured, but he talks plenty.

This is not true of Spike Albrecht.

…But Spike Albrecht is confident.

Nik Stauskas is Albrecht’s roommate, and he summed up the dichotomy between the quiet, unassuming guy in the locker room and the energetic spark plug Michigan fans see flying off the bench aptly on Sunday.

“Although he’s shy, he’s one of the most confident kids on this team,” Stauskas said. “He’s not afraid of the lights or the big stage, he’s just going to go out there and be Spike and he’s going to play his game.”

While this tournament in particular has showcased this truth about Albrecht, Michigan fans have watched him step up in big moments all season — on the road against Ohio State comes to mind, when Albrecht scored seven points in 11 minutes on the biggest stage Michigan had been on thus far in the season.

But it was even more evident when Albrecht entered the game against Syracuse on Saturday. At one point, the freshman took a 3-pointer from about the half-court logo and drilled it in senior Brandon Triche’s eye.

Earlier this past week, former Fab Five members Jimmy King, Ray Jackson and Jalen Rose went on ESPN to dole out advice for this year’s Michigan team. Their advice: “Let your nuts hang.” No one follows that advice quite like Albrecht.

Spike Albrecht is a ladies man.

In Albrecht’s case, first you get the buckets, then you get the national TV airtime, then, according to John Beilein, you get the women. When Michigan arrived back in Ann Arbor after the team’s Elite Eight victory over Florida, they were met with a veritable pep rally in the Crisler Center parking lot.

At one point, Beilein introduced Albrecht as “the most eligible bachelor on campus.” His teammates confirm.

“Spike is a true ladies man,” Stauskas said. “He’s a good-looking kid and all the girls love him.”

Michigan’s freshmen this season were the most heralded class the Wolverines have had since the Fab Five. But that doesn’t mean all five were heralded.

Albrecht was a no-star recruit out of high school, even after playing a year in prep school at Northfield Mount Hermon. He had no high-major offers and was on track to play his college ball at Appalachian State.

“When I was in high school, the looks I was getting, they weren’t Big Ten-quality or high-major-quality,” Albrecht said. “Michigan was my only high-major offer. I’m really thankful coach Beilein took a chance on me.”

So is Beilein. The coach said he watched a ton of film on Albrecht in high school and liked what he saw.

“I think at one time I had like 300 clips of him back to Crown Point, Mount Hermon, and I would watch them over and over again. People were going to think I’m crazy for taking this young man,” Beilein said. “Little did we know we were going to get a kid that was going to make two threes last night.”

…But Spike Albrecht can play.

Throughout this season, Michigan beat writers have been hearing the Wolverines rave about Albrecht’s game. They said he makes passes that look impossible and they said his basketball IQ is off the charts. Michigan fans saw glimpses of his ability in limited playing time, but Michigan players saw it every day in practice.

So, while fans and writers may be surprised at Albrecht’s production in the NCAA tournament, the players are not.

Albrecht earned high praise from Burke after his play in Michigan’s game against Florida.

“We know he’s probably one of the smartest players on our team. He sees certain things out on the court that a lot of players usually don’t see,” Burke said.

“We’ve seen it all year in practice. So we know when he gets out there that we’re comfortable with the ball in his hands.”

Spike Albrecht doesn’t have an “off” switch.

Elite Eight match-up against Florida. The Wolverines are blowing out the Gators, up by almost 20 points. Just over five minutes left in the game.

Albrecht pokes the ball away, resulting in a scrum. The freshman dives to the ground, secures the ball, and calls timeout. That’s in the tail minutes of a blowout victory. To Spike, that stuff doesn’t matter.

“That is Spike,” Burke said. “Spike is the type of player that comes off the bench and he’s going to give us everything he has.”

How would you describe Albrecht? He’s average height — by normal human male standards, not basketball standards, according to which he’s gnome-like — with light brown hair.

He’s essentially the definition of “average white guy.” He just happens to play basketball for Michigan.

Albrecht describes himself as an “average joe” who is getting recognized on campus only recently. Which, obviously, doesn’t matter a lick to him.

“Lately I have (been getting recognized). But lots of times I look like everybody else on campus,” Albrecht said. “But that’s all right. It doesn’t matter to me.”

Just like Florida and VCU, Louisville is a team known for its high-pressure defense. The Cardinals like to employ a press attack to force turnovers and throw opposing point guards off their game. If you’ll recall, Albrecht played exceptionally against both Florida and VCU. Against the Gators he was more visible, but against the Rams Albrecht played 15 minutes spelling a struggling Burke and committed only one turnover against VCU’s famed “havoc” defense.

You can bet on Albrecht getting significant minutes against Louisville on Monday for his ball handling and in order to rest Burke.

“Having Spike, that’s something we didn’t have last year, and Trey Burke, when he would get tired, he was beat,” Beilein said. “When you’re a point guard at this level and you’re bouncing the ball most of the time, you’ve got the ball a lot of the time and you’re guarding a guy who is ‑‑ you’re getting screened and receiving screens over and over again. They get fatigued. And we could sense it how he was playing.”

Albrecht will probably spell Burke but could also play alongside him, something Albrecht says he enjoys.

“I love when me and Trey are together,” Albrecht said. “We do really well together. We both see the floor pretty well, so it’s been pretty successful for us.”

Albrecht is a painfully modest, short, freshman point guard who was supposed to play college ball at a level no higher than Division I-AA. On Monday, he will take the court as a key player for Michigan in the title game of the NCAA tournament.