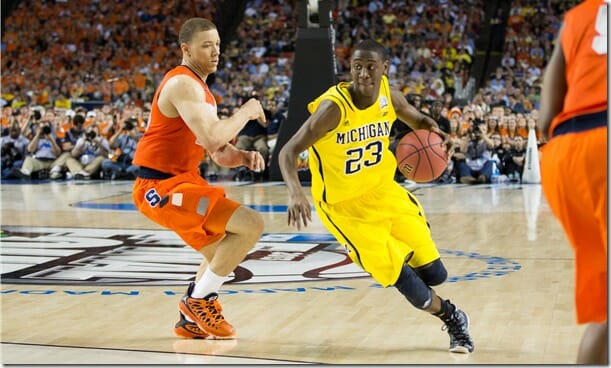 With almost 10 minutes of game time gone by in Michigan’s 61-56 win over Syracuse on Saturday night, the Orange had jumped out to a 14-9 lead and the Wolverines were searching for offense.

Michigan’s usual scoring weapons — Trey Burke, Tim Hardaway Jr. and Nik Stauskas — simply weren’t getting it done. Burke had missed the only two shots he took, Stauskas had missed his only 3-point attempt and Hardaway was bricking shots left and right — the junior had already missed four of the five jumpers he’d taken to that point.

Michigan badly needed someone to step up. So it turned to its bench.

Caris LeVert, a freshman who hadn’t made a basket since March 3rd, kicked things off by hitting a 3-pointer. Jon Horford came off the bench and cashed a 3-point play with a tough layup inside. After he hit his free throw, LeVert hit his second 3-pointer and Michigan was back in the lead, offense humming along.

Michigan is a team identified by its stars: Burke has been winning Player of the Year awards left and right, while Hardaway, Mitch McGary and Glenn Robinson III have all received significant attention as their play has improved and NBA Draft stock has gone up. But on Saturday, it was all about the bench players for the Wolverines.

“Our bench won us this game today,” Stauskas said after the game. “With Caris, Spike, Jordan (Morgan) coming and making huge plays for us, we don’t win this game without them.”

It’s tough to argue with that. Michigan’s bench outscored that of Syracuse 21-11 and provided the Wolverines with a multitude of big plays down the stretch.

One of those plays was a 3-pointer by backup point guard Spike Albrecht, probably the player on Michigan’s roster who was most likely to be bothered by the length of the Orange defenders. Albrecht’s solution with their long arms contesting his shot: just take a few steps back.

The freshman from Crown Point, Indiana hit a 3-pointer in the first half that looked almost as far away as the one Burke hit to tie the game against Kansas.

“The shot clock was going down on that one, so if coach had yelled at me, I would have just said ‘hey, the shot clock, I had to shoot it,”Albrecht said about the shot. “That’s like a no-pressure situation.”

But it wasn’t just on the offensive end where the bench players made an impact. With Michigan switching on pretty much everything, LeVert found himself matched up with nearly everyone on the Syracuse roster at certain points. LeVert, whose defensive abilities coaches have praised all season, was great at using his long limbs and quickness to frustrate the Orange.

LeVert said that even though it was a challenge, Michigan’s coaching staff had them prepared.

Michigan assistant Bacari Alexander had this to say about LeVert’s defense:

“Caris LeVert is a matchup bonus for us because he has great length. At 6-foot-6, his wingspan gives him the height of a 6-foot-9 player,” Alexander said. “Now that space that offenses are trying to negotiate to get to the basket, he can cut them off and make them counter and make them do something different. Caris LeVert is not only growing up, but I think he’s also showing a great maturity and understanding of the game plan.”

While the freshman bench players made plays throughout the game, one of the game’s deciding moments was dictated by a bench player who began this season as a starter: Jordan Morgan. The redshirt junior has seen his role reduced significantly as the season has worn on, but on Saturday he took a charge with 20 seconds left on Syracuse senior Brandon Triche that preserved Michigan’s two point lead. The Wolverines wouldn’t surrender that lead the rest of the game and Morgan would finish the night with a breakaway dunk.

Morgan said that while it’s been difficult at times keeping his confidence up through seeing his playing time reduced throughout the season, he has tried to stay in the moment and keep his focus.

“Just keeping the faith and knowing that at some point my team is going to need me to step up and make a play,” Morgan said after the game. “If I’m not there mentally, I won’t take advantage of those opportunities.”

It was a banner day for Michigan’s bench — Morgan, Albrecht, LeVert and Horford all came up big when Michigan needed them most. All those hours in practice followed by five minutes of playing time through the grind of the season are paying off for Michigan’s reserves — and on the biggest of stages.

When Stauskas said the following about Morgan after the game, he might as well have been addressing all the bench players:

“We always told him, you’re time’s going to come, your opportunity’s going to be ready. That’s what he did today. He was ready.”

On Saturday night, in the Final Four, Michigan’s reserves were ready. And they showed it.