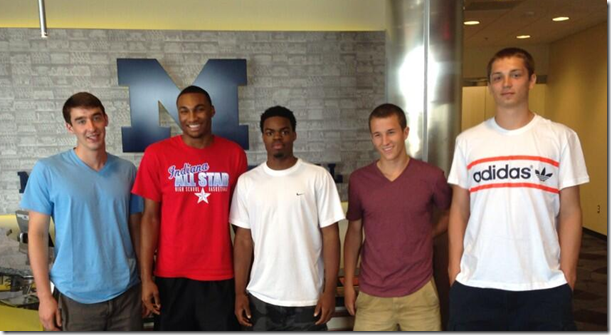 With only 11 scholarship players on next year’s roster, John Beilein has made it clear that he wants to fill out the roster with walk-ons. Andrew Dakich’s walk-on commitment was well publicized but the program announced the addition of Cole McConnell on Saturday.

On Sunday night, word of a third preferred walk-on spread as Sean Lonergan, a 6-foot-5 wing from Fishers High School in Indiana, will also be enrolling at Michigan. The three walk-on additions bring Michigan’s roster to 14 players for next season.

Here’s some footage of Lonergan in action.

Lonergan is an inside/outside threat. He shoots it well from the outside, and has the quickness to beat bigger opponents off the dribble. He also has some bounce off the floor. Lonergan has good footwork and moves in the post as well. It is always tough for walk-ons to get playing time especially at the Big Ten level, but his length could earn Lonergan some playing time down the road.

McConnell is also a 6-foot-5 shooter that played a year of prep at New Hampton, the same school that Evan Smotrycz attended and that Michigan target AJ Turner is transferring to. McConnell hit almost 100 threes in his final year at Sacred Heart Prep in California and is known as a shooter first and foremost. While his commitment fell under the radar, he actually discussed the decision to atend Michigan with NorCalHoops in March:

“Lots of reasons,” McConnell replied. “Coach Beilein is a great coach and person, it’s a good program to be in and a top academic school.”

New Hampton coaches sent film of McConnell to the Michigan staff and McConnell committed after an unofficial visit to Ann Arbor.

John Beilein has emphasized the importance of a core group of walk-ons as part of the program’s foundation and seems committed to adding quality players and people. Michigan will also have six players from the state of Indiana on its roster next season.

“Our recent success has a lot to do with the outstanding contributions we have received from our non-scholarship players Josh Bartelstein, Corey Person and Eso Akunne,” said Beilein. “Andrew and Cole fit that same mold. They are talented and hardworking student-athletes and should be able to come in and help us in many ways both on and off the court.”

Michigan will face UMass Lowell on November 8th at Crisler Center, which will be the River Hawks first game as a Division I basketball team. Lowell head coach Pat Duquette is excited for the opportunity.

“I think it’s great for our players,” said new UMass Lowell head coach Pat Duquette, who was hired last week. We are really excited for the opportunity, especially with Michigan coming off its run in the NCAA Tournament. We have to let everyone in our program know that this is what Division 1 is like.”

Spike Albrecht might not be attending prestigious Nike All-American camps this summer but he found time to give back at Crown Point’s basketball camp. The Post Tribune profiled Albrecht’s off-season and his goals for improving on last year’s run.

“Because of my size, I never thought I’d have the chance to play at a Big Ten school,” he said. “I’m not surprised. I knew in my heart I could play with those guys. I just feel blessed that it happened.”

Spike turned into a national sensation in about 45 minutes. His Twitter followers went from around 5,000 to 40,000. The biggest bump came after he tweeted Kate Upton, a Michigan fan, that he “hoped to see her again.” When he came back to Crown Point, Albrecht threw out the first pitch for the local little league, he was the starter for the “Hub Run” and the mayor officially recognized him at a City Council meeting.

“One of my coaches told me, ‘don’t let scoring 17 points in the national championship game be the best thing in my career,’ ” he said.