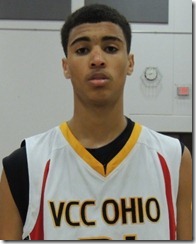 Trey Burke’s alma mater made the trip to Ann Arbor from Columbus for Michigan’s team camp and Northland didn’t disappoint.

The Vikings feature Seth Towns, a 2016 forward who’s already 6-foot-7, and the youngster showed off a versatile game while helping Northland to a 4-1 weekend at camp.

Towns wasn’t the focal point of his team’s offense, but he displayed a smooth jump shot that he can hit from range. The Columbus native spent most of his time on the perimeter, though his handles need work — he got it stripped a few times near the 3-point line and also in the paint.

Shooting is Towns’s specialty at the moment — even his go-to post move appears to be a fadeaway that’s quite reliable. But he could greatly expand his effectiveness is he worked harder on the boards. It’s difficult to rebound consistently when spending most of your time near the 3-point line, but it was an area of the game Towns could improve in.

During Northland’s third game on Saturday, all three assistant coaches were watching the Vikings. In front of Bacari Alexander, Jeff Meyer and LaVall Jordan, Towns ran the floor well, hit a fadeaway in the post, and a smooth midrange jumper off a nasty crossover. His team won handily.

On Sunday, Northland hit the court against Westfield, and Towns was once again impressive. He was more aggressive on the glass and taking the ball to the rim, but his bread and butter is his jump shot. Towns finished with 10 points in the first game Sunday, and got some one-on-one time with Bacari Alexander afterward. Northland lost its final game, its first loss of the camp, and Towns was kept mostly in check.

Here’s footage of Towns in action earlier this summer at the Super Sophomore Camp.

In the first Saturday game, both teams played a suffocating press, and it appeared to fluster Kennard in the instances when he was called upon to bring the ball up the floor. The pressure defense forced Kennard into some poor decisions with the ball. While Kennard’s handle is obviously impressive, he tends to allow defenders force him into bad passes.

Although Kennard’s impact was contained in game one, his team came away with the victory thanks in part to some timely rebounding from Kennard in the game’s closing minutes. After corralling a missed free throw by one of his teammates, Kennard got the offensive rebound and was fouled going back up. The 6-foot-6 guard made both from the charity stripe to put his team ahead by one, a lead Franklin would hold for the victory.

During Franklin’s second game of the day, Kennard was solid. In a style reminiscent of Friday’s action, Kennard was responsible for his team’s first eight points — and the points came in typical versatile fashion. After finding a cutting teammate on a drive to the hoop, Kennard hit a pull-up 3-pointer. He then followed that up with an impressive and-1 drive to the basket and made the free throw. Kennard finished the game with an unofficial 15 points, but unfortunately Franklin couldn’t quite pull out the victory.

It was on Sunday when Kennard was truly spectacular. In a game that unfortunately ended in a loss for Franklin on a last-second 3-pointer, the talented swingman did all he could to will his team to victory. He ran the floor for fast-break points, racked up offensive put backs and hit every one of his free throws. But he truly put on a 3-point shooting clinic in the final minutes, hitting two highly-contested step-back bombs to give his team a fighting chance. When the smoke cleared, Kennard had an unofficial tally of 33 points.

I only watched one Southfield Christian game near the end of the day Saturday and Bakari Evelyn was his impressive, consistent self. In front of all three assistant coaches plus Derrick Walton. Evelyn shot the ball well and ran pick-and-roll action to perfection.

Evelyn was consistently aggressive and looking to score — even though he’s not the biggest player, he is very strong with the ball when he drives to the basket and is a solid finisher around the rim. His shot is funky but it goes in — he finished with four made 3-pointers for an unofficial 14 points.